Getting There Is Half The Fun, Sort of. But Not Really. Being There Is Really Most of The Fun.

The NYC trip my family just returned from was a long time in the making. It was our first real family vacation in several (six?) years. I don’t count our four days in Chicago in December of 2007 or our two nights at Key Lime Cove in March of 2008 as “real vacations”; although we had a great time, they were “Stay-cations” because we didn’t get out of our home area.

Jim and the boys had never been to NYC, and I was dying to show it to them. We’d been going back and forth on whether we would actually get there this spring break; with the economy the way it is and us trying to watch our pennies in case anything should happen, we almost didn’t go after I discovered that hotel prices were still just as crazy in Manhattan as they ever were (no surprise), and there was no break to be had unless we stayed in New Jersey. Not gonna do it. Nothing against Jersey, but staying IN Manhattan is part of the fun. Plus, taking the train each way all the way to Jersey is mighty inconvenient, time-consuming, and a pain if you want to drop packages off at your hotel room or if you just want a short nap or something.

Then, a couple of weeks after we told the boys we wouldn’t be going after all, I decided to check hotel prices again. Some of them were HALF of what they had been! Yippee! The trip was back on! We got all four of our plane tickets with frequent flier miles, and our room in Midtown Manhattan was $144 per night, instead of more than $300 for that particular hotel. VICTORY!

And so we started making our plans. There were many places that I definitely wanted to revisit with my family, and Julesie had set us up with a bunch of new adventures too. We would definitely be busy. In addition to all of the ahead-of-time prep, I had to buy something that would become INVALUABLE in getting around New York City. Pay attention, those of you who are going there sometime. This is important.

Get the Streetwise Manhattan map. It’s laminated (STURDY: you’re gonna need that feature!), you can get it at the bookstore, and it looks like this: 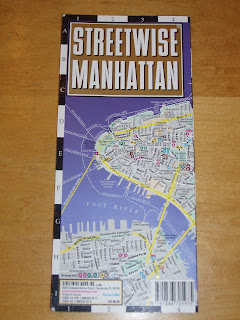 It unfolds and shows, in detail, the streets of Manhattan, major attractions, a bus map, and subway lines. If you’re going to NYC, you HAVE to have this. The Streetwise maps come in lots of other cities too, FYI. (I have Chicago too, and use it all the time!)

Other than getting my handy-dandy map and packing up, the things I had to do AHEAD OF TIME were: making reservations at Serendipity 3 (if you have no reservations, plan on a long wait!), buying our tickets for the Statue of Liberty, and buying our tickets for the Gray Line Double Decker Bus Night Tour. As you know, I’m an extreme planner when it comes to a trip like this. In fact, recently Jim and I had a conversation about how I am a “Fun Planner” and he is a “Work Planner”. I guess that means he gets more done, but I have more fun! Yuk yuk yuk. Anyway, I wanted to plan what we had to for this trip without planning every spare moment. It’s vacay after all!

And then, suddenly, it was time to go! Yay!

Although I don’t plan on writing these posts chronologically (because “We did this, then this, then this…” would get super boring!), I have to start with what we did first. After that, you’ll get chunks of the trip in random selections!

When we arrived, we jumped in a cab (they take credit cards, FYI), headed to the hotel, and…couldn’t check in. Too early. But they stored our bags under lock and key, so we took care of that and jumped right on the subway, heading to Brooklyn. (I have to add here that I was very proud of handling our first transfer from one subway line to the other, within an hour of arriving in town. Yay me!) The plan? To eat at Grimaldi’s Pizzeria (more on that in another post!) and then WALK back to Manhattan on the Brooklyn Bridge. (Note: if you’re watching your pennies on a NYC trip, this was a super-cheap activity: it cost us the pizza lunch–around $25–and one way on the subway for 4, which was $8. That’s it!) I thought it would be a great way to start the trip, and the weather was fabulous on that first day. The views of Manhattan were spectacular. Naturally I have photos! 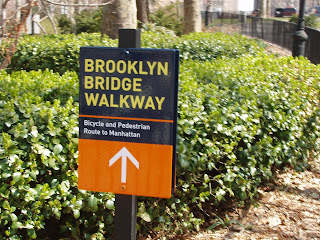 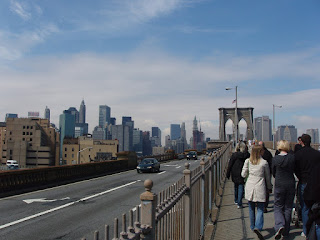 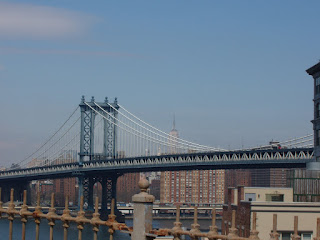 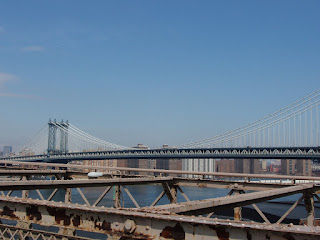 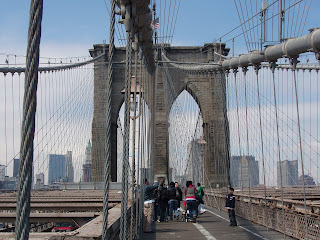 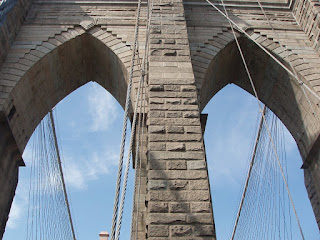 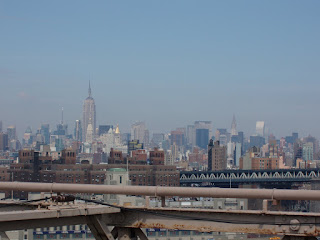 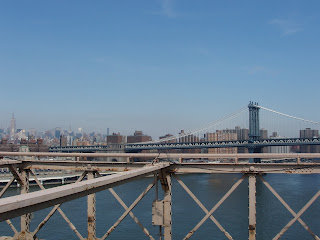 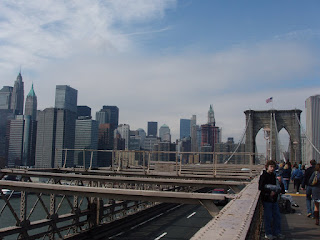 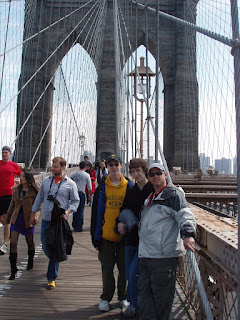 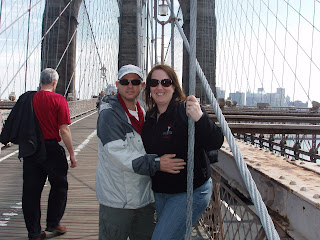 What an unforgettable experience, and it was indeed the perfect way to start our NYC trip! Stay tuned!

Previous post: This Is Not Just Any Old Blog Contest…