Boy Scouts Should Really Be a Dad-Son Thing. Unless Mom Wants In.

Note: This post is part of Fatherhood Friday at Dad Blogs, where all the cool kids are hanging out. (Moms are welcome over there!) Welcome to my visitors from DB; thanks for stopping in!

I always looked at Boy Scouts as something Dads should do with their sons. Still do, really. I think it’s important for sons to spend time with their father, quality time in which there is learning, male bonding, role-modeling, and other various benefits that come from the mom not being around. The fact is, because of our mostly traditional family situation (Jim has always worked full time and I have always–except for a two-year period during which it was necessary for me to work full time–worked part time), I’m the one that has taken care of most of the involvement at the boys’ schools. (That was mostly in elementary school. It tapered when they each became middle schoolers and now, when I’m at the high school, I have to be careful that I say hello to teachers in an acceptable manner or not at all, of course!) In the elementary school years, I was the room mom for each of their classes every year except for one each during Kindergarten through 5th grade. I mostly loved it. I did Art Appreciation presentations, I helped with the school writing center, I took care of teacher birthday gifts from the class…the list goes on. (I even, at a “Health Fair Day” for the younger one, had my own group fitness station where I taught aerobics to small groups of fifth graders…FOR TWO HOURS STRAIGHT. I’m still sweating from that, I think!)

When it came time to start the older boy in scouting, Jim really wanted to do it. Actually, he had talked about it for years, even before the boys were born. It was sort of “there”: if we had boys, he’d take them to scouts. I thought this was awesome. I’m not an outdoorsy girl. (Surprised? I bet NOT.) I like s’mores and a lovely campfire, but only for a little while. Sleeping outside in a tent? Blech.

But it was great, because Jim didn’t push me to become involved. He became the den leader for each of the boys and eventually an Assistant Scoutmaster when the older one moved up to Boy Scouts, and then Scoutmaster.

I didn’t do much. Cub Scouts was all him. I think I went out and bought the Pinewood Derby cars for the boys when the time was right. That’s it.

In Boy Scouts, I dipped my feet into the waters by taking on the job of creating the programs for our award ceremonies (Courts of Honor). Basically it’s just typing up who got what merit badge and who advanced to what rank, etc. It only has to be done once every three months. Pretty tough, huh?

A couple of years ago, Jim took on the “High Adventure Coordinator/Chairman” job in our troop. Boy Scout High Adventures are awesome trips that the boys go on when they are 14 years old or older (13 years old if the trip is not “officially put on by” the Boy Scouts) AND First Class rank. They are sort of an incentive for young scouts to work on advancements and stay active in scouting. I mean, weekend campouts are nice, but these adventures? LIFE-CHANGING. The benefit to having this job, by the way, is that by planning a trip you are guaranteeing a spot for yourself!

Jim and the older boy (at 14!) went to Philmont Boy Scout Ranch (in New Mexico) in 2006. Philmont is the best that the Boy Scouts of America has to offer in a high adventure: it’s the pinnacle of hiking trips. Ten days of high altitudes, gorgeously pristine scenery, miles of trails, the possibility of running into bears or deer while carrying 50 pound backpacks (eek!) while hiking an average of ten miles per day…now that’s adventurous. 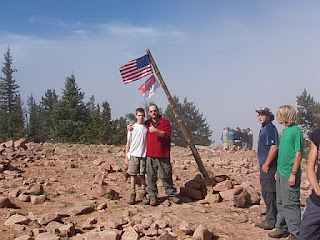 They STILL talk about it. It was life-changing. It made an already close relationship even tighter. They will carry it with them forever.

The following year, I joined Jim as High Adventure co-chair. The troop, which is boy-run (meaning the adults are basically there to do the paperwork; most of the rest comes from the boys), voted to go on a Bahamas Sailing High Adventure trip in the summer of 2007. I was told when we joined the troop that if we ever went to the Keys or the Bahamas, that was more like a “mom trip”. It was sailing, for goodness sakes. Most of what was required by the adults on this trip was hanging out on a boat while the boys learned to sail it. No campfires, no tent sleeping, no hard physical labor…

I decided that would be a good time to get involved in scouting. Just for the week.

I don’t know if it was a “mom trip” or a “dad trip”, but what I do know is that I snorkeled for the first time ever. I hung out on a Pirate Ship not only with my own son but with 7 other boys and two dads. I learned to tie knots: quickly. I cooked in a tiny kitchen. I collected shells on sandy, deserted beaches. I saw a stingray up close. I had high tea (Captain and his first mate–wife–are Brits) on board. I spent an afternoon just sitting in the water just off shore with my two co-chaperones, watching the boys a little ways down goof off with each other and, when we looked in the other direction saw NOBODY in scenery that looked like it came from a Corona commercial. I walked the plank. 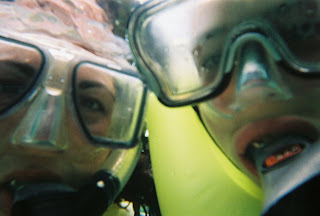 Self-portrait: Me and the older boy, Bahamas 2007

My son and I bonded and still talk about it. It made an already close relationship even tighter. We will carry it with us forever.

And then it was Jim’s turn again. Last year, when the younger boy was finally old enough to go on a High Adventure, the boys in the troop voted on Sea kayaking at Tybee Island, Georgia. Though it wasn’t Jim and the older boy’s “thing”, they decided afterwards (they prefer hiking!), they still had a great time. Their base camp was on an isolated beach and each day they went out sightseeing in their kayaks. They can actually say they kayaked in the ocean. They still talk about it, and they bonded, of course. Another lifetime memory. 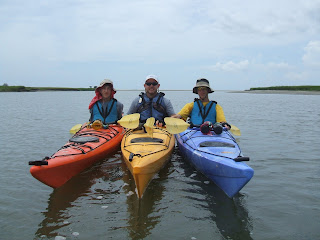 This year, they’re going back to Philmont. All three of them. The two Philmont vets can’t wait to show the younger boy the sights out there. They’ve been doing training hikes for a few months now: it takes preparation. I can’t wait to hear their stories when they come back. It is these kinds of adventurous trips that the boys are preparing for (and don’t even know it) from the time they are young Cub Scouts. Jim has been at their side the entire time, and it’s been awesome.

Our older boy is getting ready to complete his Boy Scout Eagle Project this Sunday and next. The Eagle is the highest rank in Boy Scouts, and is one of the only accomplishments–if not THE only accomplishment–from high school that he will be able to keep on his resume’ for the rest of his life.

At his Eagle Court of Honor (hopefully later this summer or in early fall), our guests will be friends and family members along with the scouts in our troop. Many people who have given him a hand in his scouting journey will watch him attain the Eagle rank. Stories will be told about his experience, and there will be a table full of his personal scouting memorabilia for everyone to look at. It’s going to be an amazing afternoon.

And nobody in the room will have a bigger smile–or be prouder–than Jim, who has been with him every step of the way.