Happy Purim to all of my Jewish peeps out there! I posted the background behind the holiday last year, so to save time, I’m linking it right here. Last night we went to the Megillah reading at the temple, and it was a total blast. Last year’s reading was fun (click here to read how that went), but this year was a little more fun. It’s always a great time to get together with the other families in our community, but Purim is extra-fun because it is supposed to be wild and crazy. Last night was extra-noisy. There were whoopie cushions, musical instruments, and other various noisemakers (we call them groggers) to drown out the name of the bad guy in the story.

The beginning of every other service during the year includes a request to PLEASE turn off all cell phones and other electronic devices which would be a distraction to the prayer environment. (You’d be surprised at how many cell phones still sound off, even after a request like that!) Last night, though, one of the prayer leaders said, “Before we begin, I’d like everyone to turn their cell phones ON! If you have a Blackberry, that’s even better! Start texting NOW!” Hilarious.

The service, besides reading the story of Esther, includes prayers at the beginning and the end. The hilarious part about Purim is that many of them are sung to the tune of different songs, like “Take Me Out to the Ballgame” or “Somewhere Over the Rainbow”.

There was a high element of family participation in reading the various parts of the story of Esther, too. Some of the families have become a Purim tradition around our shul, reading the same part (or acting it out, or singing about it, etc.) each year. We have one family who wrote great new lyrics to “Come Together” by the Beatles, obviously Purim-themed. They perform it as a community sing-along, complete with their son accompanying the music track on his electric guitar. Another family wore snuggies for their turn up there. My second grade co-teacher sang a different version of “Cheek to Cheek”…to a Hamentaschen!

At one point during the noise, my friend turned to me and said, “Oh my gosh, look over there! Look at his grogger! It’s huge!” She meant it literally; the guy DID have a huge grogger/noisemaker. The biggest we’ve ever seen. We were in hysterics, because if you take that a little out of context, well, I’m sure I don’t have to explain it to my audience. I think our laughing was a little louder than the rest of the noise; it was uncontrollable.

Out of all of that insanity, there was a poignant moment for me. A little boy who couldn’t have been more than 5 or 6 went up to read (in English) a passage from the story. He had to stand on a stepstool in order to see what he was reading, and every time he came to the bad guy’s name, which everyone had to drown out, his eyes would sparkle and he’d scream and laugh and look at the whole congregation of people making noise basically at his command. I was struck not only by how good a reader he was for his age (he had some pretty big words in his passage, and needed very little help!), but at the joy and wonder in his eyes while he took part in a traditional activity that has gone on for generations and generations. He reminded me a lot of my boys when they were little tykes: 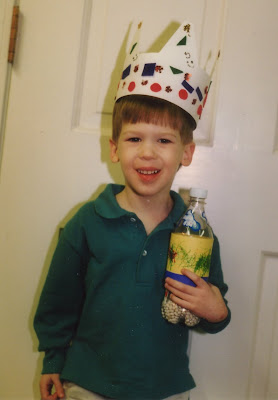 And that, once again, brought it all home for me. The very survival of my religion, because our numbers are relatively small, hinges NOT on trying to convert others (that’s not how we roll), but teaching our own children the stories and traditions that have been the foundation of Judaism since the very beginning. L’dor Vador means “generation to generation”, and that concept was bolded, italicized, and underlined for me last night as I watched the children of our temple carrying on our community traditions. It was lovely!