How To Walk Your Feet Off In Six Hours or Less

I had an awesome time on Sunday. Kate flew in (and boy, were her arms tired! Ba dum bump!) for a conference in the Chi. When she made her hotel reservation a while back, she called me and said something fabulous:

“I got a room with two double beds so you can spend Sunday night in the city with me!”

I excitedly departed religious school early, my class left in the very able hands of my co-teacher, and headed to O’Hare so I could pick her up by 10:45 a.m.

Kate loaded her bags into the trunk, got into the car, and hugged me as she asked, “Well? What’s our plan?”

You should have seen her face when I told her I didn’t have a plan, other than walking around.

“What?” she asked. “You ALWAYS have a plan!” (I’m not a very spontaneous person. I planned the daily activities of our Europe trip as if I were a travel agent trying to get the most out of every minute. Surprised?)

“Nope,” I said, admittedly nervously. “I thought we’d fly by the seat of our pants!”

“Well, do you at least have a plan for dinner?”

“No!” I exclaimed, as if not having a place in mind for dinner was going to win me some kind of award. “Isn’t it AWESOME?”

She was cynical. I think I made her nervous. The only plan I had was walking and talking. When you are spending time with someone special, it really doesn’t matter what you do, right? We had until 9:15 on Monday morning, when she would have to go to her conference and I had to get home to the burbs.

We parked at the hotel and headed out to Michigan Avenue on foot; we’d check in later because the room wasn’t ready yet. Basically we walked for five and a half hours, starting at Grant Park, heading up the Mag Mile all the way to the John Hancock Building, and then back south towards Marina City, down Randolph to State Street, and back to the hotel. We shopped along the way, and by the time we sat down later, the soles of my feet were on fire.

I thought that she might enjoy seeing “Cloudgate”, which we natives call The Bean. As you might recall, Kate has a Bean of her own, but she’s much smaller and smarter than the one at Millennium Park. 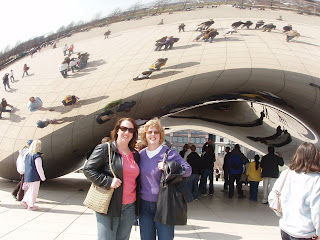 I showed her Tribune Tower, which I wrote about for Chicago Parent magazine last year. She was intrigued AND disturbed by the artifacts embedded in its outer walls. “HOW did they get these? Was this legal? Are they even real?” The story is that correspondents for the Chicago Tribune “brought them back” for Colonel McCormick. That’s it. Hmmm. I may have to research that a little more.

We made stops at Corner Bakery for a drink and a lemon bar (yum) and later in the walk, stopped at Wow Bao in Water Tower Place, which I Love with a capital L, and got the perfect little snack (a bao, of course!) to keep us going.

We visited Filene’s Basement and found practically nothing this time. Oddly enough, though I only go to Filene’s with Kate (even if I’m in the city with others and they want to go, I say “Nope, sorry…I ONLY go with Kate.”), we split up inside, paid for our stuff, and when we asked each other for show and tell, discovered that we both bought a nightie. (not the same kind though) Funny! (or not)

We hit Marshall Fields on State, which is now Macy’s but I don’t call it that. I gazed at the Tiffany ceiling and then stood next to her as she bought cosmetics. (I didn’t spend money there, because I’m mad at Macy’s for taking over Marshall Fields. Pooh pooh pooh!)

We stood in line for what seemed like forever to get bags of Garrett’s caramel corn, which is to die for.

Of course we visited tons of other stores, but I sense your drowsiness so I will move on. We checked into the hotel and she handed me the second leaflet that the reception guy gave her for the conference. She whispered, “Pretend you’re going to the conference!”

So I told her I would, but only if I could pretend that I also earned my Ph.D like she did.

“Of course!” she said. Only your best girlfriend would make that accommodation without laughing her booty off at the ridiculous suggestion.

So here’s the best part. Our hotel room at the Hilton, with double beds? It had TWO BATHROOMS. Yes, you read that right: TWO. See? 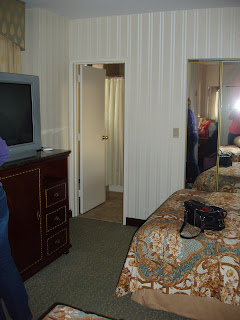 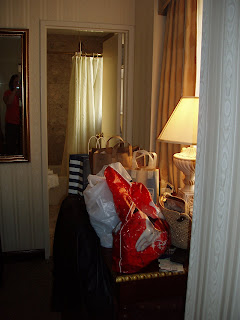 All those bags, by the way? Mostly hers. She said she came prepared to help the economy.

So we relaxed on our beds and chatted excitedly about our two bathrooms (doesn’t take much, people!) before having a great little dinner at Flaco’s Tacos including one margarita each, and the party animals that we are, retired by 10:30.

The next morning went quickly, with breakfast at Eleven City Diner (YUM! I had matzah brie) and then it was goodbye. Much too short of a visit, but we had an excellent time.

I don’t think it could possibly have been any more fun than it was…even if I had planned for it.