There are a lot of people out there (myself included) who love to get little tips on how to make life just a little bit easier. Anytime I come across a magazine that has a “Reader to Reader” section (I believe “Family Circle” and “Family Fun” are two of them that I have devoured many times), I am in heaven. Sometimes the tips are no-brainers to me; sometimes I feel like I’ve found buried treasure.

It’s for that reason that I decided to add another sporadically appearing feature here at the Scrawl: Happy Homemaker Tips. You won’t see any Martha Stewart-ish complexities like labeling the shelves of your linen closet so you don’t forget where you put your extra pillowcases…just things that are super-easy to do and require very little effort. In fact, there will probably be a majority of you who already do these things; I don’t expect they’ll be new to everybody. But you know what they say: helping even one person is…? (I forgot what they say about that.)

Making a bouquet last about three times longer (could also be referred to as “Stretching your Floral Budget”).

Jim brought me a HUGE, gorgeous bouquet of flowers for Valentine’s Day. Look at it: 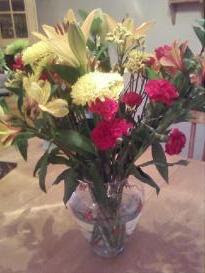 As you know, these bouquets start to look a little bit wimpy in about a week. I make it stretch by rearranging the longer lasting flowers like the carnations and the alstroemerias in a smaller vase and throwing away the now-icky-looking lilies and other wilting flowers. This is a photo that I took YESTERDAY, February 28, two weeks after I got the original bouquet*: 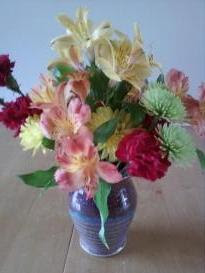 As long as I keep adding water to this, I can make these flowers last at least another week. When the alstromerias die, the carnations will mostly still be fine. That’s when I’ll either pull out an even smaller container and rearrange them, or I’ll cut the stems off of the carnations completely and float them in a pretty glass bowl for another day or two.

So, the next time your flower bouquet is looking a bit sickly, don’t assume they’re all gone: see what you can salvage from it to make something “new”!

*I sent Kat a vase just like this one, except it’s in greens (her favorite!). The vases were hand-thrown by a potter in the Smoky Mountains of Tennessee and match my dishes. We started collecting dishes from the Pigeon Forge Pottery a few years ago because they’re so pretty and remind me of the beauty of the mountains.

Next post: If You See Me Laughing At GNC, It’s Probably Because of This.