Creative Parenting 101: Holding Onto Your Babies, One Illegible Page At A Time

Every now and then here at the Scrawl I like to throw in a “Creative Parenting 101” post. It’s been a while, and I thought that Fatherhood Friday would be a good day to bring it back this week.

Whether you are a parent or not, you absolutely know that each little bit of childhood is a fleeting thing. Once those crazy kids grow a bit and move beyond the current stage they’re in, it’s all over (most of the time! I’m not talking about when they move out and then move back…). That’s why I have mentally frozen moments in time for my own selfish purposes; for example, I vividly remember walking with the younger boy, his little hand totally enclosed in mine. I thought to myself, “I have to remember that today, his whole hand fits inside mine.” I’m glad I took that moment to consciously mark the memory in my brain. We spend so much time just trying to take care of everything and everybody that we don’t often pause to absorb what’s truly joyful at that moment.

Obviously it’s impossible to keep your kids little forever, and frankly, who in their right mind would want that? (I’ve always said that I enjoyed each and every stage better than the last one, until the boys each hit puberty. Then there was a big, annoying bump in the road…and then we could enjoy them again.) Some things, however, are precious and there are tangible ways of reminding yourself about them.

I wrote a while back about the older boy’s Thankful Journal. That was awesome and I’m so glad I have it. I found something else I wanted to share, today while I was checking out the suitcase situation in preparation for our spring break trip in two weeks: his scrapbook.

I was up to my ears in the scrapbook craze just as it was getting hot in the ’90s. As the mom of two little ones, however, I didn’t get alot of time to drag out all of my supplies and sit there like a busy bee.

At some point, I got the bright idea to get the older boy his own scrapbook and have him make his own while I did mine (the younger boy would be napping).

I took him to help pick out his own scrapbook, and the first thing I had him do was draw a family portrait. Priceless. 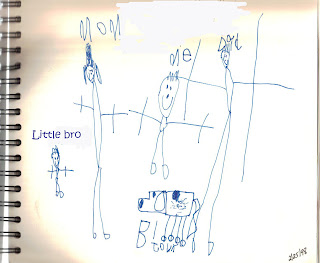 After that, we pulled out some photos that I took, extras that he could use. He attached them to the pages and then dictated what he wanted on the captions to me, and I wrote it so it was legible.

Then, later, I thought to myself, “Are you nuts? He can write. Not well, but he can write! And he can take pictures!”

We got him a camera before our trip to Disney World and, when we returned, he and I got back to scrapbooking. He only ended up doing about 15 pages in the entire book (first graders get busy, you know!), but I treasure them dearly. Here are two samples: 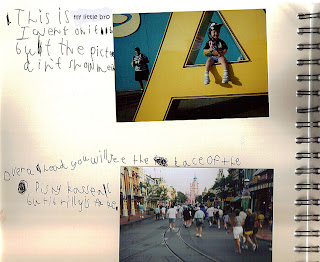 Translation, in his words:
(Top photo) This is “insert name of little bro here”. I went on it (the “A”) to, but the picture din’t show me in.
(Bottom photo) Over ahead you will see the kace (cake) of the Disny kasseall (castle) but it rilly is fake. (FYI, for WDW’s 25th anniversary, they remodeled the outside of Cinderella’s castle to look like a giant cake) 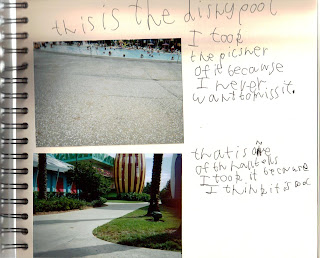 (Top photo) This is the Disny pool. I took the picsher of it because I never want to miss it.
(Bottom photo) That is one of the halltells (hotels). I took it because I think it is cool.

Not only is this stuff fun to look at, but it’s great to have your child’s perspective on what’s important to them at various stages in his/her life, like cool halltells.

I could go a step further and add how allowing your child to help you with the seemingly important task of scrapbooking not only enhances your time together, but might possibly even build self-esteem…but I won’t. Wait, I just did.

Next post: If You See Michelle, Just Tell Her You Heard We Had a Terrible Time.