This Post Is Brought To You By The Letter R.

I was reading one of my favorite blogs when I discovered what *might* be a meme. I’m not sure, though. I actually volunteered for it and will not tag anyone at the end of this post either. Therefore, you yourselves can decide if it is a true meme. Basically, you get a random letter of the alphabet assigned to you, and you write about ten things that start with that letter, things that you just adore.

After I finished reading the post over at Eternally Huckdoll (LOVE her.), I left a comment basically saying, “Yeah, gimme a letter!”

Huckdoll gave me “R”. I was really excited, because I thought, “I can think of, like, five things right off the bat that begin with R that are really important to me!”

And then it took me longer to come up with the other five. But that’s okay: I’m a thinker.

1. Remembering Ruby: Hey, what do you know? Huckdoll gave me an opportunity to do some self-promotion! A couple of you may not know that I have actually published a book about pet loss. The whole title is Remembering Ruby: For Families Living Beyond the Loss of a Pet. 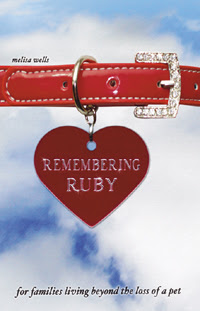 It is a children’s/family story (true story, our story!) about the loss of the family beagle, and how the family deals with it together. It is full of black and white photographs of our journey with our first dog, Bijoux (Ruby, in the book!). My ever-talented sister Julesie did the gorgeous cover, the design on the inside, and kept me from losing my mind during the process. (Believe me, I was pretty darn close on several occasions!) I’m not saying this only because I wrote it, but this is a phenomenal book. (hee hee) Here’s the Amazon listing if you want to, oh, say, buy one?

2. Roxie: Yes, yes, yes. I must always mention Roxie after I mention Bijoux or else she gets jealous. She is my little devil dog, who has actually started to mellow quite nicely now that she’s almost five. You can search this blog for “Roxie” if you haven’t already read too much about her. The other place you can find her is on my lap, most often when I am typing stuff here at the computer. 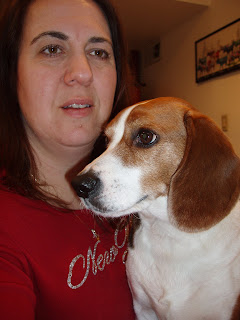 3. Red: My favorite color. I love it. I think of it as my “Power color”. I almost always get compliments whenever I wear red, and I’m drawn to red things, especially cherry red. Although my current car is black, the two before it were red. Here is what it says about the color red at Astrostar.com:

Characteristics: A person who likes red can express many personality traits. The positive ones being passion, energy, and money making. The darker manifestations of those who favor reddish-brown colors can be addictions such as drugs (um, nope), alcohol (uh, no again), eating disorders (nah) or emotional instability (hmm. Let me think. I’ll say mostly no, but lately: possibly. Ask my family.). Red-oranges are dynamic people persons who love the outdoors.

High emotions are characteristic of those who like red with blue overtones. They can be energetic people to be with (Teach group fitness classes much?). Red personalities are seductive. Men are attracted to a woman wearing red regardless of how good looking she may be. Business people who wish to stand out wear red to meetings, expressing their desire for power (I told you!) and control (Who, me?). They crave the attention (oh, is that it?).

The red personality makes others feel more energetic and vital. This personality may have a volatile temperament but cools off just as quickly. A bit of a know-it-all (HEY!! What ‘chu talkin’ bout, Willis?), the red person is quick to give others answers to any question (Sorry about that). What they don’t know, they will find out (Google!), as they are terrified of appearing stupid (Terrified isn’t the word for it…). They want everything done in a hurry. They are expert power nappers when they run out of energy and then bounce back as before (Totally).

Red personalities feel all powerful and convince others that they are but they do not make good leaders (I resemble that statement). Under proper direction, they do make good followers and have no problems doing whatever needs doing to finish a job. A bit scattered (yeah, just *a bit*.), red personalities can go off on tangents, their attention span being limited. Quick minded, bright people, when focused, they can be very determined.

4. Ruby: This is not another promo of my book (See #1), but I LOVE rubies*, as in gemstones. The ruby is not my birthstone; it’s actually topaz (with whom I have a love/hate relationship). I have always just adored rubies. I have rubies on both of the rings that I wear. So pretty!

Ever since the boys were little, I’ve done this thing with the Reddi Wip. When we made ice cream sundaes, they always saw me put a little bit (okay, a bunch) of it on my finger before putting the can away. They got smart immediately and started asking if they could have some on their finger. So I start out like I’m just going to give them a little dab, and then, well…watch this.

(Thanks to the 14-year-old for intentionally filming this with me, knowing it would go up on the blog. Mighty generous. It probably helped that I told him he’d get to eat whipped cream.)

6. Royalty: It all started with the wedding of Charles and Diana. After that, I was gone. Although I am fascinated with any stories of 20th & 21st century royalty, British royalty totally rocks the house for me. I bought the VHS tapes of the weddings of Chuck and Di AND Fergie and Andrew. I bought issues of “Royalty” magazine, which I still have. I kept a scrapbook (Though I don’t add to it these days, I still have it, so I guess I could say “I keep a scrapbook”) about them. Thanks to our season’s passes for the 1982 Worlds Fair in Knoxville, I spent lots of time at the UK pavilion, fawning over Charles and Diana souvenirs that I totally wished I had money to purchase. I even did a report on Prince Charles for 10th grade English: 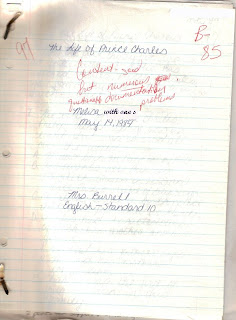 I remember where I was the night Diana died. I watched the funeral, and still keep tabs on her sons as well as the other British royals.

The ladies wear tiaras, you know.

7. Rain: I love the smell of rain. I love being home on a rainy day. I love sitting on the couch with Roxie on a rainy day and looking out of our huge bay window. Love it.

8. Reality TV: I’m a sucker for it, and would watch way more of it if I weren’t considerate of my family. There is a huge tv divide in this house, and we all try to watch extreme categories in moderation, because we’re nice like that. I started way back in the day with “Real World” and “Road Rules” but gave them up once they started to be about alcohol and sex 99% of the time. A little of that makes good television; too much of it and it ticks me off. Now I enjoy the reality game shows, like “Biggest Loser” and “The Amazing Race”. I could list more, but I’m not sure you want to know.

9. Rules of Engagement: This is not reality tv, but instead a sitcom that we love in this house. It stars Patrick Warburton (who played Puddy in “Seinfeld”), Oliver Hudson (Kate’s bro), David Spade (from “Saturday Night Live”, “Just Shoot Me”, and many buddy movies with Chris Farley), and Megyn Price and Bianca Kajlich, two actresses who have had many roles in other things but you might not know them.

This ensemble cast rocks, and they all take turns being scene-stealers. The new season starts on March 2 (YAY!) and is on CBS Monday nights, I’m pretty sure at 9:30 p.m. Eastern/8:30 p.m. Central. Watch it!

10. Riverwalk: I love riverwalks. My town has one, and it’s lovely. I like the sound of the water and all that jazz. It’s quite relaxing to go there. 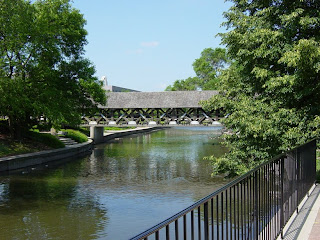 Now, it’s your turn…only if you want! Leave me a comment if you want me to assign you a letter. If I don’t have your e-mail address and it’s not somewhere on your own blog, be sure to leave it here…otherwise you’re outta luck! Any takers?

*In case you were wondering, I used the name Ruby for the dog in my book because Bijoux (bee-shoo) would be too hard to pronounce for little kids trying to read the book by themselves. Bijoux is actually a French word that means “Little Jewels”. Hence, Ruby. Cool, huh?