Several years back, Jim and I had a big double date planned with our two fabulous friends, Scott and Dawn*. This wasn’t just any old “girls beat the boys’ pants off at cards” kind of date like it usually is; it was a REAL date: a “get dressed up, head downtown for a nice dinner and a musical” kind of date.

I can feel Nukedad, Tom, and the other guys clenching up a bit at the thought of enduring a musical, but wait. This one had a plot thick with historical significance, and was not a chick flick-style show like, say, “Legally Blonde: The Musical!” 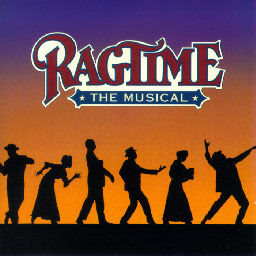 The girls were definitely excited about it. I had actually already seen the show twice: once on Broadway and once with Jim in Chicago. Jim really liked it, so he was up for a second time. Scott? Well, let’s say that we made our dinner plans with him in mind so he’d look at the show as only one part of the evening.

The plan? To take the train from here in the burbs to Union Station. Dinner at the Butcher Shop steak house on Ontario (which is now closed, unfortunately: we loved that place!) and then on to the show!

The train part went well. We had some time to kill before our dinner reservation, and Dawn was wearing shoes that were somewhat uncomfortable, so we decided to get some coffee (well, not ME) at the train station and hang out there before heading over to the restaurant instead of roaming around outside.

We were having a great time already, and Dawn and I were just hoping that Scott would like the show (we knew that Dawn would!) so we could do this again, and he was keeping quiet about it but he really was NOT looking forward to it like we were.

…and then, as he was talking, Scott gestured with his hand, knocking his coffee over and splashing his light beige shirt, his tie, his khaki pants with espresso.

We were all silent at once, looking at his shirt. Oops.

Dawn and/or I probably exclaimed “OH…MY…GAWD…”

Scott is so easygoing that he just said, “Aww, it’s okay. It’ll dry.”

We knew that somebody who was only going to see “Ragtime” to have a nice date with his wife and friends would be totally self-conscious about his coffee-stained shirt, so I said, “What time is it?”

After determining that we still had about an hour before our reservation, we dumped the coffee cups and ran upstairs and outside. We hailed a cab, and I got to do something I never knew I wanted to do, but boy was it thrilling to do it:

I exclaimed to the cab driver, “TAKE US TO MICHIGAN AVENUE!!!!!”

Dawn and I giggled during the entire ride over to the Mag Mile, where we got out of the cab at Eddie Bauer, which is what Scott was wearing. The hilarity of this situation was just too much to handle.

Jim and I strolled around in the store while Dawn helped Scott find an almost identical outfit. He tried it on in the dressing room, ripped off the tags, paid for the new outfit, and then we were good to go.

We ended up walking the 3/4 mile to the restaurant from Michigan Avenue, poor Dawn hobbling all the way on those awful shoes, laughing and making a memory out of one little evening in our lives that we’ll remember forever.

By the way? Scott liked the show.

*As always, I expect that Dawn will correct, add, or modify this story in the comments if I left something out!