A Penny Saved Is A Penny…Wasted?

I have this little habit that annoys Jim to no end. I use change*. I will, if I can do it quickly, dig correct change out of my purse when I’m paying for something so I can get dollar bills back…and NOT more change. If I’m going to get change back no matter what, like if my purchase costs $4.62 and I’m paying with a $5 bill, I will actually try and locate twelve cents in the bottom of my purse so I can get two quarters back instead of three pennies, a dime, and one quarter. He thinks that’s a waste of time, and could care less about getting change back. I’m okay with that, for him. (Nice of me, don’t you think?)

I had no idea how or when I started doing this, though I have vivid memories of going to the mall with a friend when I was about 8 or 9 (back in the 70’s it was nothing unusual to let kids of that age walk around the mall alone!), stopping at the new in-the-mall McDonalds, and paying for my cheeseburger and fries with ALL PENNIES. If that happened today, I would have been beaten fifty times with a wet, smelly dishrag handed over by the McD’s dishwasher in back. But back then, though I held up the line while the cashier counted (and sighed), it wasn’t a big deal.

Or maybe I was too young to notice. Bygones.

Anyway, the point is, I firmly believe that there is nothing wrong with spending change. Even the beleaguered penny.

Use what you’ve got, you know?

Recently, the older boy and I were putting stamps on some outgoing mail for his Boy Scout Eagle project. I didn’t have enough 42-cent first class stamps, but I DID have some in smaller amounts, so we set about putting stamp combos on the envelopes. For the most part, it wasn’t crazy amounts, mostly no more than two stamps per envelope to make sure there was enough postage. On one or two, I had to put four stamps on to get it right. He looked at me and said, “You’re kidding me, right?” (He gets it from his father, I guess.)

I said, “Hey, no big deal…one stamp or two, the letter will get there either way.”

He shook his head and kept stamping.

And I kept giggling.

A couple of days ago, the younger boy got a birthday card and a couple of gift cards from my parents. I laughed my head off when I opened the mailbox. 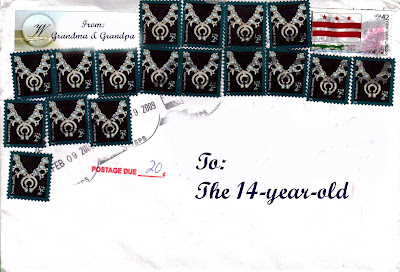 *That is, on the rare occasions when I carry cash. These days, I use my debit card 98% of the time. I miss cash.