Let Your Shirt Do The Talking.

In our house, we love us some funny shirts. Katie commented on the older boy’s shirt in my last post, and I wanted to show off the whole thing: 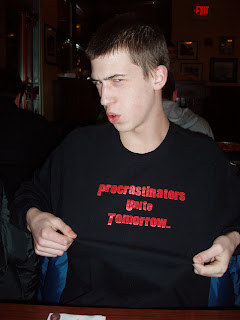 There is no other shirt more perfect for him. (To be honest, I should be wearing one just like it…)

We picked up that shirt at Steve & Barry’s, before our store closed. We also got one for the younger boy: It says “I’m huge in Japan.” Funny stuff.

We once bought the boys “Guess What Chicken Butt” t-shirts to commemorate something that drives Jim and me nuts: the kids, for years, are constantly asking us “Guess what?” Constantly. More than you can imagine. So we started answering them, “Chicken Butt.” (no, we did not make that up) An example? Here’s how it goes:

Boy: *sighs in exasperation* and then decides to either walk away or move forward with the conversation…

Julesie is a pro at picking out shirts for the boys, too. For example, this year for Hanukkah she bought the younger boy a hilarious “Haiku” shirt. Check it out here.

She also got the older boy a really cool shirt that has four curse word substitutions on it; it’s one of those optical illusion-style shirts that fool people up close but when they step back several feet they can see what it really says. I can’t remember where she said she bought it but if I figure it out I’ll post the link. (Though many of you have kids in elementary school, so you’re probably not caring much about that one! Big hit at the high school though! LOL)

To summarize, let your shirt do the talking for you. T-shirts make great gifts because they are personal, relatively inexpensive, and come in thousands upon thousands of designs.

This message brought to you by the T-shirt Association of America. (not)