Disclaimer: This New Year’s Eve Recap is not for Dork-a-phobes.

We had a GREAT time on New Year’s Eve. We were invited to the home of two of our oldest friends; actually they are our oldest “Couple” friends. (does that make sense?) Dawn and Scott live almost 90 minutes south of here and we only get together once or twice each year; although I wish we lived closer, our time together always ends up being worth the wait.

Due to the length of the drive to and from their house, I was trying to figure out who I would ask to give Roxie a potty break while we were gone when Dawn completely lost her mind generously offered to have Roxie down as part of the party too!

Ugh. Jim and I were nervous. Roxie is very socialized (she goes to play with her doggie friends at Doggie Day Camp now and then, remember?) but she hasn’t been in the car for that long–ever–and I was worried she’d either bark at Dawn’s older lab, Dutch, the whole time or just be a general pain in the booty. Also, Dawn’s other dog, another lab named Duke, passed away this summer. I was a little worried that Roxie would rock Dutch’s world, being in “his territory”. But we decided to go for it.

Challenge #1? The car ride. Normally when I take her to Petsmart or to the vet (both less than ten minutes from home), she sits in the passenger seat (in the front) and barks at people in other cars when we’re stopped at a traffic light. I have finally gotten her to the point where she will lay down and not pay so much attention, as long as I’m petting her. This time, we brought a blanket for her and the boys took her in the backseat with them. 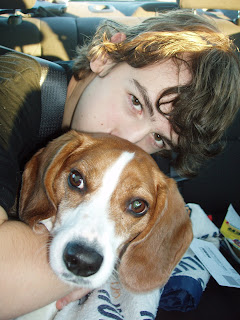 Success! She did fine.

Challenge #2? Meeting Dutch. Roxie was totally excited to get in the house and ended up ignoring Dutch, who was vigorously trying to greet her in that way that dogs greet each other. It was sort of funny: she really didn’t care about him. Relief! For a second. Then Dutch–well, shall we say–started attempting to molest her. And he was having a hard time taking “No!” for an answer: 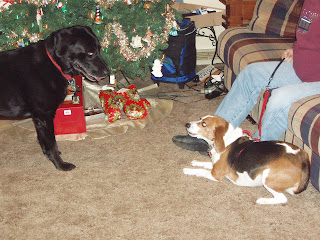 So we ended up having to separate them, so Roxie could come off the leash and we could all relax. Dutch hung out in the finished basement with the boys while they played video games, and Roxie hung out with us while we played cards upstairs. It was all good in the hood.

The guys were *totally* intimidated when I pulled out the tiaras. Totally. (and if you believe that, I’ve got a bridge to sell you.) But Dawn and I looked amazing, wouldn’t you agree? 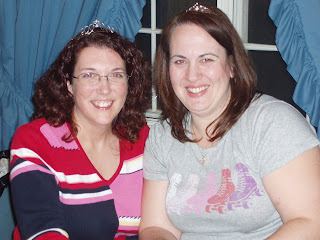 One of the best things about getting together on a rare basis with old friends is that you talk about the same things and tell the same nostalgic stories you have for YEARS. And it’s fun. We also play the same card game every single time we see each other: Spades. We used to switch up partners now and then; we’ve all been each other’s card-playing partner and I have fun no matter who is on my team…but at some point we stopped switching and it’s been boys vs. girls ever since. Dawn and I always underbid, always. We always talk about our invisible “Strategy” (the one that never works). We always cheer (literally) and clap between hands, especially hands that we’ve won. Example?

I know. We’re dorks. But proud of it. On New Year’s Eve, we found ourselves in a position we’ve NEVER, in all our years of playing this game, been in. We had one point. Uno. Eins. Une. 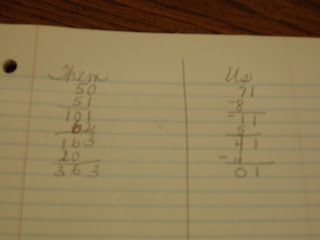 Not to worry. We didn’t.

As the evening went on, Scott pulled out some special drinkware. Seems that he collected the 2001 series of Lord of the Rings glasses from Burger King. They light up. 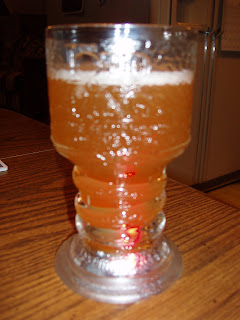 And so did we. 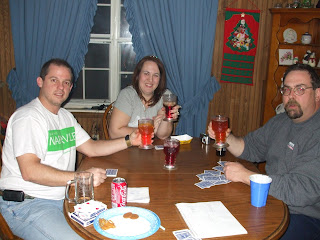 The cutest comment of the evening? When Scott declared that Jim and I are the only friends they can get together with and use these glasses. (That’s probably right.)

Roxie even felt the love, and wanted to be a part of it: 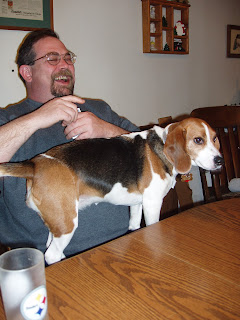 At about 10:50 Central time, we headed downstairs to watch Dick Clark’s New Year’s Rockin’ Eve with Ryan Seacrest for ten minutes with the boys, until the ball dropped in New York, one time zone ahead. I adore watching the ball drop in Times Square, and I love watching Dick Clark embrace his wife at midnight. They are adorable. 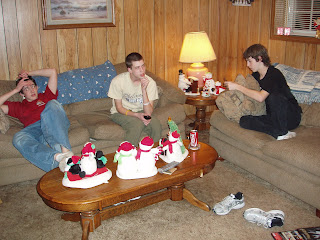 Back upstairs, we celebrated “Happy New Year” part one! (for another hour, anyway) 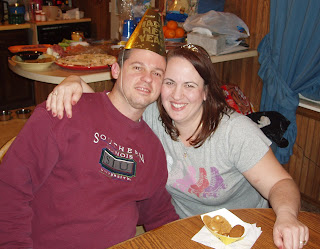 The card game went on. Watch my mad “trumping” skillz. 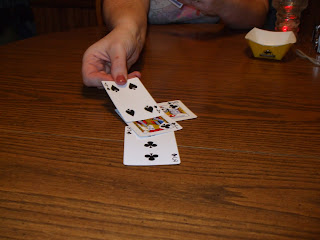 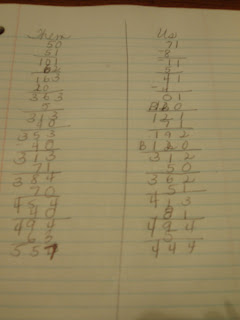 We started another game and, at close to midnight, went back downstairs to crack open the champagne and celebrate “Happy New Year” part two.

A great night, all in all. After some of these:

and some of this: 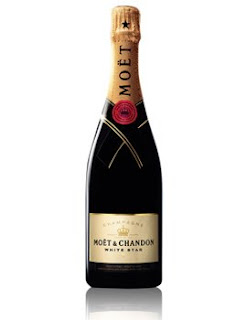 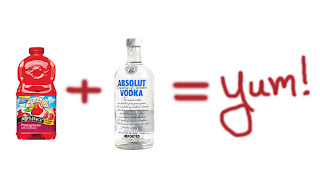 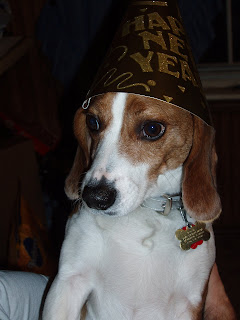 and after a while, we decided to call it a night. (We spent the night and stayed off the roads!)

There’s nothing in the world like time with old friends!

Next post: We Interrupt This Blog For Two Special Announcements…