Who Knew That Making Fun of My Boss Would Lead To a Spontaneous Bloggie Meeting?

Spontaneity? You are IN. You can leave the runway.

I was at work yesterday when I decided to send out a tweet, totally making fun of the fact that my boss (yeah, yeah, the salon owner, the one who can do whatever the hell she wants) decided to have a pedicure right in the middle of the work day, making it very difficult for the two of us to actually get some work done *together* in a rare slice of time when I’m there and she’s client-free. Her M.O. is that, from the ped chair, she will call out to me and other employees to get her things, to discuss things, to do things, yadda yadda yadda, making it difficult for anyone to really get work done.

Little did I know that Weaselmomma was just waiting for a reason to get out of the house for a while:

Five minutes later we were on the phone and I was giving her directions to the salon! (Note: If you don’t recall, a couple of months ago after each of us was aware of the other from commenting regularly at Nukedad‘s and Joeprah‘s blogs, we discovered that we live ten minutes apart!)

She came in for some much needed pampering (seriously, she has five kids.) and spent the afternoon getting her nails did while drinking wine, wearing a thermal scented neckwrap, and eating chocolate. While I couldn’t sit and chat with her the entire time she was there (I was working, after all!), I popped over there regularly and we had a great time talking. Here is a totally crappy photo: 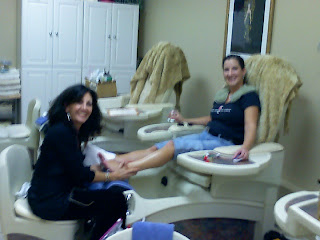 (In case you’re a newbie around here, I’m not in the photo. That’s one of our nail techs doing the pedicure, and Weaselmomma is the relaxed one with the wine glass in her hand.)

As I got to know Weaselmomma a little bit, I learned one thing that especially made my ears perk up: she actually has a drawer full of tiaras! I knew she was my kind of girl! (You should have seen her eyes light up as she talked about them!)

After she was done, it wasn’t too long before I was finished working for the day. We went over to Caribou Coffee and had a great conversation, the first of many I’m sure. We discussed alot of things, including BlogHer. We laughed as we tried to concoct a plan to save everyone money on drinks while there, and wondered how we could reserve a block of rooms so everybody in “our circles” would be neighbors. She even might bring Mr. Weasel: she told me that he thought it would be phenomenal to hang out with “all those women”. He sounds like a riot! I can’t wait for Jim and I to meet Mr. and Mrs. Weasel for the drinks she owes me from the Great Minivan Trade Up, which–by the way–is totally STALLED at what I put up to trade for Weaselmomma’s wares. Someone go dig me out, would you? Thanks.

Anyway, after a fabulous time together, it was time to part. Mr. Weasel called her, wondering if she was ever coming back home. We had to end our lovely day. We’ll meet again soon though. I can’t wait!

In the meantime, Weaselmomma, here’s an award for you. I know you are very deserving of it, so wear it proudly:

Next post: I’ll Get Back To Incessantly Talking About Myself Tomorrow…THIS One’s About You.

Previous post: Now The Search Will Lead To Me Two Times