Hold Onto Your Tiara: It’s Time For "Adventures With Weaselmomma"!

If you’re a regular reader (thanks!), you already know that Weaselmomma and I live ten minutes apart (only three highway exits!). We “met” through blogging just a couple of months ago and subsequently have *really* met in person once, when she recently came to see me in the salon.

Weaselmomma has been getting tired of me whining about my angry grocery store experiences: mainly the day when my meat got touched, but also my shopping trip last week, when some random jerk thought it was totally acceptable to make a comment about how full my cart was. Weaselmomma suggested that, rather than going ahead with my own idea on solving my grocery store rage issues, I should just go shopping at her store. The way she talked about her grocery store, you would think it was all rainbows and butterflies, and maybe singing children skipping through the aisles.

But I like those things. So I told her that we’d plan a day.

Friday was that day. But we had to make a special stop before we could hit the grocery store.

The Outlet Mall is just about halfway between my house and Weaselmomma, so we met there to shop for tiaras, of course. With her birthday being the following day, she was in need of a new one. I know, I know, you might remember from the salon post that I mentioned that she has a drawer full of tiaras already. If you have to ask why she needs another one, you may not really understand the tiara-wearing philosophy. (ha ha) We spent a few minutes trying tiaras on like total dorks, and we took cell phone photos, only one of which turned out well. Of course it’s not a photo of me. Here’s Her Highness, doing the Royal Wave. Note that I made her pose for the photo *with* the backing card still firmly attached to the tiara. (I actually had my actual camera in my purse, but felt weird about using it inside Claire’s since the store was 1) small and 2) full of employees and no other customers, so I didn’t use the real camera until later.) 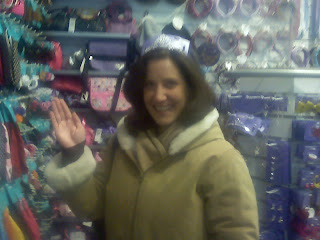 I found a great butterfly tiara that I dubbed “The Mariah Carey Tiara”, but alas, I couldn’t justify the expense. Although we were at an outlet, the tiaras were NOT on sale. Ugh.

And then, just when Weaselmomma and I were turning away from the display, I saw it. On the clearance rack. A tiara: marked down to $7.50. And guess what? Not only did it take Weaselmomma’s breath away when I put it on, but all redlines were an additional half off! I am happy to announce that Melissa’s (Hope Floats) recent tweet was right on the money. Click this.

On our way out to the parking lot, she was telling me that Mr. Weasel was going to meet us at the grocery store with his video camera.

I’m just going to let you absorb how creepy that could potentially sound for a moment.
/

Ready for me to continue? Okay.

She had big plans for a video post of us shopping together (for a post, of course). We got in separate cars to go to the grocery store, and as I was driving I called Melissa, mainly to check on her after her medical ordeal of the morning, but also to tell her that Mr. Weasel was intending to bring his video camera, and if nobody ever heard from me again after the grocery trip, she should point the authorities in the Weasels’ direction. Melissa was laughing her head off. I’m still not sure if I was *that* entertaining or if it was the drugs, not yet worn off. 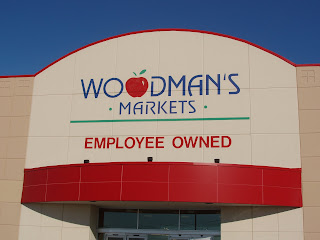 As luck would have it, Unfortunately, Mr. Weasel called when we arrived at the store and said that someone left the camera on and it only had six minutes of charge, so he would wait a while before coming over, to give it more time to charge up. And then, after a while, we heard from him again: he couldn’t find the car keys. So there would be no video and Weaselmomma would have to come up with another creative way to blog about our visit.

Weaselmomma and I first hit the liquor department at Woodman’s Grocery Store. First of all, I was already impressed with Woodman’s, just in the liquor department alone. It was huge, well-organized, and clean. As we walked along with the cart, we discovered that there seems to be a major gap in our liquor preferences when you put them side-by-side. I’m not a huge drinker and I have just a few choice beverages that I really, really enjoy and therefore stick with. You know, simple pleasures.

I became giddy when I saw these: 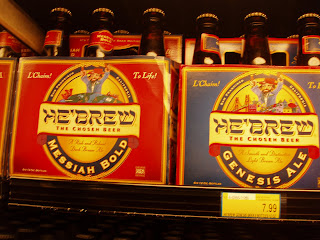 Her comment was priceless: “You mean you people have your own???” Now THAT was funny. I knew this brand was out there somewhere because Julesie bought Jim a branded baseball cap last year, I think, but we had never purchased any. Into the cart it went!

After perusing the wine aisles for her upcoming video post on wines for the holidays, we started looking at the bottles–really looking at them–for their interesting labels. We’re apparently liquor geeks. 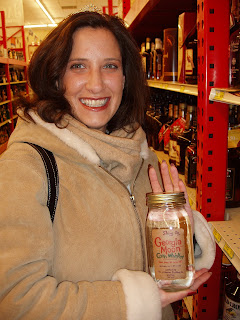 After standing in line with a bunch of other people, including women who wondered where the tiaras were being handed out, we paid for our cart contents (a list of which I will not post) and headed to the grocery section of the store.

Naturally the hilarity continued in the grocery store. People kept staring at Weaselmomma too: it was crazy. They couldn’t take her eyes off of her. They were probably jealous of her headwear.

I will tell you something helpful: if, once you became an adult, you’ve never actually been brave enough to wear a tiara out in public (and bachelorette parties do not count) you should know that after the first, oh, say fifteen minutes, you adjust to the feeling of it and eventually forget it’s even on your head. People were being extra-special nice to us and I remembered minutes later (after the niceties left me wondering why everyone was gushy-sweet) that we were wearing tiaras.

I have to say, Weaselmomma was right about her grocery store. I love it. I asked her how much she spends on groceries per month, and it turns out that, by shopping at that store, she spends the same amount for a family of seven as I do at my cranky-a$$ed store on a family of four. It doesn’t take a genius to do the math: I’m doing my big shopping trips over there! Of course, it’s not as close as my own stores if I just need milk or bread or something, but for the full-cart trips, I’m so there. And, I might add, there were no snarky comments by any patrons, there was no meat-touching, and there was no self-checkout. In fact, I chose to have them bring my groceries out to the curb and load them for me at no extra cost, and it made for a thrilling end to the trip! 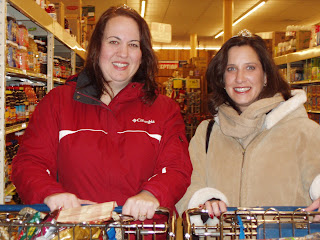 I commented to Weaselmomma as we walked side-by-side through the store, totally blocking the aisles for anyone who wanted to get by, “Oh my gosh, you have totally changed my life today.”

Do you know what she said? Of course it cracked me up:

“Yes, I’ve done that for lots of people.”

All in all, a fabulous visit with Weaselmomma. The only potential problem I can see in our relationship so far (other than that video camera-totin’ Mr. Weasel: LOL) is that both of us are talkers. Neither one of us shut up. Ever. The whole time. On future outings, I’m going to bring a Talking Stone or some similar object, so we don’t have to constantly interrupt the other with all of the important things we each have to say. Maybe a Talking Tiara?

For Weaselmomma’s take on our day, visit World of Weasels!

Previous post: Who Knew An Empty Bag Could Contain So Much Bad Ju-Ju??