In this, the last of eight crazy posts, I have a few reflections on and memories of Hanukkah 2008 that I’d like to share.

Last Sunday: First night of Hanukkah. Awesome night; had to dust off the cellphone rules (and adjust them a bit) because the thirteen-year-old was getting a cellphone for Hanukkah! If you did not read my first post in March about cellphone rules for your kid, it’s a must-read. Click here!

It was quite exciting and I took video, but because we used the actual video camera (instead of the “video feature” on my regular digital camera), it can only be burned to DVD and not uploaded to Youtube unless I purchase conversion software, which at this moment I will not do. You’ll have to use your imagination, and you can thank the sixteen-year-old for the actual still photos, because he was like a member of Britney Spears’ own posse of paparazzi when his brother opened the phone. 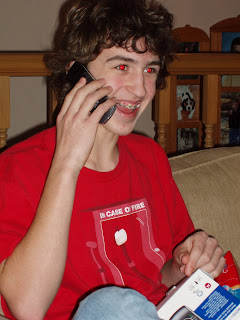 Jim, the sixteen-year-old and I made our own ringtone and installed it on the new phone. Basically we were all talking at once, saying things like, “Answer your phone!” “Your phone’s ringing!” “You finally have a phone and you’re not even answering it!” and my favorite…the sixteen-year-old saying, “Ah! Ring it!” (I think he got carried away and went berserk for a minute…)

At the designated time, I was fiddling around with the video camera (but it was on), and Julesie called the boy’s new number so the phone rang with our special ringtone, while it was still wrapped on on the boy’s lap. Good times followed. And don’t you pay any mind to those red eyes in the photos. I’m too lazy to fix them this morning. 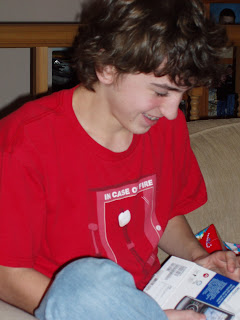 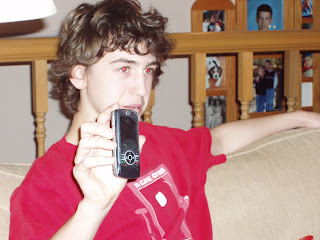 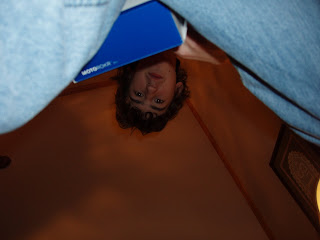 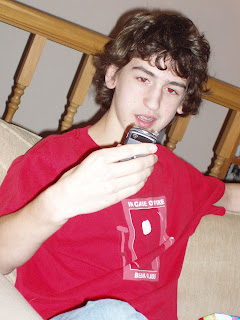 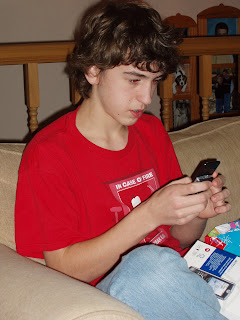 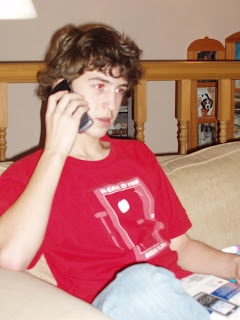 The reading of the rules… 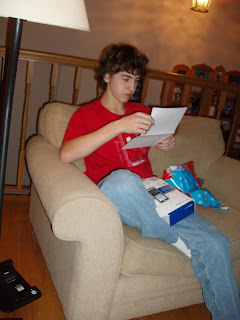 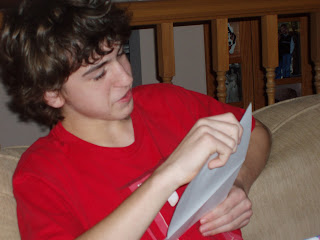 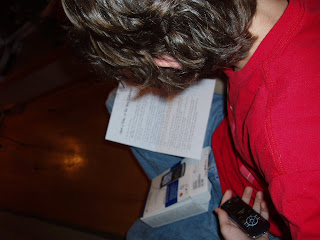 So it was a great night, until Julesie left. Before you say, “Awwwww….that’s so sweet!”, you should know that although we are all indeed devastated when our Fab Five evenings end, this one was particularly sad because five minutes after she left our driveway, she called me and said she had been in a car accident before even getting out of our subdivision. To make a long story short, it was icy (remember, it’s winter?) and this jerk that was driving *in front of her*, in the same direction, turned right but then flipped around to make a u-turn, not taking note that Julesie was behind him, and slamming right into her. She was fine, her car was not (but could have been WAY worse), and the whole episode caused me to send this tweet. Julesie has spent the better part of this week working on the police report and an accident diagram like nobody has ever seen before: it’s quite impressive and we’re hoping that the guy who ran into her isn’t a total jacka$$ and will admit fault. Keep your fingers crossed.

Tuesday: Upon leaving for work, I left a note for the boys that, if they wanted to, they could make the Peanut Butter Hershey Kiss Cookie recipe. The younger one, who loves to cook, actually did it. I got home and discovered that he made the balls slightly on the large side. Slightly. As in, the entire recipe only made fourteen cookies. 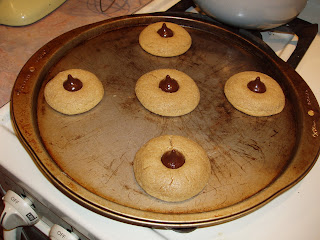 But they tasted good, so who cares, right?

Wednesday: I taught two classes in the morning and we spent the late afternoon (and into dinnertime!) playing Risk. As you may remember from a post earlier this year, we have a Risk “routine”. Can’t help it. Read up on it here if you want.

As you can see, as the red armies, I am firmly ensconced in Europe, where I always wanna be. If you’ll check out Mexico, you can see the dilemma the thirteen-year-old got himself into. 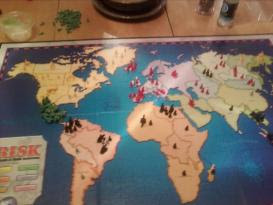 Need a closer look? (That’s right, ALL of his armies are on one country.) 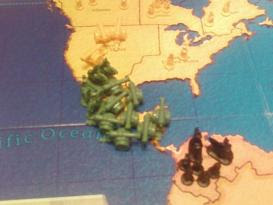 For the last hour of the game it was basically the boys fighting over North America and Jim and I fighting over Europe (how dare he!!!!). Something amazing happened. The younger boy went from having everything on one country to conquering the older boy in North America and making the older boy the first one “out”, which–in our family–is how the game ends. Otherwise we’d play all night.

Thursday: Christmas. But not for us. We slept in until about 9:30, when the phone rang. SO ANNOYING. Don’t people know that my Jewish family likes to sleep in on Christmas??? Anyway, it was a nice, relaxing day. We went to see “Four Christmases”, oddly enough, starring Reese Witherspoon and Vince Vaughn. We loved it. If you’ve seen the trailer, you’re familiar with the scene where the baby spits up on Reese (fast forward to 2:08 if you’re impatient)…

…as we were watching, we knew that was coming. We were waiting for it, expecting it to happen…and then when it happened, the timing of it was edited *just so*, so the entire audience screamed. Jim literally jumped out of his seat, flinging his arms up in the air, sending the lid to our Cherry Coke flying who-knows-where. It was the funniest moment, I ended up crying from laughing so hard and missed about the next two or three minutes of the movie because I couldn’t breathe OR see.

Friday: I can tell you what I did *not* do: go to the mall. After I taught my class, I ran a couple of errands and then came home. We basically just hung out doing nothing all day. Nice for a change! (Well, not a change from this week, but you get my drift.)

Saturday: Ah yes. Saturday. When we built the ark. Remember how I wrote about last Sunday being all wintery and icy and all? Temperatures were in the 20’s and low 30’s all week, until yesterday when we hit 62. SIXTY-TWO.

Do you know what that does in a wintery, icy area? Quick thaw. Floods. Ugliness.

Our backyard is graded “wrong” on one side. Every now and then with heavy rains we’ll get a little pond back there, but not a big deal. Yesterday with the combination of a quick thaw after having about eight to ten inches of snow on the ground and day-long rain, the yard looked like this by 1:00 p.m.: 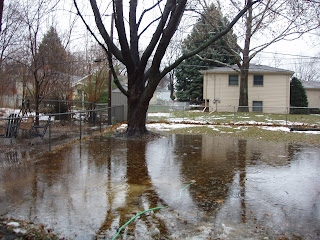 We live in a split level and the basement and sump pump are on the other side of the house. This end of the house is where our family room is. It’s on a concrete slab, has been mudjacked before (after our major foundation repair a couple of years ago, you know, when we had to LIFT that side of the house by a couple of inches! But that’s another story for another day!), and the water level was getting worrisome.

Jim started to pace when the water started making its way into our screened-in porch. With the rain not showing any signs of stopping, it was becoming more and more likely that our family room would get water. We had to try to think of something we could do to get that water out of the yard! Once you leave the backyard, the land slopes down toward the street, so we just had to get it flowing somehow.

Jim’s idea? To grab one of the garden hoses, set up one end in the deep water (8 inches deep, by the way!), take the other end towards the front yard, and suck on it, hopefully causing the water to come through it like a siphon.

All I could think of was digging a trench for a couple of yards, to give the water somewhere to go in its journey out of the backyard and into the front. (I’d much rather deal with replacing dirt and grass in a dug-out trench than replacing my carpet!!) I thought it was a stupid idea at first, but Jim disagreed and thought we should give it a shot.

So we did both. I worked on digging while he got the hose. 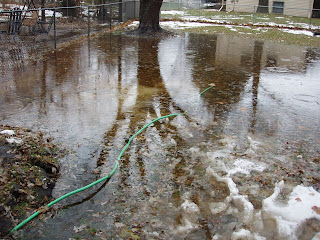 His siphon idea didn’t work, so he helped me with the trench. It was amazing to see the water leaving the area. It was slow and would probably take hours to drain, but we saw the water in the porch recede within a short while. 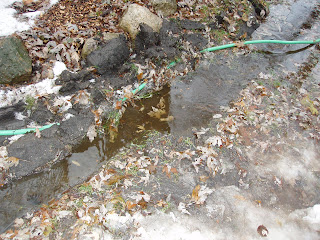 But wait! Ten minutes after I dug the trench, and the water was flowing through the hose! Are you kidding me??? How awesome is that?? 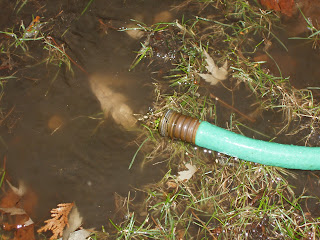 Look at that water flow! Yippee! NO WATER IN OUR HOUSE!!!! And THAT, my friends, was OUR miracle of Hanukkah… 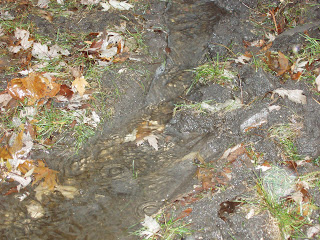 I even took a short video. He thought it was funny that I did that, but I thought that this was totally blog-worthy. Totally. (By the way, do you think the National Guard needs two more people who can save a house in an emergency situation? LOL)

The flooding was pretty bad in the area, so we had to postpone our Hanukkah celebration with Julesie at the House of Julesie because we have to cross a river to get there, and we were worried we’d get stuck over there.

So later today, we’re headed over to my sister’s place to do the last of the gifts. She’s making dinner and I can tell you that, because she’s got mad skillz, it will be totally amazing. I don’t know what she’s making, but I will rave about it later, you can be sure of that.

I was thinking that although the flooding caused us to postpone our get-together by a day, it’s nice to spend time as the Fab Five on the first AND last nights of Hanukkah. I like bookends.

Next post: It’s Been Quite a Journey So Far, My Love!