The Sharing Fairy Only Works Part-time At Our House.

Jim and the boys, especially the younger one, have this “thing” about certain favorite foods and Whose Food It Really Is.

For example, if I purchase Honey Mustard Pretzels or Flamin’ Hot Cheetos, whoever finds them in the grocery bag first will declare “These are mine. Stay away.” And then a race of sorts will ensue, to see who actually gets to eat most of them and–the horror!–finish the bag first. (Not necessarily in one sitting.)

Recently, war broke out in the kitchen. I purchase sugar cereals very, very rarely, for a couple of reasons, the first being that Jim and I would totally inhale the entire box before it made its way to the pantry sugar cereals are really unhealthy. These cereals are also a total rip off where price is concerned. Lastly, we finally weaned our kids off of Pop Tarts and Toaster Strudels a couple of years ago and they are actually making better choices for breakfast: we don’t want to mess with that!

All of those awesome reasons for not buying sugar cereals went right out the window when Jim and I strolled through Target on a recent date. (I know, romantic! LOL) We were in the grocery side of the store when, lo and behold, we noticed the end cap display FULL of Boo Berry and Franken Berry, which only happened to be our childhood favorites. Better yet, they were on Clearance! We approached the display and, much to our dismay, discovered that Target’s clearance pricing was only 20 cents lower than the original*. It was still pretty cheap (and the boxes were the small size), so we–just for fun–bought two boxes of each.

That afternoon when the kids arrived home from school, Jim threw down the order: “MY cereal. Don’t touch!”

The thirteen-year-old had a problem with that, and declared all-out Sharpie War. 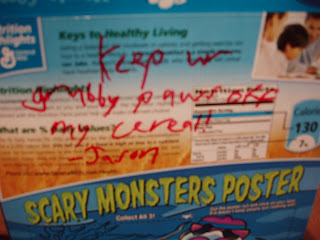 Translation: “Keep your grubby paws off my cereal!” 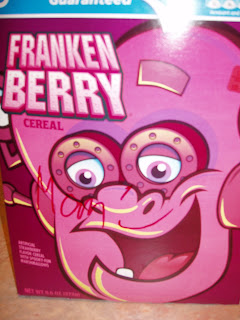 “Mom’s” (I TOTALLY did not instruct him to write that. Okay, maybe I did.) 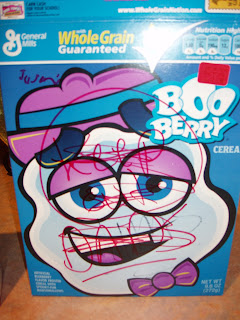 At first it said, “Keep Out: Dad’s!” but the younger boy scribbled that out and wrote his name on it instead… 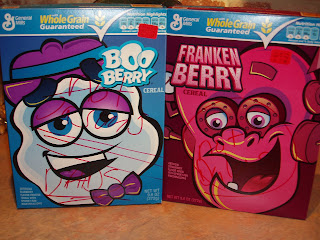 Then it was a whole mess of people writing their names on the boxes and someone else writing “NOT” above the names.

Count Chocula would NOT be happy about this; I’m certain of it!

*And by the way, I would like for someone to start some legislation making it illegal to declare that something is “On Clearance” unless there is a permanent markdown equal to or greater than 25% of the original price. Do you hear me, Target?