Have Your People E-mail My People; We’ll Do Lunch!

“Turning on a dime” is not something I’m normally known for. I like my routine, and although I can indeed change course if something comes up, I don’t usually enjoy making a change; I usually avoid it if at all possible.

Unless it’s an emergency or something that just sounds like an opportunity I can’t pass up. Like today.

I had planned to spend the day catching up with housework and other boring (but comforting and satisfying!) activities around here since I didn’t lift a finger yesterday. I taught class this morning (and for those of you who read my tweets last night, I totally did not even have a hangover. I can’t believe it!) with no problem, ran an errand or two, and then came home to walk the dog. Just like every Friday.

I checked my e-mail first, though, and found a little note from Manic Mommy, who I have stalked many times. Like this time. Or this time. Or, my favorite, this time.

Any chance you can get away for lunch at Woodfield’s Cheesecake Factory today? Dawn Meehan (Because I Said So) and some other bloggers (I think you know Honest and Truly‘s Michelle? — the two of them met up in Disney — are meeting, along with two others we know.*

How fun! Michelle would be the only person I was familiar with, from our mutual blog reading, and I was so excited to meet her. The idea of a spontaneous lunch sounded awesome. I called Manic immediately because she sent the e-mail at about 9:30 and it was now 10:50. She answered from the shower. (!!??!!) (I know, right?)

“I’m in the shower! I figured it was you or my son’s school!”

She cracks me up.

Lunch was at about 11:30 and I told her that I wanted to ride together but I still had to shower, so we decided to meet there. She said, “Call me from the car!”

Then I had a great idea. I shot off an e-mail to Melissa, my internet sista, as well as Snarky Sarah to see if they could drop everything and come to the Cheesecake Factory. I also texted Melissa, since I had her cell number in my phone from our last two failed meetings.

After that, I took the fastest shower on earth and then called Manic to check in.

I said, “You’re kidding me, right? I have already showered AND dried my hair. All I have to do is put my makeup on and I’m out of here! How much longer will you be? Maybe I can make it to your house.”

She said she’d be out in five minutes, and she’s a good fifteen from my house, so we stuck with the “I’ll meet you there” plan.

When I got on the highway, I called Jim to let him know of my whereabouts. He is totally against me meeting people I’ve “met” online by myself (sweet, and smart, right?), so I let him know that I would be with Manic and all would be good.

Then I called Manic, who was STILL AT HOME. I accused her of being High Maintenance, but she said that somebody kept calling her, causing the delay. I have no idea who this “somebody” is, but man, they were annoying.

While I was talking to her, a text came through from Melissa. She had an appointment at noon. I decided to call her to see where it was at. When she picked up her phone, I said, “Melissa?”

“OHHHHHH! With the nice phone voice?”

I forgot that she and I had never, ever spoken. Making the first phone call while trying to throw together a sudden meeting is sort of a weird thing. (Sorry, Melissa!) But it was so nice to finally hear her voice.

As it turned out, her appointment was minutes away from the restaurant! (Even more odd because she lives 40 minutes from this area) I told her to call me when she got finished and maybe she could swing by before going home to meet her daughter’s school bus.

In the meantime, Manic and I arrived at the restaurant and I met some really nice ladies. I met Dawn, whose book “Because I Said So!” (like her blog) is being published as we speak. I met Shawna Coronado, author of the just-published book “Gardening Nude”, which is totally not what you think. I met another lovely woman, a college friend of Manic’s and Manic will kill me but I can’t remember her name. And shortly after we were seated, Michelle arrived. It was a really fun lunch. 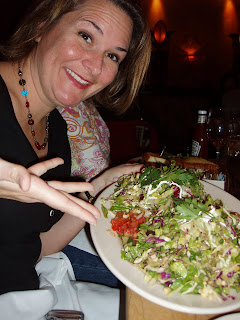 Manic ordered a salad, and it was the biggest salad I’ve ever seen, for one person. It was way bigger than it looks in this photo: you really had to see it in person to get the idea. 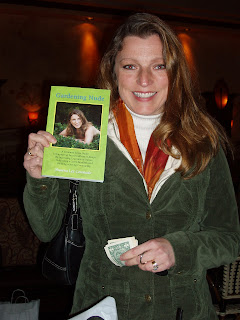 Shawna and her book.

About halfway through, Melissa called me and said, “I’ll be there soon, and Sarah is coming too!”

And soon, they arrived. Shawna and Manic’s friend had to leave right before that, so there was plenty of room at the table. I FINALLY got to present Melissa with the tiara I bought for her several months ago, so that was exciting. 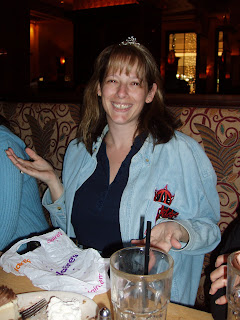 Tiara-wearing Blogger/Sister!
(She’s still wearing it now, she tells me!) Sarah and Melissa (and all of us, really) had to leave about 20 minutes after they got there so they didn’t order anything. 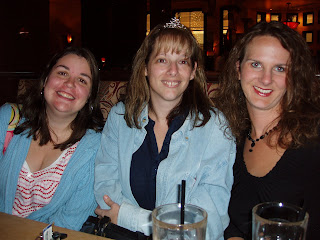 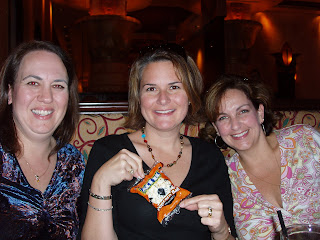 Me, Manic, and Dawn

What a great surprise plan for today! I’m looking forward to the next blogger lunch, whenever the heck that will be!

*I totally edited Manic’s e-mail for punctuation and capitalization since she didn’t know when she sent it that it was going public. Not that she is a poor writer; on the contrary, she’s an excellent writer. However, she was in a hurry and had to start her shower so she just typed it quickly. Catch Manic’s material on her blog and at Betty Confidential!

Next post: Alright, Alright…Birthdays Aren’t THAT Bad, Especially When They Last A Week.

Previous post: Next, Maybe A Voice-over Role In the Next Pixar Feature?