Today marks the birthday of one of my oldest and dearest friends, Dawn. You know her as “Anonymous.” (Helleeew? I may get her a Blogger account for her b-day!)

I became acquainted with Dawn way back in the olden days when I was in high school. We were pen pals for more than a year before we ever met in person. Her boyfriend Scott was going through Navy Boot Camp with Jim, and the two guys thought it’d be nice for us to connect. (Great idea!)

Dawn and I were able to bond over being the girlfriends of Navy guys. When I was a Senior in high school, she was a freshman in college. Over that next year, I enjoyed reading her letters and learning about her college experiences, living in a house with a bunch of other girls and doing things like getting slightly buzzed before going to see my absolute favorite band (Berlin) with her roomies.

After their wedding (eight days before ours), Dawn moved to Virginia to be with Scott; he and Jim were both stationed there. I went back to the college dorm for one quarter before moving down there as well. Dawn and I became fast friends. They lived in Virginia Beach and we lived in Norfolk, but we saw each other often. Jim and Scott were on different ships but in the same battlegroup, so they were often gone at the same time, sometimes for months at a time. It was great to have someone close by to spend time with; we stayed up late together, spontaneously ballet dancing across the living room in the wee hours and just being giggly. One of our favorite memories is the night that we decided to make margaritas and then realized that I didn’t have a blender, so we put everything into the Cuisinart. Helpful Hint: you cannot make a frozen, slushy margarita in a Cuisinart. The ice just swishes around in there, sounding like the clackety-clack of a train. My advice? Get a blender. I did! (eventually)

I learned about Standing By Your Man (sort of) by accident one night over at Dawn’s house. The four of us were playing a game of Monopoly, and I went out first. I “accidentally” started rooting for Dawn to win, instead of rooting for my husband. Not really just rooting, though. It was more like cheering. Loudly. And obnoxiously. Something like, “Go Girls Go! (clap) Go Girls Go! (clap)” At that time, Jim was a very competitive person and I got the silent treatment all the way home. (Thank God he’s learned over the years that there are more important things than winning a board game) These days we play Monopoly only occasionally; we instead prefer Spades. Dawn and I love when we are partners and can kick the boys’ a$$es. We always have a “strategy”. What is it? I have no idea. But we claim to have it. 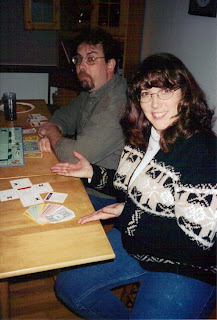 This was not THAT Monopoly game. This one (a few years ago) has another story. A story of Greed and Non-compromise. And another competitive man. (Not Jim. Need a hint? Look behind Dawn.)

Eventually Scott and Dawn moved into our neighborhood, which was awesome. We were both enrolled in college at Old Dominion University (both in the Elementary Education program) and carpooled there daily. We even took turns making lunch, to split the work. One morning my phone rang super-early. I answered. “Hello?”

It was Dawn, completely over-her-skis hysterical.

“THERE IS WATER ALL OVER MY BATHROOM! WHAT DO I DO??????” (not her exact words necessarily, but you get the gist.)

She started yelling at me through the phone line again. Something about water, her bathroom, and her dog, Rex.

“Uh, call the water company?” (Sue me. I got married young. Didn’t have all the answers.)

After a couple more minutes of barely understandable jibber-jabber, Dawn and I got off the phone and she called the maintenance man for the subdivision, who happened to live across the street from her. She was unable to go to school that day. (Damn. And it was her day to make lunch. ha ha)

What had happened was, Rex, a dog with character, chewed off the little knob that controls the water flow from the pipes into the back of the toilet, basically causing a gusher, pushing Dawn over the edge of her own sanity, confusing the hell out of me, and making a story that we still laugh–hard–about twenty years after the fact. Sometimes I even imitate her on that call. Good times.

My one regret in the whole twenty-three years I’ve known Dawn (OH GOD, DAWN: I’M HYPERVENTILATING!!!!!!!!!!!! Twenty three years??? Is that even possible?) is that when she discovered she was pregnant with her amazing (and now almost 18-year-old!) son Nick, I reacted badly. Immaturely. I was supposed to be the one person outside of family who should have been happiest for her, and instead I made some comments that I shouldn’t have. I reacted out of fear: I was worried that our friendship would change and she wouldn’t have room for me anymore. I was wrong. I apologized to her at that time and she graciously forgave me. In fact, this woman had a terribly long and difficult labor, and when giving birth she still thought to call me in between contractions from her hospital bed to wish me a happy birthday. (Can you believe that?) 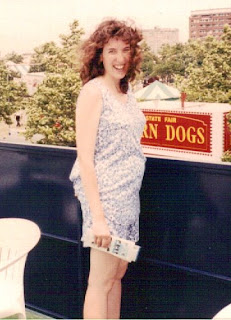 Nicholas was born on the day after my birthday and though I was right that our friendship would change, it definitely changed in lovely ways that I couldn’t have predicted. 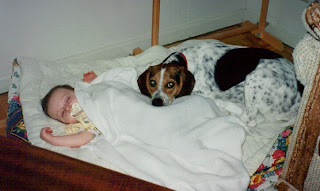 My late, great beagle Bijoux loved Nicholas from the beginning.

I learned alot from Dawn when she was a new mom, and being around Nicholas so much when he was a baby was wonderful.

Another great time we had was when Bijoux turned one, I threw her a small party. It was just me, Dawn, Nick, and Rex, but we had a great time. 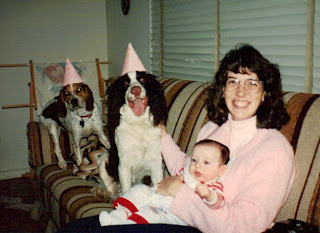 Read the details on my other blog, here.

The following year, Jim got stationed up at Great Lakes Naval Base and Scott eventually followed. We all lived in Kenosha, Wisconsin at the same time for a couple of years but since the mid-90’s we have lived in different towns. Our friendship is always there, though! We know that even though we don’t talk often, the other one is there whenever needed. And that’s a great feeling.

Another fabulous thing? Our kids like each other very much, and they can always pick up where they left off on the last visit too! 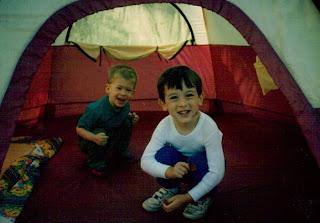 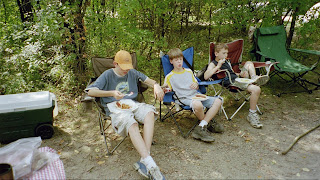 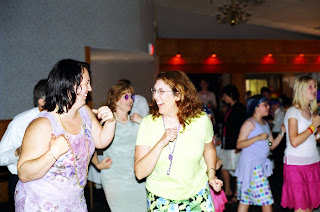 Nobody has more fun doing the chicken dance than Dawn and me. At the older boy’s Bar Mitzvah, July 2005. 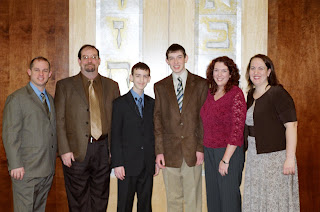 Why didn’t we get the older boy in this photo? What was I thinking? Geez. At the younger boy’s Bar Mitzvah, February 2008.

*Dawn and I used to do the “Sweatin’ to the Oldies” tapes together.

*We can always offer the perfect cheer, and did just that at the AC/DC concert when the four of us went there 8 years ago. We were the only two women who weren’t ready to expose our bosoms to the cameras (probably), and we were busy clapping and cheering, high school style.

*She makes a killer taco dip.

*We saw “When Harry Met Sally” in the theater together and, during a quiet scene, Dawn pulled open a jumbo bag of M&Ms, sending them all loudly scattering on the floor. Oops!

*Our families have spent many a New Year’s Eve together, all very outstanding and fun except for one that will remain the worst New Year’s Eve ever for both Dawn and me. Long story, not blog appropriate. The good news is that New Year’s Eve only got better after that year!

*We have also spent many July 4th’s together. The last time we did, Dawn, Jim and I had an intense session of talking Scott out of shooting off some highly dangerous fireworks from their deck, for fear that he would set the house on fire and/or blow his arms off. (Poor guy, he loves his fireworks. It was adorable and scary at the same time!)

*We have lived 90 minutes apart for the last bunch of years, and even after all these years of friendship and reminiscing about the same goofy memories, every time we get together it’s like we just had lunch the day before. She’s my silly, goofy, wonderful friend and I am blessed to know her. 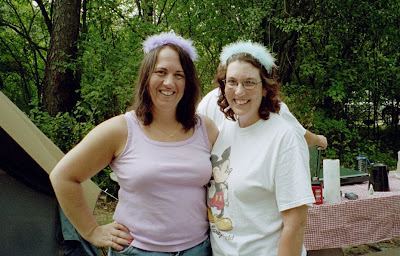 Happy Birthday, my Friend! You go put that tiara on! Love ya!