So, my parents are on their way back home to Tennessee. It was a nice Thanksgiving weekend, though a little crazed with two extras in the house 24/7. I tend to walk around sort of wondering “Who moved my cheese?” because I’m such a creature of habit, and holiday weekends definitely throw a wrench into my cherished routine. We had a great visit, though. More about Thanksgiving dinner later, but I wanted to show you what my mom and I did on Thanksgiving morning.

We baked. Yummy. First, we made a bunch of pumpkin bread and chocolate chip banana bread, and a pumpkin pie. 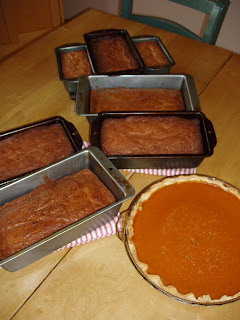 The chocolate chip banana bread recipe is amazing, but it’s a closely-guarded family secret; I’d post it but then I’d have to go on a mad killing rampage in order to protect myself from the wrath of my mother. The pumpkin bread is also totally awesome; it actually came from my kindergarten class somehow; my mom and I have been making it ever since. Here is the recipe. (This is the copy of it that I wrote out for my Grandma way back in the day) 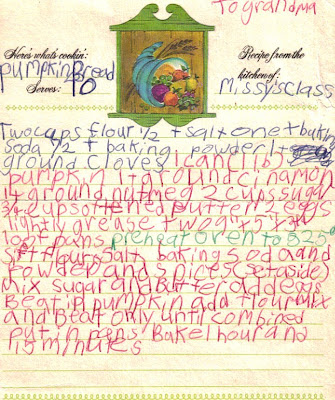 I also tried a new cheesecake recipe. I make cheesecake more often than most; we love it in this house. It’s easier to make than most people think. This time, instead of my old stand-by recipes, I tried the recipe for Junior’s Cheesecake (yum!) out of the New York Cookbook by Molly O’Neill. 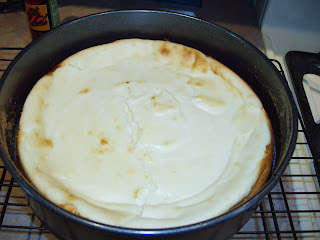 Good Lord, that was some amazing cheesecake. We took it to the home of an elderly friend of the family on Friday, and her daughter-in-law, who has lived in Manhattan for thirty years, told me that it tasted identical to an authentic Junior’s Cheesecake. That was a super-high compliment and so I can definitely say that the recipe is a winner. Yay! We all won!

We also made one more thing. It started out in this bag. Any guesses? 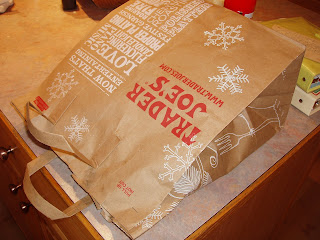 I don’t know what you guessed, but you were probably wrong (har har har!).

It was a Paper Bag Apple Pie. YUM. And it was gorgeous, too. See? 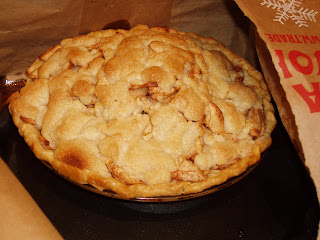 Want the recipe? Okay. Get a pencil. (or I guess just copy and paste! This is the 21st century, you know!)

Set up the pastry shell/pie crust in a pie pan. Pare, core, and slice the apples. You should end up with about 7 cups (or so, give or take). Put them in a large bowl.

Combine the sugar and flour for topping in a small bowl. Cut in the butter/margarine. sprinkle over apples to cover top. (You may have to press it into place)

Slide pie into a heavy brown paper bag, large enough to cover the pie. Loosely fold the open end over twice and fasten with paper clips or staples. Place on large cookie sheet for easy handling.

Bake at 425 degrees for one hour. Apples will be tender and the top will be bubbly and golden. Split the bag open and remove the pie. Cool on wire rack. Serve plain or with ice cream.

The taste? OOOOOH, good. My mom has made the pie with mixed berries, too. Try it out, and let me know what you think!

Hope you all had a great weekend! I’m off to try and catch up with some of you right now!

Next post: Now The Search Will Lead To Me Two Times