"Whatever, Martha!" Brings The Funny

I found a new favorite show today. I was watching Martha Stewart a couple of weeks ago and she promoted her daughter Alexis’ new show, “Whatever, Martha!” It looked interesting so I set the DVR to record it. (But not til last week, because I forgot all about it right after Martha went to commercial: that’s how I roll.) 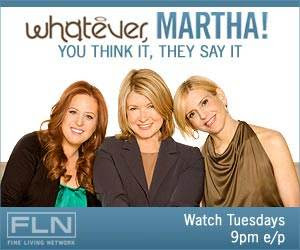 Two episodes recorded sometime in the last couple of days, and I sat down to watch them this afternoon when I got home from work.

Can I tell you that this show gave me the laughs I needed? My goodness, it is just hysterical. Am I the last person to find this show? I hope not. I hope I’m turning you all on to something new and that all of the comments aren’t “Duh Melisa, where have you been???” (Busy. Remember?)

Basically here’s the show in a nutshell. Alexis Stewart and her friend (and radio co-host on Sirius) sit in a living room-style set and watch old footage from Martha Stewart shows, and they totally rip on them. They make fun of the clips on all levels, and even venture into the gutter. I was laughing so hard during the first one I watched that both boys migrated to the couch…AND STAYED THERE THROUGH THE SECOND SHOW*.

What I love about it, besides how funny it is, is that I’m a fan of Martha Stewart and it is still freakin’ funny. I love that she executive produces this show; she can totally laugh at herself.

Here’s Martha, painting a porch. She loses them at about 3:15:

Is anyone else watching it? Try it out, especially if you need a good laugh!

*In talking about it over dinner, JIM even said he’d like to see it. But that’s because he can’t stand isn’t a fan of Martha and likes the idea of someone making fun of her.

Next post: If Only A Frosting-Covered Jeremy Piven Had Been Available, It Would Have Been A Perfect Evening.