We Were So Proud, Mary! (or something like that)

Ah yes, so where was I? Let’s all go back and get caught up. Click here.

We got ourselves situated in Row 17 after purchasing our souvenir keychains-someday-to-be-magnets for $7 each (t-shirts were between $40-65! Yikes! I think my days of buying concert t-shirts ended about 9 years ago with AC/DC, and I think I even paid $30 for that one.), but no drinks. We had just eaten dinner and decided that we could do without the drinks. (Julesie was probably over it anyway, since she had been in Key West over the past five days and had–ahem–a few while down there.) I was glad we made that decision, because even if I hit the bathroom immediately before a concert, I have to go again–like CRAZY–by song number 2. Julesie says it’s my excitement. Whatever it is, I knew that getting to the bathroom from row 17 on the floor would not be a fun time. Too much info? Sorry.

The seats were phenomenal. We chatted for a few minutes with a couple who was sitting in front of us, and when I wondered aloud if Oprah would be at this show like she had been when Tina played the United Center just a couple of days before, the woman emphatically said, “Oh, Oprah would NEVER come out to Rosemont.” It was funny how she said it, like she had been on the phone with Oprah or something, and they had chatted about the “crazy” idea of Oprah coming “all the way out” from her apartment on the Gold Coast to Rosemont, a suburb literally just outside city limits.

Anyway, we were marveling at our location in relation to the stage when, shortly before 8:00, we were subjected to four Amway commercials. We were like, “Are you KIDDING me? Amway?” Turns out they are the tour sponsor. Now, what I deduced was that Tina must use the product that was spotlighted in the first ad, which is called “Artistry Time Defiance Cosmetics”. First of all, as we would learn minutes later, she looks phenomenal: even UP CLOSE, as we saw with our own eyes (later, later!), and second of all, don’t you think that Ms. Tina Turner could have gotten any company in the world to sponsor her tour? Pepsi? Coke? Leggs? Whatever?

The concert was, of course, amazing. Tina was in great shape and absolutely every bit as entertaining as she was when we saw her in 1984. And those legs! Geez! And her moves! Yikes!

Her backup dancers were incredible as well. I found myself looking constantly at the one with long blond hair (sorry, other 3 dancers!), because of the way she was swinging her hair around and her facial expressions. I can’t remember her name; I want to say it’s “Ferdy something or other”. Just look at her! (She is probably thrilled that she’s the only one with long blond hair; hee hee! They were all four really something!) 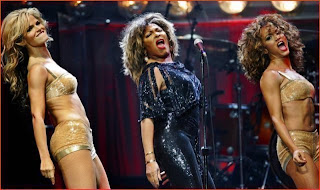 Tina performed one of my favorites, during which I sent out this Twitter tweet. Check it out here, and look at “Ferdy something or other” and her hair (BTW, not my video. Got it from youtube!):

For the record? I was totally wishing I was up there with her four “flowers”, as she called them. I could totally rock out to that routine. (Siobhan? What about you? Don’t you think it’d be fun???) The other thing? We were in awe of the fact that, at 68 years old, Tina could actually be the grandmother of her backup dancers. Crazy, right? That “grandmama” can move!

Of course no concert post would be complete without crappy cell phone photos. Here are a couple now! 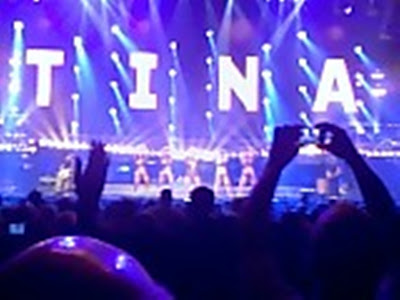 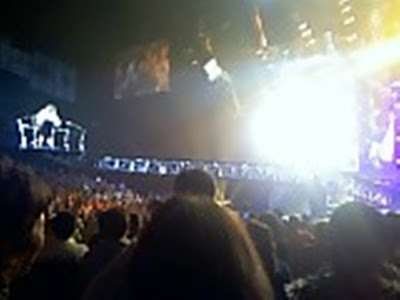 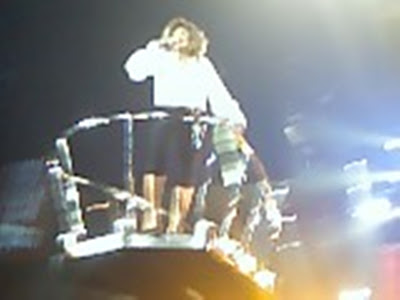 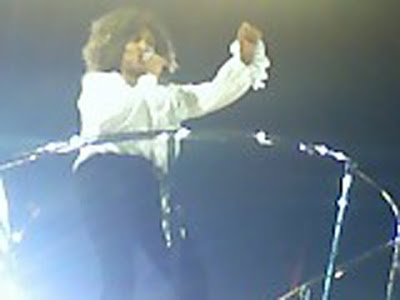 Okay, so the story on the bottom three is this. During “Nutbush City Limits”, she ran over to the right side of the stage and suddenly the front of the stage started moving her out into the audience on this big “arm”. It was CRAZY. You’ve got to see it. Click below and fast forward (if you want) to 2:18 (BTW, also not my video!).

When they stopped her as the arm was pointing straight away from the stage, at our show she was hanging over the people two rows in front of us. If I had super jumping powers I could have joined her up there! At one point (if you didn’t watch the whole thing you can find it at 7:25) she ran and danced back towards the mainstage on that thin arm with absolutely no rails on the sides or anything, and she was wearing those heels she’s famous for, and I almost had a heartattack I was so worried!

By the way, the costumes were absolutely unbelievable as well!

There was a guy seated a couple of rows ahead of us who was taking photos, and he was getting pics way better than I was. I didn’t get his permission to post any, but if you want to have a quick look-see, here’s the link to his photo album!

If you’re not sick of Tina by now, here’s her official Concert Tour promo video. The performance video is, of course, very good.

Such an exciting show! I would totally go and see her again. We had a great time, as usual!

As a P.S., you’re not going to believe this. I was complaining about my cell phone camera to the sixteen-year-old: “Geez, it’s a Motorola RAZR!! It should take better photos, I KNOW IT!”

His reply?
“You probably have it set on ‘thumbnail’, Mom.”

Yes, I’m an idiot. Never occurred to me to check my settings. I have now taken totally crappy photos of George Michael AND Tina, and I have no more concerts on my horizon.

Previous post: If Only A Frosting-Covered Jeremy Piven Had Been Available, It Would Have Been A Perfect Evening.