We Race Without Ever Leaving The Family Room.

It was a banner weekend for the Fab Five as we planned for the Season Premiere of one of our all-time favorite shows, The Amazing Race.

I was overjoyed to discover on Saturday that the Reality Channel was showing a weekend marathon of the Amazing Race All-star season, because we thoroughly enjoyed that one and seeing it again was a great warm-up for the new shows. As I started watching the marathon, I send Julesie a text: “Wanna come for dinner tomorrow night for the season premiere of the race?” She said yes, and asked if I had a theme in mind.

Um, no. Not this time. We had planned on having burgers, but nothing fancy. I asked her to bring dessert.

As I mulled dinner over in my head, I thought, “Why not make something special with the burgers?”

Really, I’m THAT out of control. Hang on. It gets better.

I started researching international burgers on the internets. I decided to make mini-burgers so we could try a few different things. After reading a bit about what those crazy (in a good way) folks Down Under do to their burgers, I sent an e-mail to my girl Katie in the Land of Oz:

Hey you!
I’m hoping you can shoot me a quick e-mail back and answer this question for me. I am preparing a special dinner for tomorrow night (you’ll read about it!), and I found some “rumors” around the internets that Aussies like to eat beetroot on their hamburgers.

1. Is that true?
2. Are there any other burger toppings that Aussies traditionally go for?
3. If you know, how would I prepare the beetroot?

While I went about my business, hoping to get an answer from her (it’s a 13-hour time difference, so when I e-mailed her she was still sleeping!), I checked my Facebook account, and lo and behold, my favorite Scot (and fellow George Michael backup singer/dancer) Siobhan was online. Great! I could ask her about Scottish burgers, if there was such a thing.

There’s not. No problem; just thought I’d give the Scots equal time if possible!

Jim and I decided to go ahead to the store and pick up some beets along with everything else; we could always send the sixteen-year-old out again if we didn’t have something that Katie told us to get.

What else did we need? I had to represent for Deutschland, yo, so I got mustard and sauerkraut for our German mini-burgers.

Italy was represented with provolone cheese and pesto.

Mexico was represented with salsa, pepper jack cheese, and avocado.

And of course, the good old USA was represented with cheese, lettuce, tomato, onion, catchup, mustard, and pickles.

At the store, I also decided to pick up some international beverages. My thought was that Julesie and Jim could do a “flight” of beer (I don’t like beer). I got a great assortment (click on the photo to enlarge if you can’t read what I typed): 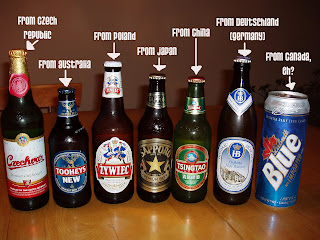 A couple of hours later, I received a reply–actually two in a row–from Down Under. Katie was seriously thrilled to help me with this vital information that ended up totally making our evening spectacular. The first e-mail:

BEETROOT! I can’t live without it. I don’t know if you can get in in cans over there – in England you cant, and it’s utterly horrendous fresh! – you need it pickled. Delicious!

Also, we ALWAYS put pineapple and a fried egg on a burger (or pizza) and a heap of tomato sauce (to be authentic, you have to refer to it as ‘dead horse’. Weird, no?)

Weird, yes, but in a GREAT way! Loved it! Jim and I assumed that (hopefully correctly) the tomato sauce Katie wrote about was more like our catchup and less like plain tomato sauce used to make chili or pasta sauce. (Katie, you’ll have to let me know on that one)

Her second e-mail came with two photos, and she added:

So for the line up…

with added tomato sauce (remember: dead horse!) and if you’ve got any, potato salad. Whack the patty on the barbie for added flavor, and you’ll have a massive hit!

First of all, have you Americans ever SEEN such an ingredient list for a burger? My family was definitely up for the challenge and we were all set. I happened to have everything else I needed (substituting turkey bacon for “real” bacon since we don’t eat pork), and dinner preparations could move ahead. Jim had made up the mini patties earlier, so I just had to cook them. And I’ll have you know that I totally whacked the crap out of those patties on the barbie, just so I could say that I did it Katie’s way.

Julesie came over and made a delicious potato salad to accompany the burgers. When she arrived, I presented everyone with their special homemade “Amazing Race” wing pins (complete with host Phil Keoghan’s picture), like the ones you get when you are a kid on an airplane:

When I gave the sixteen-year-old his, I figured his reaction could go either way. To my amazement, he looked at it and said “YESSSSSSSSSSSS!!! Awesome!”

And then, ugh: “Can I wear this to school tomorrow?”

“Good point.” (Shew. He’s successfully gotten through 2.2 years of high school without being made fun of for anything; I’d hate to be responsible for that record going down the tubes!)

I started setting up the table, complete with our airplane-style compartmentalized dinner plates, and it was quite a sight to see: 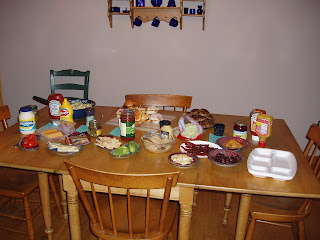 We all took our dinners to the family room and set up our tray tables: 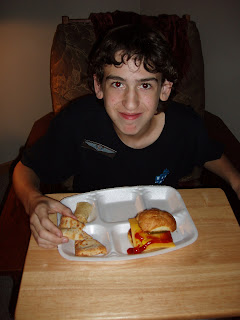 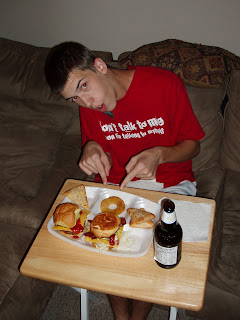 And boy, did we eat. Oh yeah, wanna see some burgers? Here’s my German mini-burger: 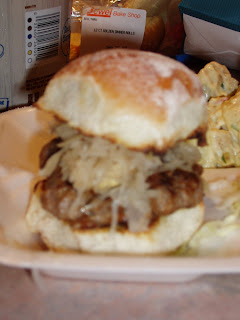 And the star of the evening, the Aussie mini-burger (it sure was tough to get all that stuff on a mini-burger, but I did it!): 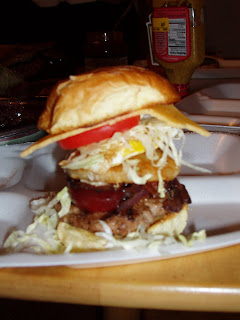 I have to say, all of the burgers were delicious. And that Aussie burger? Even for Americans who are famous for overdoing everything, that ingredient list was somewhat overwhelming and we weren’t sure if the taste would be something we’d like. But it got the thumbs-up from everybody, and in fact I plan on making them again soon (right after I get a cholesterol check)!

Oh, and the sixteen-year-old and his Amazing Race pin? I was pleasantly surprised to go into his room and find this: 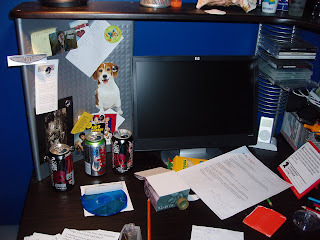 See it? No, not the three empty cans of soda, which he claims are from three different days. Look a little closer: 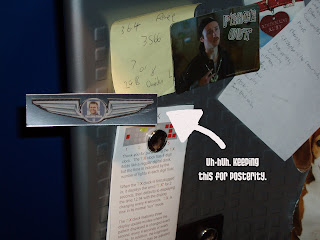 Seeing that pin up there with his important stuff gave me the warm fuzzies. But I didn’t mention it to him. I’ll keep it to myself. Oh, and between you and me!

Again, another Fun Fab Five evening. Many thanks to Katie, because her assistance really helped me to hit it out of the ballpark where dinner was concerned.

Oh, and the show itself? Loved it. There are some real characters in the race this season…can’t wait for next week!