It’s great to be home; though we had a wonderful weekend in Tennessee, coming home was one of my favorite parts! We had a great time and saw some gorgeous sights, and one really ugly one. Going to Tennessee for just three days is usually really hard because Jim’s parents AND my parents live there, and my good friend Kate (and her hubby and Bean) live there. We spend the entire time we’re there trying to make sure that we spend equal time with each set of parents, and squeeze a too-short visit with Kate and her family in there somewhere. It’s actually quite stressful because we are always trying to avoid offending somebody or the other. This time the weekend seemed more relaxed, though, which is great.

On Friday night we went to dinner to celebrate my dad’s birthday. On the way home, we stopped at a great ice cream place near my parents’ house (Bruster’s) to get an ice cream cake. I got out of the car to purchase the cake, knowing that my dad really likes the double chocolate chunk cake. As it turned out, the only one they had in that flavor had bright pink and blue decorations on it. It looked more like a cake for a punk baby shower but since it was the right flavor I had to get it. I asked the guy at the counter to write “Happy Birthday Grandpa” on it.

It was clear to me when I got the cake back that I forgot I was dealing with a teenaged boy who has no sense of style or color matching: he wrote it with RED icing. Ick? I know, I know, the colors of the cake didn’t matter when it came to the taste but boy was that cake UGLY! Need proof? 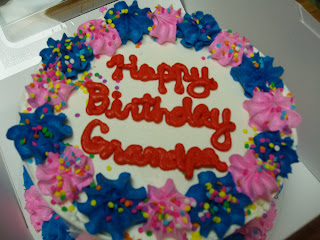 But he liked it anyway, and of course it DID taste delicious. 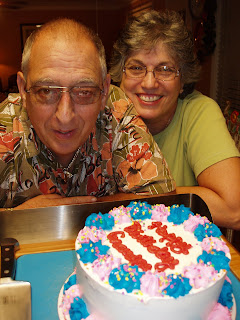 On Saturday we woke early to head over to Jim’s parents’ house and left shortly after we arrived for a day in the Smoky Mountains. We went to Cades Cove first, for breakfast. The boys were helping Grandpa start a fire so Grandma could cook breakfast and were absolutely horrified–as Boy Scouts–when Grandpa pulled out the bottle of lighter fluid. Check out their faces as they watch Grandpa haphazardly build a “fire.” 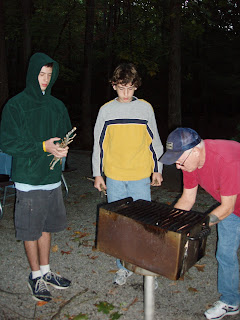 Grandma needed a second fire built, so when Grandpa went to collect pine cones, the boys hid the lighter fluid… 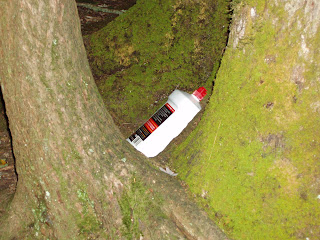 …and successfully built a Boy Scout-worthy fire without it. 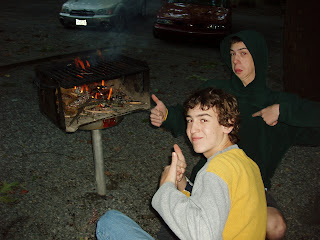 After a great breakfast, we decided to drive the 11-mile scenic loop around the Cove. The leaf colors are changing and the mountains look spectacular, even though the color “peak” isn’t supposed to be for another week yet. The boys took turns taking photos from the backseat. 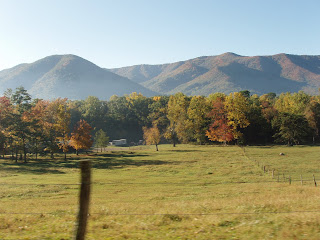 We got this lovely family photo at one stop. 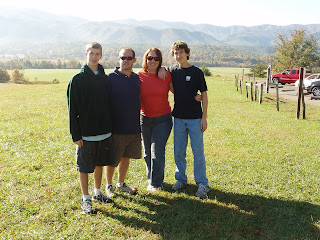 After a couple of hours of driving around and stopping off at a couple of historical buildings to check them out, we went to my absolute favorite place in the mountains, the Chimneys. 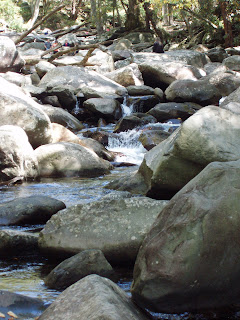 It’s a picnic area that is situated right on the river, and there are huge rocks to climb if you’re adventurous. The sound of the water rushing through the rocks is music to my ears, and can be heard here, until Jim accidentally messed up my little movie by telling me what time it is. 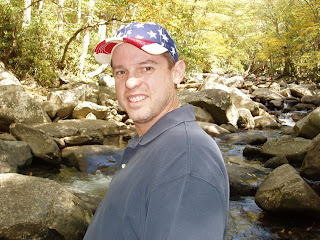 It was after seeing this photo that I decided to cut a couple inches off my hair next week. Ick. 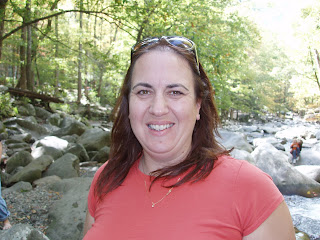 The boys enjoyed posing. Here is the older one with that goofy “macho man” pose that he likes so much: 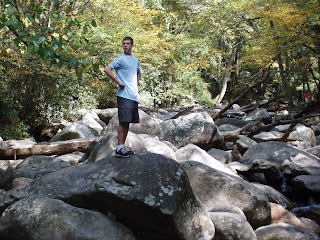 And the younger one? My thinker. 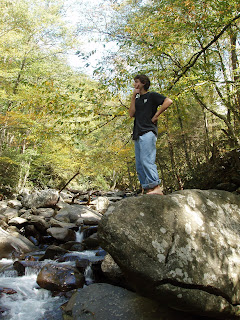 I think this will be our holiday card photo! 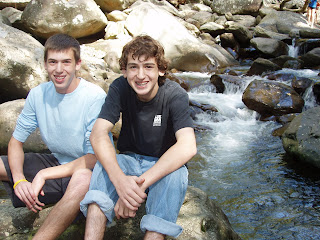 Oh. I forgot to mention something. On Saturday morning I put ZERO thought into my footwear. I totally forgot that I’d be walking up mountains and on rocks for most of the day. Look at this tragic choice of footwear, 2/$5 flipflops from Old Navy: 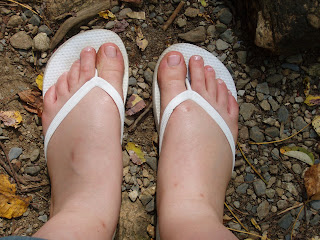 I ended up taking off the flip-flops for walking on the rocks, but that made the situation all the more hazardous because wet feet + rocks = major slippage. But I made it. After the Chimneys we headed up the mountain to Clingman’s Dome, the highest point in the Tennessee Smokies. On a clear day you can see seven states from there. The colors up there were beyond gorgeous. 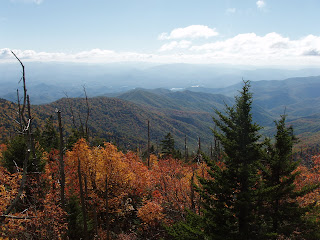 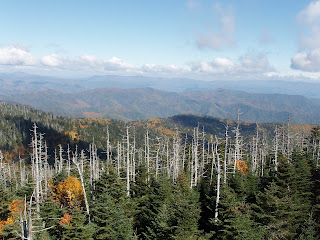 I had never been to Clingman’s Dome in all the years I lived in Knoxville, so this was going to be exciting for me. Well, not for my feet. But the rest of me was thrilled.

Until we got up to the parking lot. I thought once we got to the parking lot, we were there. But I was wrong. You see, from the parking lot there is a half mile hike practically straight up the mountain to get to the *real* top. I looked down at my feet and wondered how that was going to feel.

And then we set off walking on the steep incline, which was paved. You can’t see it very well in this photo; I was trying to show you how steep it is. Humor me and tell me that you can see how god-awful it is. 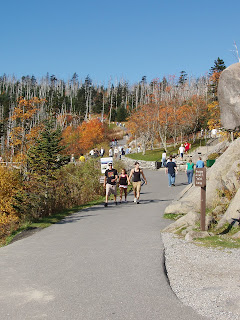 I was completely surprised and depressed that as we walked on, I was really sucking air. I have never felt so unfit in my life, even when I was unfit. We had to stop twice on the way up so I could catch my breath. (The good news is, when I was telling my boss about it at the health club today, she asked me how fast I recovered and when I told her that I only had to sit for about a minute before feeling ready to continue, she told me that it was more the altitude that was bothering me and not a lack of fitness. I love her.)

Once at the top we arrived at this pretty cool-looking concrete lookout tower, where the views were amazing. 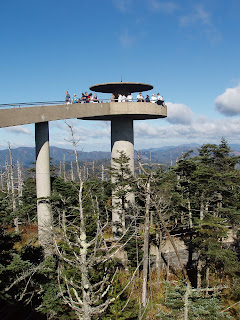 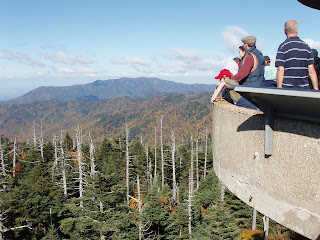 On the way down, I said “Screw the flip flops” and took them off, walking down the mountain barefoot. (Hillbilly here I come! Devilish Southern Belle: you don’t walk around mountains barefoot, do you?) 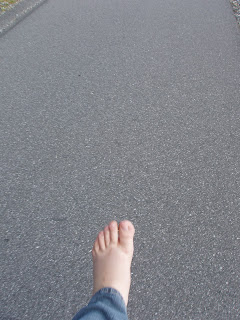 Took a few fabulous photos, and we were on our way home! What a great day! 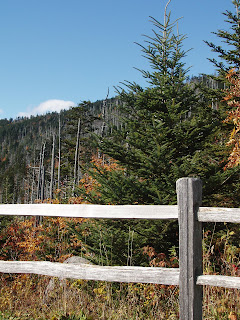 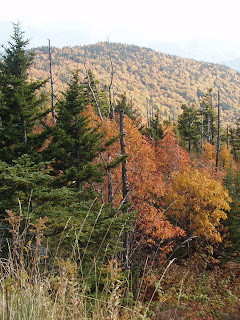 By the way, I took some footage of driving the curves of the mountains. You’ll have to turn the sound down, because I literally stuck my camera out the roof of Jim’s truck to film it.

And now? I’m home. And exhausted. And behind on everything. But I’ll catch up…I hope! Hope you enjoyed my little 3-hour tour!