I Was Surprised To Be Surprised

Thank God I actually journalled in the scrapbook I made to commemorate my 30th birthday, almost–choke–ten long years ago. I have not yet finished the journalling in my kids’ scrapbooks (the ones I’ve started anyway, through toddlerhood…I’ll NEVER catch up until I’m too old to remember absolutely none of the details), but I can tell you everything about my 30th birthday party! Here we go… 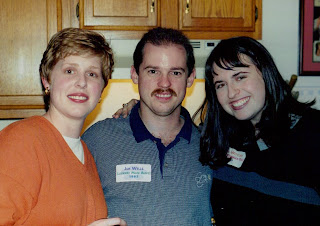 The Conspirators: Kate, Jim, Julesie
The Plan: Jim and Julesie had an idea: “Let’s throw a surprise party!” They started making plans around Labor Day, and brought Kate into the mix. Kate became the decoy: she called me on the morning of November 6 (my actual birthday) and gave me what I thought at the time was The Surprise: she was flying into O’Hare that day to spend my birthday weekend with me! It was the start of a fun, yet oh-so-deviously-planned weekend…

On November 7, Jim, along with the boys, Julesie, and my parents, spent the day furiously cleaning, cooking, decorating, and most likely giggling, while in the meantime…

Kate led a blissfully ignorant Me around Gurnee Mills Mall. I must admit, the whole plan was pure genius. It was only after it was all over when I recalled the many times she checked her watch.

The kids provided lookout services as party time drew near, and when we walked into my own family room? OH THE HORROR! I felt like a caged animal for the first ten minutes!

My first words to my beloved husband after all of the trouble he went through to pull this off? “I’m going to kill you!” For the record, I also threatened Kate’s life. She thought I was kidding.

At this point, I still hadn’t noticed yet another surprise, because everybody was holding masks of my face in front of their own. 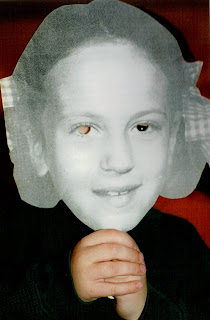 Julesie created these masks, and it was very trippy to see about 50 of myself in black and white…all except for my mom, who was wearing an HR Pufinstuf mask*: 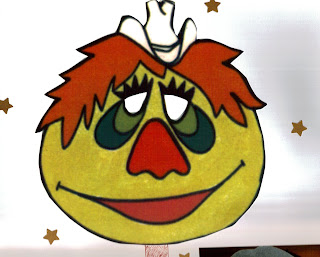 I was still in complete shock from the initial surprise, when Julesie turned me around and I saw my 8th/9th grade boyfriend (and first kiss), my first crush, and the guy who was the closest thing to a brother I’ve ever had. (One of whom I’d had no contact with since 1985, and the other two I’d had sporadic contact with over the years…)They all flew in from Tennessee for the party! 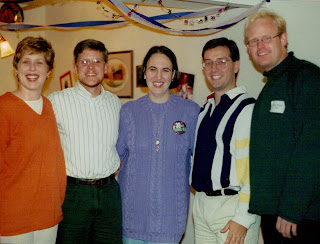 From the left: Kate, the Brother, me, the Crush, and the Kiss
I was completely blown away! The funny thing was, on the drive home from Gurnee Mills with Kate, I had mentioned each and every one of them!

Julesie made name tags for everyone, which had another piece of info: the year in which each person met me. It was a really cute idea.

She also made really cool posters that hung all over the place (even in the bathroom!): 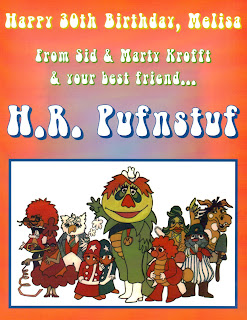 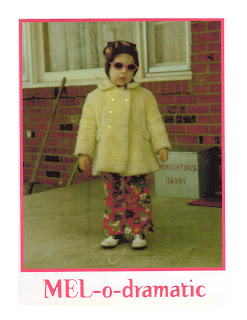 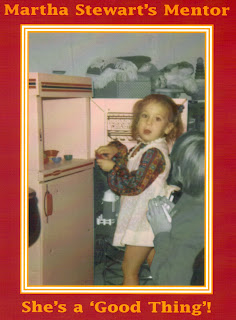 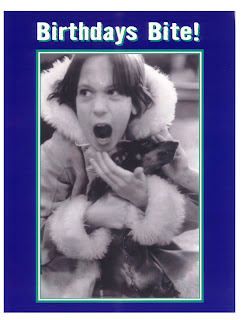 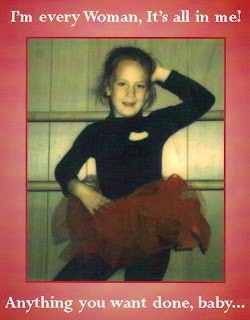 The house was buzzing with activity. Everyone talked, laughed, and seemed to have *almost* as much fun as I did. Julesie made a 30th birthday scrapbook that contained lots of lovely stories and letters from my loved ones…as well as high school dirt, courtesy of Kate.

The party was a big success, and not only does Jim never want to go through the stress of trying to keep such a big secret from me, but I don’t ever want another surprise party! This one cannot be topped. (For me, anyway. Five years later I did the same thing for Julesie!)

*In 1976, my family went to Six Flags in St. Louis. One of the attractions at the time was the HR Pufinstuf Live show. I LOVED the tv show, so this was going to be a big treat for me. At some point in the live show, the “villain” chased another character through the audience with a (fake) knife (that’s the 70’s, kids!). I was completely freaked out, and from that point on, always felt uneasy around mascots and other characters in costume!

So…that’s the scoop! My, how ten years flies by…