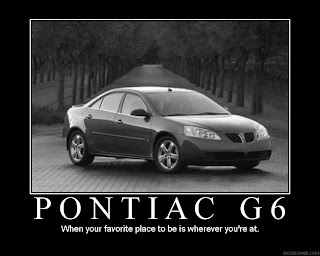 I shouldn’t even be posting now, because I am not in the best mood. However, the family is out on a Boy Scout hike, my sister is in Key West enjoying a drink called “The Dirty Hoe”, and my local friends are otherwise unavailable. Heck, even my Facebook friends are away from the computer. So I will now speak to the blog and hope I will feel a sense of calm when I’m done.

Those of you who keep up with me in real life or even on Twitter know that I have had some car trouble in the past month. My car (model pictured above; not my actual car) has died in the parking spot twice, two weeks apart. It is 1400 miles and 2 months away from the end of the warranty. Should this stuff even be happening? NO.

Twice I’ve had to call Pontiac Roadside Assistance to get it towed to my dealer, where I am now on a first-name basis with several of the mechanics, especially Mark. I am at this point contemplating having them all over for Thanksgiving.

My car has the worst kind of problem: an intermittent one. (If you look up “intermittent problem” in the dictionary, I believe it says “Heck if I know.”) That means they can’t find the problem because just when they are testing my car, my car decides to go all reliable on them. The first time it was towed in, one of the mechanics tried to start it up right away (it didn’t). He neglected to do the diagnostic testing on it before trying to start it again (and it did). Basically they had my car for almost a whole week and were just starting it 8-10 times per day, hoping that it wouldn’t (it always did).

They couldn’t keep it forever, so we picked it up and prayed that something would happen again before the end of the warranty. It did.

Anyway, I won’t go into the whole story because it will take me forever, but the second experience I had with Roadside Assistance was complete and total nightmare. I was sick about it; Jim was angry, and though my car died at 4:00 p.m. on a Wednesday, we were back and forth with Roadside Assistance until 10:30 p.m. when we finally canceled the tow to put an end to the madness, and I had to call back the next day to reschedule.

That time, they had my car for almost a week (provided us with a rental car that time, though). They had to call the engineers at GM because they couldn’t figure out the problem*. The so-called smarty-pants engineers *suggested* replacing the negative connection cord to my battery as a solution. So they did.

We picked up my car again, all of us (especially Mark) keeping our fingers crossed that they fixed it.

But I knew it wasn’t fixed. I can’t explain it; the car pauses for a split second before revving up when I turn the key. I knew it.

And today, sad to say, I can say “I told you so.” I put the dog in her “house” and went to the car so I could run an errand. I put the key in and turned it.

Obscenities spewed forth from my mouth like the 1980 eruption of Mt. St. Helens. The guys were just pulling out of the driveway for their hike so I didn’t say anything because I know this drill quite well. First I got on the phone with the dealer. Mark was with a customer so I talked to the woman who works in the service department, who I really like. I completely lost it on the phone and cried those big, fat, ugly tears as this woman I hardly know, a woman who spends her days as a fellow grease monkey to a bunch of manly men, was doing her best to calm me down and tell me it was going to be okay.

When I was done talking to her, I went to the car and got all of my stuff (gym bag, Sunday School bag, loose papers, etc.) out and put it in the family room, and then went upstairs to call Roadside Assistance to set up the tow. The call went smoothly and I relaxed for a bit while I waited for the tow truck.

I laughed when I found out that the towing company that was sending a truck is called Last Chance Recovery. Seriously, has it come to this?

The tow truck arrived and, just as I was feeling a little better (the guy that helped me out was extremely polite and friendly: I love that), I went back in the house to discover that Roxie had gone into my gym bag and sniffed out a tiny box of two chocolate truffles that someone in my class gave me as a Rosh Hashanah gift. Argh!

It was only two pieces of chocolate and I know from my late, great beagle Bijoux that this amount wouldn’t kill Roxie; at the most we can expect some vomiting and diarrhea later (yippee?). Still though, not what I need today. I leashed her up and took her for a walk on the only reliable transportation I currently have: my legs. Now I’m back, with a million things on my list but zero motivation to complete a single one.

Regarding the car, I’m hoping that three time’s a charm. Keep your fingers crossed.

*I totally don’t blame my dealership for any of this heartache I have been experiencing. I think they have been doing what they can and their level of customer service is superior, unlike every other facet of GM I’ve dealt with so far.

Next post: My Monday Will Definitely Be Better Than My Saturday, So It’s All Good.

Previous post: Searching For Treasure: Check Out My Booty!