Creative Parenting 101: The Tooth Fairy Makes Mistakes Too, You Know!

The same thing happened to us a few years back, when the now-13-year-old lost a tooth, and to make matters worse, it was only his second one. We couldn’t believe that this could happen; I mean, what was the tooth fairy doing with her time, just sitting on her lazy butt watching television and then going straight to bed right after the news, forgetting that this boy had that little white tooth packaged up for her, underneath his pillow? We were in total shock that she could be so forgetful.

We didn’t find out, as you would expect, until the next morning when the boy came downstairs, HYSTERICALLY CRYING. We didn’t have to ask what was wrong, because we knew as soon as he appeared before us. We tried to calm this totally distraught little guy by telling him that “Maybe there were lots of European children who lost teeth yesterday too and maybe she just couldn’t make it here before you woke up” and “No, of course she’s not mad at you!”

We talked a good game, but frankly, we were horrified at the behavior of the tooth fairy. This was unacceptable.

We convinced the boy that we were positive that the Tooth Fairy would come that evening, and told him that he should definitely put his tooth back under his pillow.

As it happened, the Tooth Fairy did come that next night. And she left a note for him, all typed except for the signature. It said:

I feel so bad that I couldn’t make it to your house while you were sleeping last night to take your second tooth. I just had so many 7-year-olds that lost teeth yesterday that I was overwhelmed with deliveries, and then I ran out of money so I had to go to my bank & make a withdrawal from my account.

I don’t normally do this but I feel so bad about missing you last night that I am going to leave you $2. I don’t normally do that. I have a very strict policy you know, $5 for the first tooth and $1 for every tooth thereafter but I’m going to make a special exception for you: just don’t tell anybody, especially that brother of yours. If he finds out that you got $2, he’ll want $2 also. I can’t afford to give everyone $2, you understand. I hope this makes up for missing you last night.

I must go now. I am quite tired from all the stops that I made yesterday so I need a nap. See you again soon. 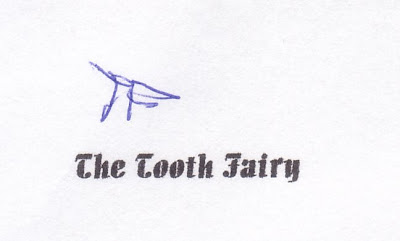 We were relieved that the Tooth Fairy explained her absence, and the boy was thrilled. So thrilled, in fact, that he wanted to leave a thank you note for the Tooth Fairy.

“Why though? She won’t be back unless you have another tooth for pickup.”

“Because I just want to thank her! Please, please, please can I leave her a note under my pillow tonight?”

We relented, and he left this:

Somehow the Tooth Fairy must have sensed that she needed to come back, because when he woke up the next day, his note was gone.

And he was grinning from ear to ear when he made that discovery, missing teeth and all.