Bucking Tradition…’Cause That’s How We Roll.

After one of the most overwhelming weeks in recent history (with no sense of anything letting up in the near future), I decided that I was going to write my freakin’ post about Labor Day Weekend, Part 2…because if I wait too long, it’ll be Thanksgiving or something. So, enjoy. And if you’re hungry, I apologize in advance, for this post is about the Fab Five Pizza Festival! (In case you’re a newbie here at the Scrawl, the Fab Five is made up of Jim, me, the 16-year-old, the 13-year-old, and my sister, who we call Julie but you know as Jules, who has mad skillz, especially in the kitchen.)

Grilling on Labor Day is what everybody does, and we normally are right in there with the crowd. This year, however, because of something discovered on a recent family field trip (which will be my next post, in a day or two), we decided to go against the All-American feel of the holiday (as far as our menu was concerned, anyway) and make pizza from scratch.

The dough recipe we used is something I’ve had for about twenty years; I got it from my mom who got it from my cousin, who also has mad skillz in the kitchen. The title of the recipe is just “Eric’s Pizza Dough”.

The dough has to rise for an hour before you put the toppings on it, so we had to get started early. The recipe makes two cookie sheet-sized pizzas, and we doubled it, the plan being that Julie, Jim and I would each decorate one pizza and the boys would share.

Here is one of the dough balls, rising: 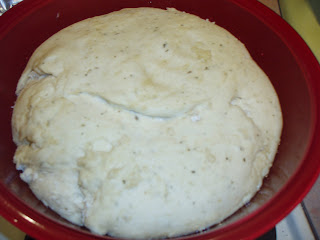 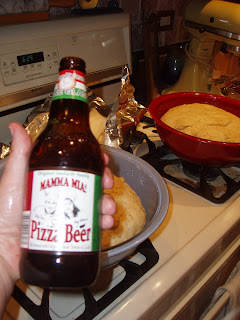 Then we oiled up the cookie sheets and spread out the dough: 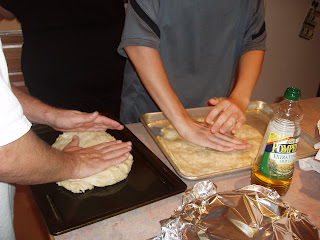 I think it was around this time (or maybe a little bit before) that four of us (not Jim) decided it would be fun to speak with Italian accents. Jim suddenly got quiet; he was probably blown away by the skillz of the rest of us, but we kept trying to get him to talk:

“Okaya, now we makea the pizza. Passsa me-a the sauce-a.”

I have to say, it was hilarious. And we kept it up way longer than probably any other family would attempt. 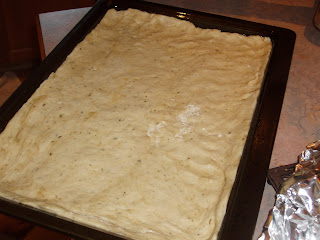 I learn something new everyday; Julesie instructed us to “dock the pizza” by poking fork holes in it: 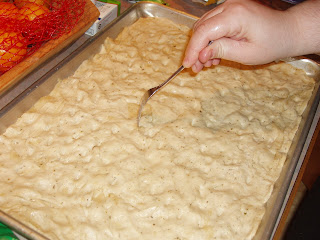 While we pre-cooked the dough for about 20 minutes, we gathered up our fabulous ingredients: sauce, tomatoes that Julesie and the 13-year-old roasted on Saturday (A-YUM-A!), cheese, mushrooms, turkey pepperoni, onion, olives, and fresh basil. WOWZA! 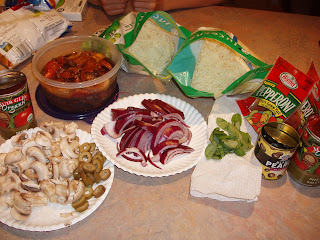 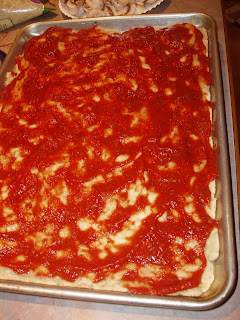 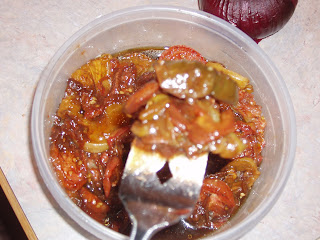 The aforementioned basil (I said FRESH, didn’t I?) 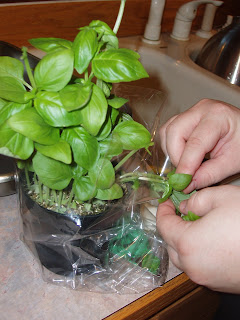 Then we commenced putting toppings on. This one is the boys’. It has sauce, cheese, and turkey pepperoni. That’s it. 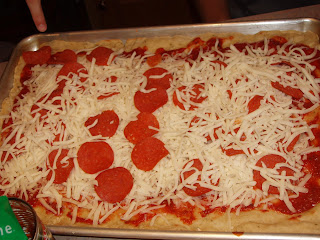 Here’s mine, in progress: 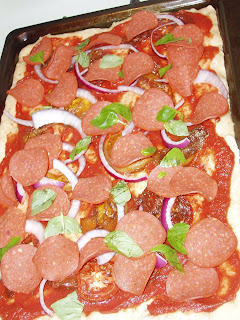 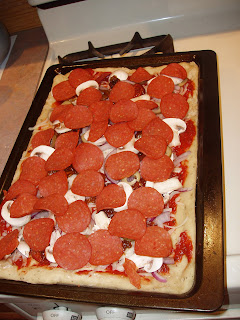 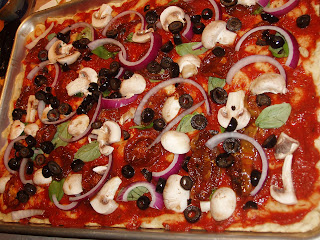 It will come as no surprise to you that Julesie and I had (from opposite countertops) independently decided that the top of our pizza needed a garnish. I was going to attempt a basil tiara but stuck with my initial: 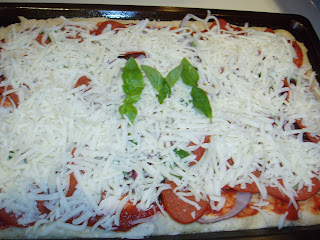 She won by a hair on this category with her creative flower: 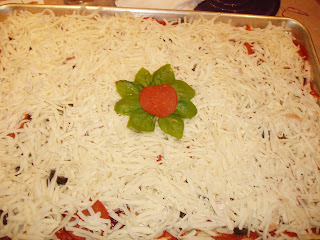 The boys went with no garnish, though the older one did put turkey pepperoni all the way into the two corners of his side of the pizza, so they could tell whose side was whose. (Yes, their pizza had the exact same stuff on both sides, but it’s a territorial issue, you know?) 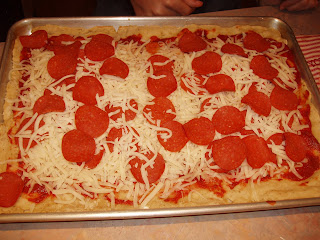 Finally, after what seemed like hours but wasn’t, they were ready!! Julesie’s: 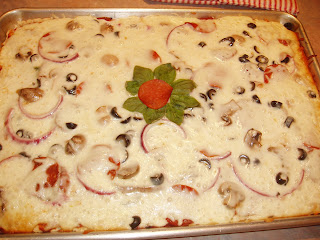 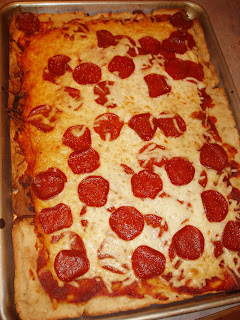 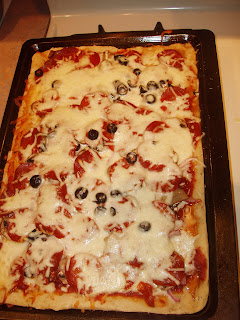 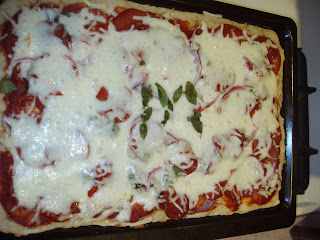 We had lots of leftover pizza, but didn’t mind a bit. It was, as always, fun family times! Or should I say “Fun-a Familia Times-a!” Yum!