The Best Thing Ever When You’re At Home For Breakfast, Eatin’ Sausage and Syrupy Things 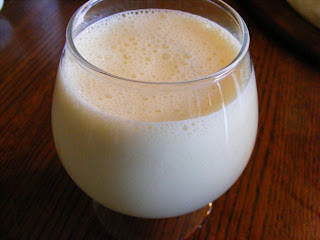 The other day I mentioned that our mall Dippin’ Dots has gone the way of so many Orange Julius mall locations (CLOSED!). After thinking about it, I suppose that Orange Julius was not ever in every single mall in the country; rather, I probably thought that because there was one in each of the few malls I frequented when I was a kid/teen. (Which weren’t many, actually; I’m pretty certain that a mall as we know it today was a pretty new thing in the ’70s anyway! My first mall? Lincoln Mall in Matteson, Illinois: opened in 1973!)

My mention of Orange Julius locations being fewer and far between sent Michelle into a mini-panic, as she thought I was saying that they were all going Bye-bye. Not true. What I can offer, to make up for the panic attack, is the recipe I have for homemade Orange Julius. My mom has been making it since I can remember, and it goes great with any “breakfast with effort”, like pancakes, waffles, Breakfast Pizza (YUM), or whatever. The recipe is almost too simple to be believed:

6 ounces frozen orange juice
1 cup milk
1 cup water
1/2 cup sugar
1 teaspoon vanilla
12-14 ice cubes (For some reason, I compulsively–ALWAYS–use 13 ice cubes. Not 12. Not 14. I use 13. Don’t ask me why: it’s just one of those adorable things about me that you must love without question.)

Put it all in a blender, blend it up, and serve immediately. That’s it. Honestly. (Or should I say “Honest and Truly!?”) Michelle is currently gambling her life savings away in Sin City, so while she’s gone everyone else can enjoy this; hopefully she’ll have enough money left after her trip to keep the internets going til she can stop in here at the Scrawl!

*By the way, I did a search for “Homemade Orange Julius” and there are many sites out there listing a few variations on this. My advice? Though I think the recipe used in my family is the best–feel free to tweak it to fit your own taste! This is America, after all! (and if you’re not reading this in America, you’re still free to tweak!)