If Baby #2 Is a Girl and They Name Her Melisa, I Will REALLY Freak Out.

I actually woke myself up from a dream this morning, laughing. I have been dying to blog about it all day and now that I can actually sit down and do it, I’m thinking that it may not entertain all of you as much as it entertained me, but I’m going to give it a shot.

First, the disclaimer: The following scenario is completely a dream. My dream, in fact. There is not an ounce of anything that has really happened–ever–in this story with the exception of my drinking the occasional Diet Rite and Julie/Jules being my sister and frequent concert companion. This account is merely for entertainment purposes.

The scene: Gwen Stefani and Gavin Rossdale’s house (Now, you know when you start with the two of them, it’s at least going to be a handsome dream!).

The soundtrack: Click the arrow below to play and keep reading…

From what I can gather, Gwen was having a concert for 40 people, right there at the house. In the kitchen, in fact. I was there with Julie/Jules. While we were all mingling, people were going into her refrigerator and getting themselves whatever they wanted. Gwen encouraged it, because that’s the kind of hostess she is; she wanted everyone to make themselves at home.

She looked fabulous. She had her pre-pregnancy body (I told my sister this morning, when I was retelling this dream, that if Gwen has Baby #2 in the next three days I will take that to mean that she–Gwen–and I have some kind of cosmic connection. Julie asked me, “Why THREE days?” I answered, “I want to give myself a little leeway!” For all I know, Gwen is in labor right now.) and was dressed in a white silky top and a dark gray pencil skirt, because you know she’s one of the few gorgeous people in the world that can rock a pencil skirt. Her hair was all pulled up in one of those funky two-bun hairstyles that, again, can be rocked by only a few gorgeous people in the world.

Kingston was not there, by the way. I have no explanation for that. He was probably at a playdate with Shiloh Jolie-Pitt.

We socialized for a while, and Gwen and Gavin were circling around, spending time with everybody. (An aside: Gavin was at House of Blues Chicago a couple of weeks ago. One of the clients at the salon where I work was telling us that her adult daughter went to his concert and got invited to the after-party. She said that he and all of his people were AMAZING and very down-to-earth; in fact, they got invited back, to the following night’s party, too!)

When it was time for Gwen to perform, she decided that the kitchen probably wasn’t the right place to perform. (I am so logical when I dream, don’t you think?)

She told everybody to make sure to grab a drink on their way out to the yard off the kitchen, so I went into their refrigerator and I can tell you that she stocks it with cans of Diet Rite (I grabbed one) as well as those glass bottles of Coca Cola. I found the refrigerator to be very clean. (Are you laughing yet? Come on! I amaze myself with the detail I took away from this dream!!!)

I went out the door and sat on the lawn next to Julie and then, just as I got situated, realized I forgot my camera. I went back into the house and retrieved it. When I went back outside, the crowd was gone. Whaaa? I walked around to the other side of the house and found them all, and Gwen was up on a full concert stage set-up with a full band, the lights, everything. The Harajuku Girls were not there. We cheered as the music started up, and Gwen started to sing “In My Head”, which is a No Doubt song–and what you’re hearing if you pressed the arrow on the Youtube thingie up there. (My subconscious must have been wondering when the new No Doubt CD will be released! I think they are writing it right now…) She was, of course, awesome. The crowd was going crazy, and sounded way bigger than the 40 or so people that were actually there.

Now, if that all wasn’t weird enough, here’s where it gets *really* strange.

We were enjoying the concert alot when Julie was telling me to “look over there”; then she manuevered my face in that direction, much like she did the day we were about 25 feet away from Tom Cruise, way back in the day before Katie Holmes and before he seemed to lose his marbles. I am making a draft of that story right now so I don’t forget to tell you about it, because THAT story is something! Anyway, I looked to my right and saw a news camera crew making their way up to where we were. I forgot to tell Julie this, but the person carrying the camera looked a heck of a lot like Matthew Broderick.

Julie said, “Oh, that’s so-and-so (She said a name but I can’t remember it). She’s the reporter I talk to at all the concerts.”

In my dream, though the reporter had another name, I recognized the gorgeous face immediately. It was Washington D.C.’s WUSA-9 Traffic Anchor and frequent Suburban Scrawl commenter Angie Goff: 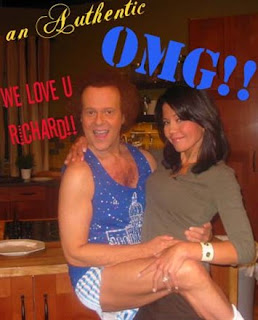 This Angie Goff-like reporter put her hand on Julie’s cheek and exclaimed, “Oh Julie! So good to see you here!”

And then, somewhere between dreamland and awaketime, I started thinking about the totally interesting, sometimes funny, often stupendous things that happen–or that my sister MAKES happen–in her life, like this, this or this (believe me, the examples are MANY), and I totally woke up laughing. I also decided that, in the tradition of my sister, I should go ahead and ask the question:

If somebody out there is reading this because they work for Gwen Stefani and/or Gavin Rossdale and they are paid to periodically Google, to see what people are talking about, I just want to ask please please please…if Julie and I can get to Los Angeles (heck, OR London) in the next year or so, can we come over for a Diet Rite?

P.S. My money is on Gwen to give birth this week.

Tagged as: An Interesting Turn of Events, Will Someone Please Slow Down the Crazy Train

Next post: I Have No Doubt That a Tiara Will Someday Adorn This Girl’s Head.