A Dinner of Olympic Proportions 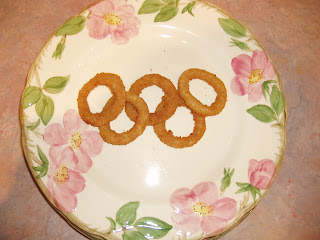 I am a diehard Olympic fan. I love the drama. I love the stories about the athletes, and I love the fanfare. I was overjoyed when, years ago, it was decided that they would make an adjustment so that we only had to wait two years between Winter and Summer Olympics, instead of waiting four years and having them both in the same year like the olden days. (1992 was the last year in which both Summer and Winter Olympics were held the same year.)

In the Winter Olympics, my all-time favorite athletes were Grinkov and Gordeeva (I read her book “My Sergei”: WHAT a love story!), and I rooted for them even though they weren’t American. Later I was also fascinated, along with everyone else, over the Kerrigan/Harding scandal (“Why??? Whyyyyyyyy???).

My favorite athletes in the Summer Olympics have mostly been gymnasts like Mary Lou Retton (1984 Gold Medal: All Around Gymnastics) and swimmers (Michael Phelps, of course), but I like to watch it all.

One of my all-time favorite Olympic memories? Kerri Strug, sealing the Gold for the U.S. Womens Gymnastic team with a vault after which she landed on one foot (due to injury)…and then seeing Bela Karoli (her coach) carry her to the medal ceremony:

Last night’s opening ceremony in Beijing blew me away. Words can’t even describe it. All I can say is, I hope you saw it. If you didn’t, you missed something really special. The 300 million dollar show put on by Director Zhang Yimou was like a dream sequence. The technology was amazing. It made me feel so happy for China as a nation. I had watery eyes practically throughout the entire thing, and my chin was on the floor every five minutes; I was totally awe-struck at what they had accomplished. The waterworks really began when Yao Ming (plays basketball for the Houston Rockets) walked with (and held him up at the end) 9-year-old Lin Hao, a victim of the terrible earthquake earlier this year. Twenty out of his class of thirty were killed, and this boy, after digging himself out of the mess, went back in to help save a couple of his friends. When asked why he did that, he said that as one of the Class Leaders and Hall Monitors, it was his job. Wow. That’s all I can say. What a hero.

I knew that the Opening Ceremonies would be big, so I planned a special dinner for us that had potential to be memorable as well. We ended up having appetizers from around the world (like egg rolls and taquitos) as well as onion rings (get it? onion rings…olympic rings!!). I served dinner on our fine CHINA, and Jim even had a couple of Tsingtao beer, which is imported from China. For dessert? We had Belgian-style mini eclairs, which we broke into when the Belgian team showed up during the Parade of Nations. I mean really, how fun is THAT?

I guess I’d better put on my thinking cap for our Closing Ceremony dinner! The 2012 Olympics are in London. Maybe we’ll have fish n’ chips!

Next post: What’s The Point of Having Kids If You Can’t Torment Them Now And Then?

Previous post: I Understand the Lighting Concept Behind Cosmic Bowling, But The Shoes Are Ridiculous.