What Independence Day Means To Me

Happy 4th of July to all of my American friends out there! (and Happy Friday to everyone else!)

Naturally I could do a post about the freedoms of America and a typical post about how great the Declaration of Independence is and all, but I’m not going that route today. Of course, being an American, I have an intense appreciation of all that.

Instead, since this blog is my blog and it’s about me and my family, I wanted to share my personal reflections on the 4th of July itself: the calendar date. When I think of the 4th of July, in addition to all of that patriotic stuff (hot dogs, fireworks, apple pie…), these things come to mind:

***Waaaaaay back in the olden days (1976), my mom made me the most adorable Betsy Ross costume for our school play (and she also knitted an American flag blanket that we used). I actually wore the costume outside of school, with it being the Bicentennial and all, and I distinctly remember wearing it on July 4, 1976 when we visited relatives in California. I have the funniest picture of me, seven years old, wearing the Betsy costume, standing poolside next to my 3rd cousin, who was a teenager wearing a bikini. When I locate this photo, I will post it.

***I remember decorating my bike for a 4th of July parade in my grandparents’ neighborhood in the late 70’s.

***Every couple of years we spend the 4th with Anonymous, err, I mean Dawn (get that Blogger account already, would you???) and her husband and son. Her husband is like a kid in a candy store when he can shoot off fireworks. (Not that he does it, mind you, because recreational fireworks are illegal in Illinois.) So let me rephrase that. If he were ABLE to shoot off fireworks, he WOULD be like a kid in a candy store. Yeah. That’s it.

***Every year for the past seven we’ve lived in this house, we have a 4th of July tradition. Jim leaves early in the morning to participate in a 62-mile bike ride in a neighboring suburb while we sleep in. At 10:00, our neighborhood parade begins. This parade is so cool; it’s very “Mayberry”, with the kids on their decorated bikes, the firetruck and police cars, the homemade floats, the various scout troops of the neighborhood participating (and throwing candy to the people watching), our friend who is a DJ throwing things like those bead necklaces or flashing American flag pins, and the other neighbors pushing their baby strollers and walking their dogs. One year we even had an 18-wheeler from Keebler in the parade, because someone in our neighborhood worked there. (The driver threw Keebler products!) When the boys were in Cub Scouts, they were on a float. Since then, however, they “participate” with me by pulling chairs down to the end of our driveway and being a parade watcher. We sit there (with Roxie on the leash: she barks her head off) and get a bunch of candy thrown at us and then we run around the corner where the parade will pass through again. Cheating? Heck no! They need parade watchers all over the neighborhood, right? We’re just filling a need. I look forward to the “Hometown feel” of this parade every year. (It starts in less than 2 hours! Yippee!)

***The 4th of July that made the most lasting impression (literally) was 2001. That was the day when the thirteen-year-old, then six (but you did the math already, right?), was outside with the neighbor boy. They were playing with a Stomp Rocket that the neighbor boy had just received as a gift. Suddenly, our boy had a face full of blood. Turns out he was hovering directly over the stomp rocket, and the neighbor boy stomped. He didn’t do it maliciously; they were just playing. Apparently the neighbor boy didn’t think to tell our boy to move. Anyway, that stomp rocket was the gift that kept on giving: 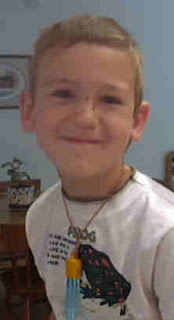 His nose still has a little scar on it. But everybody needs a good “scar story”. I hope this will be his only one!

Happy 4th of July, everybody!