Jim and I had loads of fun yesterday, finishing off our holiday weekend. We went to see the arena football playoff game between the Chicago Rush and the Grand Rapids Rampage at the Allstate Arena with this chick’s parents, the young and effervescent K and R.

What? You have not heard of arena football and had no idea that Chicago even had a team? Well, it’s a pretty amazing phenomenon. Arena Football has been around since 1987, but it only seems to be catching on over the past few years. Here in Chicago, the Rush started making the news a little more when Mike Ditka, famed coach of Da Bears, came on as co-owner. You can read pages and pages about the sport online like anything else, but basic information about the game is that the field is 50 yards long and 85 feet wide. The goal posts are half as wide as they are in the NFL, and the rules are slightly different.

My first impression, being in the Allstate Arena among all the fans of the game was that the Chicago Rush fans are HARD CORE. I’m not sure I’ve ever seen anything like it, and the atmosphere was energizing. I have also never seen so many mohawks in my life. Here’s a nice one: 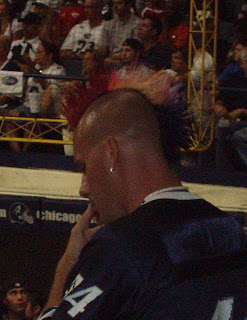 As game time loomed closer, the seats filled up and the crowd was screaming. Loud music was playing to motivate both the crowd in the stands and the players who were warming up on the field; it reminded me a lot of the Chicago Machine Lacrosse game we attended. A few minutes before game time the announcer who, oddly enough, I SWEAR sounded just like Ira Glass from This American Life, (a strangely low-key, laid-back voice for arena football, I thought) said in the most boring tone possible, “Let’s welcome the Grand Rapids Rampage.” I wouldn’t have been surprised to hear a yawn at the end of his sentence.

The opponents ran onto the field to an arena full of booing Chicago fans; I found it hilarious. That basically summed up the Rampage’s entrance.

Then it was time for the Rush to come out. The lights went down and some game highlights were shown on the Jumbotron. After that, we watched what was, no doubt, the most dramatic, fun, and campy team entrance I have ever seen. Enjoy for yourself: (skip the Jumbotron to about 50 seconds in: and BTW, this was from a game last year…I found it on Youtube, of course!) 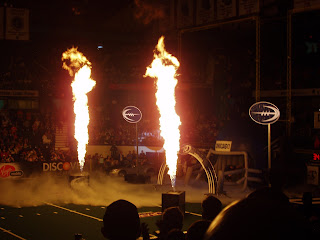 The game itself was thrilling. It was action-packed; a Rampage player was even ejected from the game. During halftime, a fan kicked a football just about as well as one of the pro players would have and won an all-expenses paid trip to the Arena Bowl for his family. When Chicago made their touchdowns, the crowd went crazy. When we were “wronged”, all hell broke loose. Emotions ran high for the 2-hour plus event. I loved every minute of it. 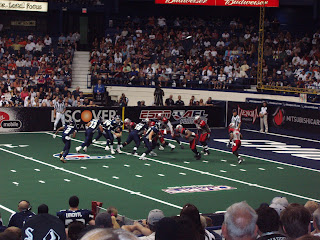 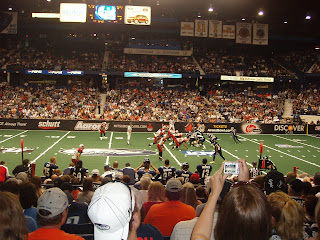 I also learned that arena football even has dancer-cheerleaders. The Chicago Rush has the “Sobe Adrenaline Rush Dancers” (product placement alert!). They were awesome. K and I decided that we totally wanted to be a part of the Sobe Adrenaline Rush Dance Team. We were practicing our arm moves in the stands, and we were darn good at it! I hope that next season’s audition date works well with our schedule.

After the game, we headed back to our part of suburbia and hit PF Chang’s for dinner. (Can I get a Woot?) It was really great for Jim and me to go out with another couple, since we do that so rarely. Good friends, good game, good food, good conversation.

All in all, an excellent day with lovely people!

Next post: She Nailed It Right On the Head (Narrowly Missing My Tiara)