We wanted to spend some quality family time together the day before the kids left for camp, so on Saturday we pulled out one of our favorite board games, Risk.

Risk is not a game that you play if you only have a few minutes; on the contrary, you’ve got to have at least two to three hours ahead of you. If you want to play something that doesn’t take that long, you’re better off sticking with Jenga.

I used to play Risk with my cousin when we were in our early teens. I have to admit that back then I really had no idea what I was doing and he almost always won, but we were tight back then and I just enjoyed spending the time with him so it didn’t matter to me that I lost. The game just seemed way too complicated to bother really learning it. (That sounds so “girly”, doesn’t it??)

The object of Risk is to “Dominate the World”. To do this, you take turns placing your armies (the various plastic pieces represent one, five, or ten armies) on the countries all over the board. On each turn you roll the dice with an opponent to try to take over the countries they are occupying. Occupying entire continents gets you extra armies to place on your countries each time your turn comes around. (Don’t get it? Welcome to my life when I was fourteen!) Basically you have to have some kind of strategy to succeed. Once all of your armies are conquered, you’re done and have to find something else to occupy your time while everyone else in the house is still playing.

A few years ago we purchased the game and started playing with the boys. The younger one was probably about nine at the time. He understood how to play the game but had the strategies of, well, a nine-year-old. He usually went out first. My fondest memory of those early games is of the nine-year-old ALWAYS wanting armies on Venezuela, and he would shout out “Ve-ne-ccccccccuay-lahh”. There’s no way that you are actually reading it the way he said it and I don’t think he’d do it for the camera at the age of thirteen so you’ll have to trust me that it was one of the funniest things I’ve ever heard.

These days, there are a few things that happen each and every time we play the game.

1. I always go for Europe first. Surprised? Europe is mine. I defend it more than any other area on the board. They all know this, and they love to break up my–ahem–“monopoly” of European countries.

2. Jim always goes for Australia. WHY? No offense, Katie, but Oz is all the way down there in the corner of the map and you only get 2 extra armies per turn when you occupy the whole continent. Australia is great and all, but in the game of Risk, not very valuable.

3. The thirteen-year-old always goes for North America. Always. I guess he feels patriotic. Greenland is included in North America in the game and normally he and I have an unspoken, unofficial agreement that he won’t attack my Iceland and I won’t attack his Greenland until we absolutely have to.

4. The sixteen-year-old always goes for Asia. This is always the area of the board where we have the most frequent takeovers. We don’t pronounce the names of the countries correctly on purpose, and whenever we talk about “Ural”, we say “Ur-all, ur-all, ur-all”, saluting Molly Shannon on Saturday Night Live, doing Elizabeth Taylor drawing lottery numbers and making fun of when Taylor appeared (disoriented and just plain weird) on the Oscars years back. You’ll get the “Ya-all, ya-all, ya-all” piece in the very last couple of seconds:

5. The boys constantly, I mean for the entire game, fight between Alaska and Kamchatka. They build up their armies until you can’t see the country/state underneath them, and then they roll the dice for what seems like hours. One will conquer the other and make further headway into that guy’s continent, and then the war will reverse on the other one’s turn to play. It’s hilarious but perhaps part of the reason why we’ve had games that can last four to five hours long. 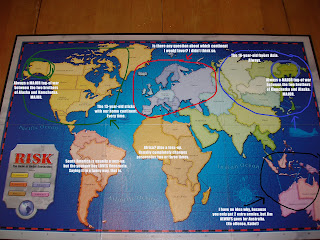 All in all, Risk is a really fun game for us. It’s way less annoying than Jenga, more complex than Life, and all in all, just a really good time. If you’re ever in town and want to play, let me know. But Europe is mine.

Next post: Would You Pay To Let a Tank Full of Little Fish Munch On You?