He’s Learned How To Order Soup, Too.

On Friday, I read a post over at Sue’s about what to do for a jellyfish sting. She remembered the Friends episode where that very thing happened, and because she watches television, she knew what to do. It was funny that she posted that, because I had this story “on hold” until I could let my George Michael post simmer here for a couple of days:

Though Jim is really fond of educational television like the History and Discovery Channels, I prefer to watch shows that are on the entertaining side, like sitcoms or reality tv. Not that you can’t learn anything from those; how many times have you ever quoted from “The Brady Bunch” (“Mom always said not to play ball in the house!”) or other shows that provided you with advice on a wide range of topics? Apparently, learning from sitcoms runs in my family.

My boys are not fashionistas, to say the least. Generally they could care less what they wear. Well, they have opinions about their wardrobe but not really strong ones. I don’t recall ever fighting with them about clothing. Basically if they are not with me when I buy them clothes, I ask them to tell me honestly if they will wear the items or not before they take off the labels, and if they don’t think they’ll wear the clothes, I’ll take them back for a refund. Luckily, I am pretty good at knowing what they like.

Where we have hit a rough patch? They don’t always tell me when clothing items are getting too small (or, I guess the boys are getting TOO BIG). As I have folded laundry over the past few months, I have noticed the size of the 13-year-old’s underwear in relation to his size and thought, “How is he even fitting in these?” I bought him some new, bigger boxers a couple of months ago and he’s using them, but still wearing the old ones.

Finally, the other day I had enough. I saw those little baby boxers (not really baby boxers, but they are S-M-A-L-L!!!) and called the boys to the family room.

I said, “You know, if your underwear is too small and you don’t have enough of the right size, you need to tell me that you need more…these have got to be too small for you, aren’t they?”

The 16-year-old piped up, “Duuuude, you’ve got to wear the right size undies; otherwise your sperm count goes way down!”

My mouth dropped open. “Huh? I mean, right. But what? Who cares about that right now? (Thinking to myself that perhaps they BOTH should wear really tight undies for the next 10 years or so!) And how did that pop into your head?”

He replied, grinning, “Seinfeld. I learned that from Kramer.” 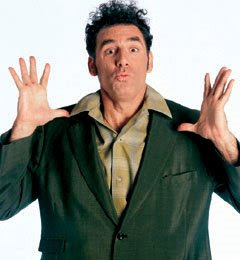 Previous post: And I Don’t Even Work In An Office.