By George, She Got It!

So you remember this.

As planned, I picked my sister up a little after 5 and we headed towards the McD’s to get dinner for the car. Suddenly, she gave me some amazing news: we would not be sitting up in Section 303 as the tickets I purchased said we would…we would be enjoying FREE SEATS in Section 122, Row FOUR!!!! I am not at liberty to give any details about the sequence of events that led to this moment; I can only “ooh” and “aah” over my sister’s ingenuity, and allow you to do the same. (She didn’t steal the tickets, don’t worry: there was no foul play or questionable behavior involved!)

We spent the next 90 minutes in the car (Chicago traffic, you know) getting watery eyes and shrieking “I can’t believe this!”, and then we picked up our tickets at the box office.

For your enjoyment, I have created a visual aide that will hit home just how exciting this was. Click on it to enlarge. 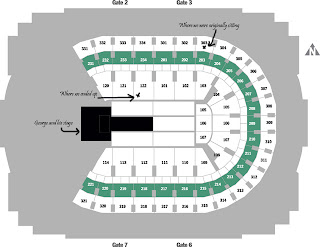 We had about 45 minutes to burn, so we checked out the merchandise counter. T-shirts (gorgeous ones) started at $40, so we bought keychains that I will attach magnets to. (You see, we collect magnets from all the shows we attend…) Those were only $5. I really wanted a t-shirt, but my budget just wouldn’t allow it. Wah.

But we had great seats! So who cares about a stinkin’ t-shirt???

We paid an outrageous sum for margaritas. But we had great seats! So who cares about an $8.00 margarita???

The people-watching aspect was glorious. There was a girl–okay, woman–who was wearing a denim jacket with a gorgeously air-brushed portrait of George on the back. The front was hideous, however. It was pastel pink and blue and had randomly-placed rhinestones all over it. If I’m remembering correctly (and if you’re a regular reader you’ll know that the chance of that is about 50/50), I think her name was even air-brushed on the front. I am certain that this denim jacket was from her high school days.

I saw a woman wearing a George watch. That was awesome.

I saw a woman who seemed to be with her mother and sisters, wearing an aqua-colored floor-length dress.

I saw two women wearing plain-white T-shirts that just had “Wham” on the fronts, in black iron-on letters. Remember these women; I’ll call them the Wham Girls. They’ll figure into the concert part of the story.

We did not see too many people under 25, but I wasn’t surprised by that. And not too many older folks either. There seemed to be a pretty strict age demographic of about 30-45 or so.

And I had to take a deep breath for a moment, because I just realized that I am just barely in the upper third of that demographic.

Give me a moment.

Okay. Where was I? Ah yes, pre-concert. The tickets said “8:00 Prompt” and there was no opening act (no need!). We wondered if he would really begin at 8:00. We went to our seats–no, our GLORIOUS SEATS–at about 7:50 and just couldn’t believe the view. We estimate that we were about 50 feet from the stage. Just that realization alone was thrilling. We weren’t going to need the binoculars that I forgot to bring anyway!

The music that was playing while everyone was getting seated was very “Ride of the Valkyries”.

It was bizarre for this kind of concert, but sort of fun. 8:00 came and went. We waited over an hour for Prince on his Musicology tour (TOTALLY WORTH IT ANYWAY), so we were fine to wait for George. As 8:15 approached, the music got louder and louder, and the lights went down. People went NUTS.

Okay, Julie and I went NUTS too. I started to get very emotional as his band started to play and we heard George singing from backstage. Suddenly he walked out and we all could have torn the place down, we were so excited. Everyone got on their feet and we were all screaming our heads off. 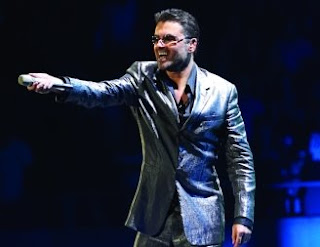 Unfortunately I did not take this photo. My cell phone camera sucks. But this is what he was wearing. Enjoy for a minute before moving on.

He was all smiles and gave equal time to all parts of the stage as he performed. The set was very large, but simple. It was comprised of a huge screen behind him that flowed down to make up the stage floor, a huge screen on either side, and the catwalk. (Actually, as I’m sitting here finding video and photos to supplement this post, I am realizing that he doesn’t use the catwalk at every show. So we’re even luckier than we thought!) His band was actually placed vertically on a couple of different levels on either side of the big screen in the middle. His six backup singers were the only other people on stage with him–but only occasionally. Most of the time they were singing near the band. I made the comment to Julie (and the writer of one of the reviews I’ll link to later had the same thought) that I enjoyed the focus on George rather than a complex, overdone set.

He said hello to Chicago and thanked all of his fans for the last 25 years of success, and then promised that he would work his “arse” off for us. And that, he did.

After he sang “Fastlove”, he went right into a really slow version of “I’m Your Man”. Then he stopped and laughed, saying “I’m such a tease!” Then he sang the real version. While he was singing, the original video played on the screens.

It was surreal to see this mature, polished looking man belt out this awesome song while a video played in the background, showing the young man he was back in the day, probably unaware of the success he would eventually achieve.

In fact, his usage of those huge screens was a really fascinating part of the show; they provided all sorts of great backgrounds for him from just a colored “light show”, similar to what you can put on your computer as a screensaver or the Visualizer feature in iTunes, to videos of Dita von Teese or older music videos like “I’m your man” and “Too Funky”.

While he sang his biggest hits, he held out the microphone and encouraged everyone else to sing along (no encouragement needed!). I love that; it was so much fun!

After each song finished, the crowd continued to go wild and the Wham Girls (remember? scroll up if you don’t), who were behind us by a couple of rows, also screamed in unison, “WE LOVE YOU GEORGE!” Now, nobody but the people around them could hear them. George certainly couldn’t hear them. But they didn’t care. They screamed it many, many times. I found this amusing. I don’t know why.

The first set was comprised of:
“Waiting (Reprise)”
“Fastlove”
“I’m Your Man”
“Father Figure”
“Hard Day”
“Everything She Wants”
“One More Try”
“A Different Corner”
“An Easier Affair”
“Too Funky”

At the end of the first set, the back of his glisten-y jacket was started to show his sweat, so it was obviously time for an intermission. He said he’d be back and everyone made a beeline for drinks and the bathroom, but not necessarily in that order. The huge screen had a 20-minute timer on it. Towards the end of the intermission, the video for “John and Elvis are dead” was shown, and the crowd started to get all geared up for more George. He came back when he was supposed to (in a fresh suit) and got going on the second set, which started with one of my favorite songs and one of my favorite performances of the night, “Faith”: (NOTE: Not my videos. Where’d I get them? Everybody: “YOUTUBE!”)

The second set was made up of:
“Faith”
“Spinning the Wheel”
“Feeling Good”
“The First Time Ever I Saw Your Face”
“Roxanne”
“Kissing a Fool”
“Amazing”
“Flawless (Go to the City)”
“Outside”

His rendition of “Roxanne” was very cool: I loved it. He went backstage after “Flawless” and came back out in a police uniform for “Outside”: 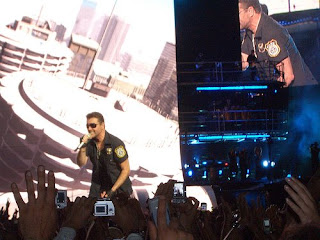 Again, not my photo. But this person had great seats AND a digital camera: LUCKY!
(According to Wikipedia: The single “Outside” was a humorous look at his arrest for soliciting a policeman in a public restroom.)

Then, it was time for George to go. (Warning: excessive Exclamation Point usage ahead!)

We didn’t want him to!

So we made noise!

Instead of holding up our lighters, which we don’t have because the majority of us know now that smoking is bad for you, we all held up our cellphones so he would see the light and hopefully come back to it!

You guessed it: I took THIS one with my crappy cell phone camera.

And he did! He sang “Praying for Time” and then this one, which got everyone swooning:

And then he left AGAIN!

But we still wanted more!

And out (again) came the cell phones…Come to the light, George! Come Back!

And he did. Before he sang “Freedom”, I discovered that great minds think alike. He told the crowd the same thing that I tell my Wednesday spin class:
“This is really the last song, so I want you to use up all your energy and not have anything left!” Who knew that George and I say the same exact thing? Cra-zay-zee!

Here are some of my crappy cell phone photos.

Julie, I think, got photos that are probably way better. Go to the HOJ, so you can read about it from her perspective!

All in all, it was a fantastic evening. We had a great time, with GLORIOUS SEATS. We danced, clapped, and generally raised the roof. I just downloaded George Michael Twenty Five from iTunes, and my car is going to be George Michael Central for the foreseeable future. I’m still in disbelief about the entire experience!

Want more? Click here and here for reviews of the show!

Next post: And I Don’t Even Work In An Office.

Previous post: I’m TOTALLY Not Being a Jerk Right Now.