Speaking of kids growing too big for their stuff, the older one has needed new rollerblades for a long while now. He started blading when he was about seven or eight, and really got into it. I love that he loves it so much.

He loves it so much that he eats rollerblades for breakfast and spits them out. We have gone through several pairs of blades in the past three years: at one point when his feet got big enough, he even wore my neglected (only used twice) rollerblades.

And he wore them.

And he wore them.

And he wore them out.

We have never spent the money on Rollerblade brand blades, because there is always something else that money is needed for, AND these feet just keep growing so it always seemed like a temporary investment. As a result, the kid has been unable to use his blades anymore at the point where he wears out the brake or something, because we can’t find replacement parts for the off-brands.

He finally decided last year to save up for the good skates. In the meantime, he has stuffed his feet into blades that are too small. I’m not going to share the size discrepancy here because in some way I feel like not sharing that detail would make me less of the bad mom I feel like I am for allowing him to do that. I recommended to him that he stop using the too-small blades, and he did cut back, only skating once every other week or so, but still he thought that stuffing his feet into the old blades was better than nothing.

Finally, the other day he had enough in cash and gift cards to purchase his new, properly-sized GOOD, brand-name Rollerblades. He and I went to the store and found a pair that was originally $170, on sale for $99. Oh, happy day!

As he took them out of the box to try them on (Size THIRTEEN!! HOLY COW! Do they even make skates bigger than that? What happens when he grows out of these??), he ran his hands over them and ooh-ed and ahh-ed for a minute before sliding his foot into one of them. “Ahhhhhh!” he exclaimed as his feet slid in with no effort, as if they were butter-coated.

With only one skate on, he glided around the floor displays with a big grin on his face, looking a little like Scott Hamilton on ice.

“I’ll take ’em!” he exclaimed. He happily paid for them and we went home so he could try them out. 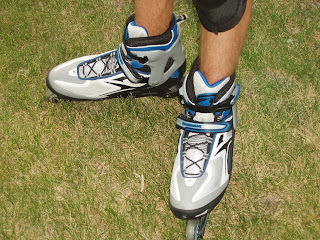 Now, normally when Roxie sees the kid putting on his skates, she knows he’s getting ready to act like Cesar Milan (The Dog Whisperer) and blade her around the neighborhood. It’s a hilarious sight, this 27-pound beagle madly running, ears flapping in the wind, dragging this 5’8″ teenager. She actually pulls him for a mile without stopping when she’s really excited. This time, he wanted to blade alone first. So she had a fit: 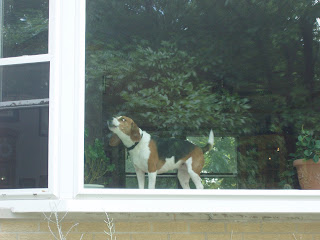 Arooooo! Take me with you!!

Finally, after a couple of laps around our ‘hood, it was her turn:

Afterwards? She was exhausted. He was thrilled with the new skates, and dropped her off with me so he could make a few more rounds. 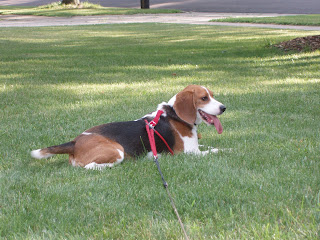 And everyone slept very well that night.