Lucidity Is In The Eye of the Beholder

A few weeks ago, I was thrilled to find out (because he told me) that the thirteen-year-old had created a Summer To-Do List. Thrilled is putting it lightly, actually. My joy came from several sources:

1. I am excited that this boy wants to get some goals accomplished while school is out.
2. I am excited that he is really thinking about what he likes to do.
3. Okay, I was excited because the Fine Art of Making To-Do Lists is yet another fabulous quality inherited from his fabulous Mom. (uh, that’d be me.)

I can’t remember what I was doing when he told me that he made this list, but I wasn’t in a position to check it out. (He told me it was on his bulletin board in his room)

I forgot all about the list until the next day, when the kids were at school. I was putting laundry in everybody’s respective rooms when I came upon the list: 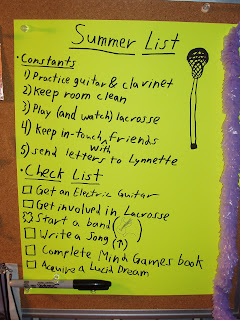 Now that you’ve read it, I will tell you that when I got to the item at the bottom my blood pressure went up a bit because it sounded like code words for something else, which would be an odd “goal” for a thirteen-year-old boy to state on a to-do list, but if there was ever a boy who would find a way to do that, I figure I would have given birth to one of them. If I have to explain to you what I thought it was, well, I’m not gonna. But I knew I had to address it with him, because that’s what I do. I figured that if he got squirmy and sweaty and cagey, I’d have my answer.

In the car the next day, I said, “Oh! I almost forgot to ask you! I saw your list in your room; it looks really great.”

“But I have a question. Tell me, what is that last one: ‘Acquire a Lucid Dream’?”

I am happy to report that, without hesitation, he said “OH! Yeah! It’s from my Mind Games book (see his list; it’s on there)! There are these dreams called lucid dreams and they don’t occur very often, but…blah blah blah….” (He explained it to me extensively.)

So I felt a little like a jerky mom, jumping to conclusions in my own mind. Whatever. We had a lovely conversation about this concept. He is fascinated with things that play with the mind, like magic. He adores Criss Angel, and would like to bend spoons with his mind. So anyway, I was wrong. And happy to be.

And of course I had to get the book from his room when he was at school the next day, to read all about it myself. Here is the information he was talking about, from the book Mind Games by Michael Powell (click it to make the image larger, if you want to read it): 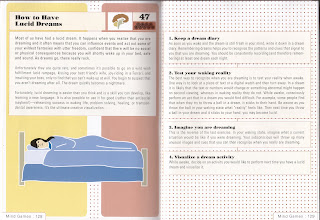 As far as the rest of his list goes, I think he’s got some good goals goin’ on there:

Lynnette is a girl who was his really good friend in elementary school; she moved to Kentucky a couple of years ago and doesn’t have an e-mail address that he knows of, so they write “real” letters, old-fashioned style: snail mail!

It’s pretty clear that he wants to play Lacrosse: he announced that a month or two ago and already bought himself a stick to practice with.

He is within a few dollars of his goal in his efforts to save for an electric guitar. I told him that he couldn’t buy one until summer, even if he had the money. We didn’t need anything else to compete with schoolwork! But I expect that the nagging to take him to the store will begin in less than one month, and that’s fine. Yet another thing he will have saved for on his own, and will therefore care for it like it’s a baby.

I love how the check box for “Start a band” is not a square like the others, and where he has written “Write a song”, he drew an arrow pointing to the band, to make it clear that he will be writing a song for this band he will start. He also wanted to make it clear to all who look at the sign, apparently, that he will be playing electric guitar in this band, because he felt the need to draw a picture of it. Awesome.

Summer is going to be amazing this year. School is out in two days and we already have a plan. Can’t get much better than that!

Previous post: I Think I’m Ready For Another Journey…