I’ve Got a Hot Date With An Old Bag on Monday.

YES, I actually said that once, in the company of family members, out of total and complete despair. (Julie will verify.)

Starting Monday, I will be riding my bike more. How much more? Alot. Which is not saying much.

You would think that, as a Tiara-wearing Spin Princess, I would be an avid bicycle rider, outside in nature and stuff. Wrong-o.

Although I enjoy the occasional leisurely bike ride with the family, in the neighborhood and for a special event in the city, bicycling is JIM’S thing, not mine. My husband thinks nothing of signing on to a Century, which is a 100-mile (in a day) ride. Bicycling is what he does for about 80% of his workout time. He logs about 5,000 miles each year. He rides his bike the 4 miles to work whenever it’s warm enough, and when he worked 20 miles away several years back, he commuted by bike then, too. Summer season is, obviously, bicycle season, and we watch alot of tours: the Tour of California, the Giro d’ Italia, la Vuelta de Espana, and of course, the Tour de France. Watching it on tv as an Armchair Cyclist, I really do enjoy. Phil Liggett‘s voice is like Butter to me; I could listen to him all day long. I can tell you that some of my favorite cyclists (past and present) are NOT Lance Armstrong or Greg LeMond (though they’re pretty cool), but rather Laurant Jalabert, Djamolidin Abdujaporov (only because I love how Phil says that), Mario Cipollini (Hey-ooooooooh!), and of course, Big George Hincapie. 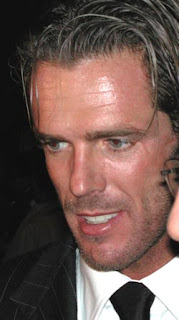 Reflect for a moment on Mario Cipollini, would you?

Now, where was I? I totally lost my train of thought. Oh yes. I’m not crazy for biking. Well, with gas prices climbing faster than I-don’t-know-what, I’m just done. Why not ride the bike more often? Not only is it FREE, but it will indeed save me some money and there’s an added bonus: I don’t normally exercise on work days. My body could use this shake-up.

A couple weeks back, the whole fam did the ride to the salon, to check it out. I can take the Prairie Path almost all the way there, get on a road for about 1/2 mile, and then ride on a sidewalk right to the salon door. Perfect. It’s about 9.75 miles, which some of you may be fainting at, but it’s not a big deal (to me). That must be where my group cycling classes help me out! The best thing is, the bike ride will take about 40 minutes at a leisurely pace. My car commute? About 20-25! Not such a bad time investment!

After discussing my plans in depth, Jim and I decided that if I can ride to work, we could also ride to the grocery store on occasion if we only need a few things. Our store is only about 3 miles away. Jim started to investigate a bike trailer to carry groceries on, but I put the brakes on that one. I’m not doing a major grocery trip by bike. However, I need something. I have to carry the following with me on work days:

I don’t want to carry a huge backpack while riding: ICK! I looked through one of Jim’s many bike store catalogs for a rack and a bag to place on top of it, and then the best thing happened. Jim came home a couple of days ago and remembered that when he had the long commute, he had just what I am looking for now. Did he still have it? Of course he did! His old bag (about the size of a big shoebox but twice as tall) will be perfect. The rack was right next to it, and he will attach it all to my bike this weekend.

I will ride to my old health club to teach my Saturday class, instead of driving there. Total mileage per day/week? 14 miles.

If I stick to this plan, the following will happen:

*I will be riding my bike about 324 miles per month.

*I will save almost $70 per month in gasoline.

*As an added bonus, I’m hoping to leave small pieces of my hips, butt, and stomach on the bike trail. I project that I will lose some good inches doing these endurance rides.

*Lastly, I just may like this bike-commuting thing enough to do it indefinitely!

I’m excited! Cheer me on, would ya?