The older boy was not the only person in our family who had a milestone kind of day yesterday. The thirteen-year-old was excited to be able to check off another item on his Summer To-Do List: “Get an electric guitar”. Naturally, since I told him that he couldn’t get one until summer, when being distracted away from homework wouldn’t be an issue, he was asking to go to Guitar Center almost immediately after school let out. He has been saving his pennies (and his allowance and his monthly hot lunch allowance) for a while now to make this monumental purchase. He had one picked out already, at the music store where he takes lessons (he bought himself an acoustic guitar about 18 months ago), but I wanted him to do further research and check out many guitars in his price range, rather than pounce on the first one he laid eyes on.

On Saturday we went over to Guitar Center, and boy was that an overwhelming experience. They were super-busy, and noisy with many guitars being “test driven” all at once. They stock hundreds of guitars in all colors, shapes, and of course, price ranges. I loved looking at them as a Big Picture all over the walls: 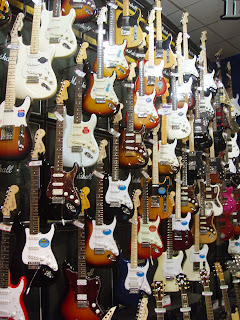 He found a couple that were within his price range, and planned on getting the amp at the other store. Then I had to burst his bubble a bit by bringing up the fact that a protective guitar bag was more important than an amp if he couldn’t afford both right now. (He can plug into an amp at his guitar lessons) He will have to save for another couple of months to be able to purchase the little amp he wants. We checked out the bags and then left so he could sleep on it.

Yesterday after I dropped the older one off at the temple to set up the chuppah, I took the younger one back to the guitar store, as promised. He picked up the guitar he was pretty certain about and test-drove it again. I decided to take video, because whenever you see a successful superstar on tv, there is always video evidence of them doing whatever they are now making millions from, as a child.

So, knowing that, this video could very well mean much more than it currently does, someday:

The happy boy outside, just after purchasing THAT guitar: 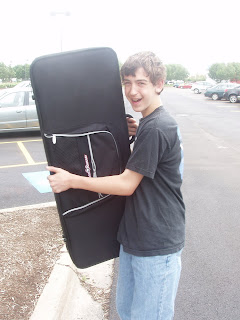 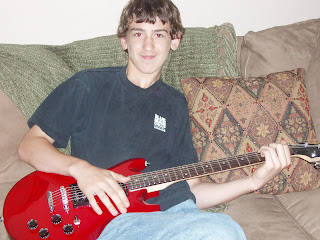 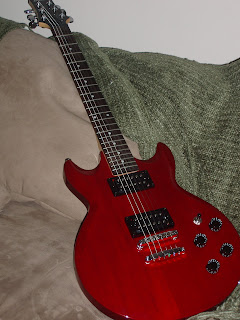 Much to everyone else’s dismay, I’m looking forward to his getting an amp, so he can play the songs he’s learned so far for us: “Freebird” (seriously!), “Rock & Roll All Nite”, and “Smoke on the Water”. Should be a very musical summer!

Next post: Yes, We Wanna See You Do The Shimmy Again