Fourth Out of How Many?

In high school, I met one of my most favorite people in the world, Kate. Actually, we met in eighth grade when she came to my Sunday School class with one of my classmates, whose house she had stayed at the night before. Kate remembers meeting me that day, and I have no recollection of this life-changing event. (What else is new? My memory…eh, she’s not so goooood.)

We re-met in high school and became pretty good friends in Junior year. We double-dated to Junior Prom, had sleepovers, the works.

In Senior year, Kate–being one of the smartest people I’ve ever met (Still!)–finished her high school requirements a semester early and started college in January 1986, so we didn’t see much of each other. By the following fall when I left for college and got married that December, we had let our friendship become a thing of the past for the worst reason: None at all. We just got totally lazy about keeping in touch.

Fast forward to 1994. I was pregnant with the younger boy and thinking about Kate, as I did quite often over the years. I decided that I would send a letter to her parents’ house after discovering that they still lived there. It was one of my best decisions. Her parents delivered the letter to her, and we’ve been tight again ever since! Kate always makes the same comment on each and every visit (we see each other in person anywhere between 1 and 3 times per year): “What I love about us is that we haven’t been together in a long time, but it’s always just as if it was yesterday because we pick up right where we left off.” What I love is that she makes that comment every time I see her!

The funny thing is, our lives couldn’t be more different. While I got married right out of high school and then finished a four-year degree but didn’t do anything with it and then gave birth to two bouncing baby boys, Kate stayed in school and eventually got her Ph.D. (no surprise to me!) She has worked full-time since then, and her and her husband ended up waiting to start their family for a while.

When my boys were young, I was a little jealous at times, talking to Kate when she was just at home relaxing (in peace and quiet) after work. Her house was just lovely, with its magazine-worthy decor and lack of toy clutter. Kate came for visits and, though patiently taught the older boy how to tie his shoes and had hilarious conversations with my two cuties, was easily exhausted because of her still-childfree home. (I found this hilarious) While she could pick up and travel at a moment’s notice, that was just a fantasy to me.

When Kate and her husband started getting serious about getting pregnant, my boys were well beyond making their own breakfasts. Kate and I spent lots of time on the phone, her wondering if it was the right time and how good of a mother she would be and me reassuring her that there isn’t a perfect time and of course she would be great.

And then it finally happened. They had a daughter in 2004. For the blog, I’ll call her Bean, since that’s what they call her. Oh my goodness, did things change when Bean was born. It was funny for me to see Bean’s Mommy and Daddy change practically overnight. They are awesome parents who dote on this little girl like crazy.

I enjoy being a resource for Kate: an advisor, cheerleader, analyst, whatever she needs, I’m it. It is fun for me now that the tables are turned. Where Kate’s still lovely family room is completely a Toy Zone now, my kids are getting rid of most of their toys. Now Kate is the one who is interrupting ME on the phone to tell her child something, or to put her child on the phone with ME for a minute. Now I’m the one who gets to do a little bit more relaxing while SHE is running around after an active toddler. Hilarious.

In 2006, Kate asked me to go to Europe with her, Bean, and her husband. She said she didn’t want to walk around Liverpool and Dresden alone with a two-year-old while her husband was at his convention, and wanted me to help her take care of Bean. How could I say no to such an adventure? So off we went.

I think I had a calming effect on the three of them for that trip. I kept Bean entertained as much as possible and we roamed around those two awesome cities each day, experiencing great new things together. Here are some of my favorite photos from the trip: 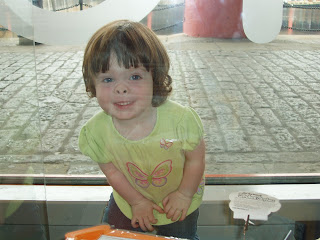 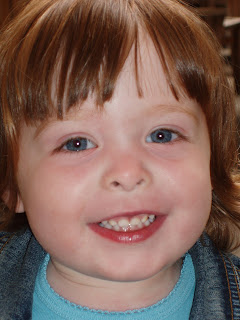 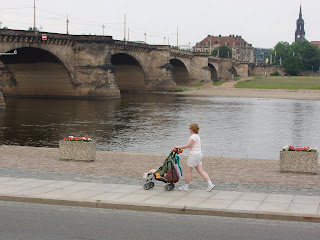 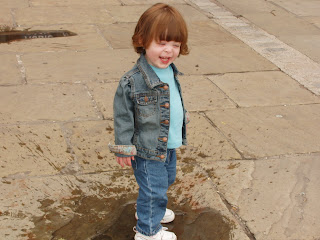 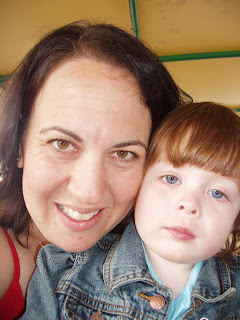 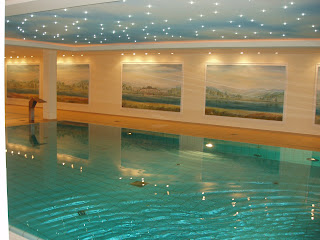 Near the end of our stay in Dresden, the truth came out about why I was there. Kate and her husband had an argument before dinner. He was torn because his co-workers (also there for the convention) were having a group dinner and gathering afterwards and she didn’t want to go. The four of us ended up going to dinner at a lovely outdoor restaurant (the same one where his co-workers were meeting after a while) and the tension was thick. Afterwards, I put Bean in the stroller and took her for a walk so the two of them could kiss and make up. I mean, fighting, on a trip to Europe? You’ve got to be kidding me. After a time or two around the block, she found me (he stayed with his co-workers) and thanked me for giving them that time to talk about it. It was all fine now, but she still wasn’t planning to hang out with that group, and I tried to convince her to do it. I finally said, “You know, I’m here to help take care of Bean…really, you should go!” She looked at me and said, “No you’re not! You’re here for ME!” It was funny, surprising, profound, and so true. And I will never forget it. That trip and the time spent with Kate and Bean (and Kate’s husband) will remain one of the outstanding memories of my life.

Although Bean won’t remember the trip (especially throwing up her hot dogs all over me in that pool in the last photo: that’s a story for another day…I have never laughed so hard after being puked upon), I always will. I love her as if she were my own daughter. I have already told Kate that it will be Aunt Melisa who gets Bean her first American Girl doll.

Kate and her husband are going on a trip this week for seven days, and leaving Bean at home with Grandma and Grandpa. They are very nervous about leaving her for that long and I have had several conversations with her, attempting to convince her to “get over it, she’s almost four”. (Spoken like a mom with teens, right?) Earlier this week, Kate called me and left me a voicemail. She said, “I just wanted to let you know that in case something happens to us on the trip, you are fourth in line to take care of Bean. I’m hoping that’s okay; if not, let me know.”

I returned her call the next day and left a voicemail.

“I’m fine with being fourth! Whatever you need, I’m here for you.”

Next post: Sixteen! Whaaat? But I Was Just Sixteen!