Creative Parenting 101: Discipline Can Teach a Lesson AND Be Entertaining!

When the older boy was approaching seven years old, I started to notice that he was taking certain things for granted. It was really ticking me off, so I discovered (either in a magazine or on tv, can’t remember exactly) what I thought at the time was a really great idea…and now I can say it was Pure Genius.

I made him start a “Thankful Journal”. Each day, I had him write about two or three things that he was thankful for in a blank book that I had purchased especially for this purpose. It made him think, it gave him much-needed writing practice, and gave us great conversation starters.

Now, you might be thinking to yourself, “Isn’t that a little young for that kind of mandatory activity? For a kid that age, that activity could take a really long time.”

You don’t know me very well, do you?

Of course I don’t think that’s too young! And if it takes a long time, well then who cares? It’s not like a six-and-a-half year old has Prom plans or a job to go to, right?

Anyway, as you can imagine, the boy wasn’t too crazy about the idea. On some days, after he got used to it, he rolled with it. I told him that he could illustrate some of the pages, too, and that got him a little more excited.

Occasionally he didn’t have anything “new” that he wanted to write about in regards to his level of appreciation. Fine. I told him to just write about something that had happened in his day. On a few occasions, he wrote about getting in trouble at school. You’ll see one of those pages in a minute.

After about six months, for whatever reason, we stopped keeping up with the Thankful Journal. I can’t remember why but it really doesn’t matter. I am very happy to report that my kids are very thankful and appreciative about most things in general. In fact, you know those chicken commercials where the kids stand up on the chair and make a grand production out of thanking their mom for making them the chicken for dinner? My kids actually–without standing on chairs–regularly thank me for things like making dinner, or getting them the kind of cheese they like to eat, or for finding something they had been looking for. You get the idea. I can’t say that the Thankful Journal was completely responsible, because I didn’t do it with the younger boy and he is still an appreciative person…but I think it had to help!

Now that it’s about nine years later, I pulled the Thankful Journal out and showed it to the older boy. He was acting very embarrassed about it, especially when I read him what he wrote in a John Lithgow-y dramatic way, but we had some great laughs. My advice to all of you out there with little kids? Have them do something like this! If not a Thankful Journal, then a homemade photo scrapbook where they write their own captions (we did this too), or a blank book full of drawings with captions, or something like that. Put these creations away with your other treasures, and pull them out in ten years. You’ll be SO happy you did it. And after all, childhood only comes around once!

Here are some of my favorite pages from the Thankful Journal. Because I love my readers, I will translate for you, beneath each picture. Enjoy! (Also, note how he, on the first few, “indexed” his pages by writing a two or three word summary of the page at the bottom! I love that!) 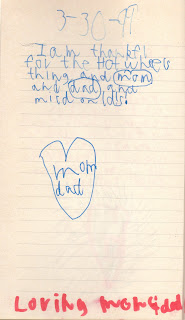 3/30/99: I am thankful for the Hot Wheels thing and mom and dad and McDonalds. 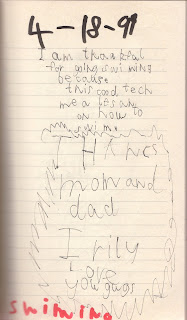 4/18/99: I am thankful for going swimming because this could teach me a lesson on how to swim. Thanks mom and dad, I really love you guys. 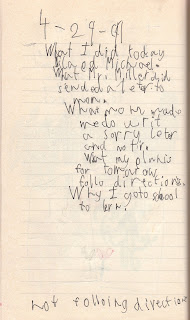 4/29/99: What I did today: Slapped Michael. What Mr. Miller did: Sended a letter to mom. What mom made me do: Write a sorry letter and no TV. What my plan is for tomorrow: Follow directions. Why I go to school: To learn. 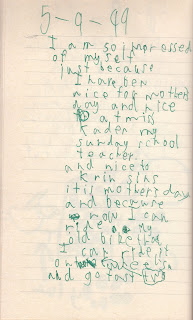 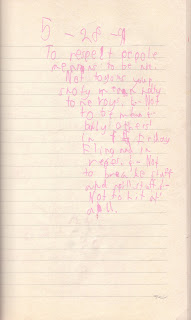 5/28/99: To respect people means to be nice. Not to use your snotty mean tone voice. To not to be mean and not bully others in Friday Fling and in recess and not to break stuff and not to hit stuff at all. 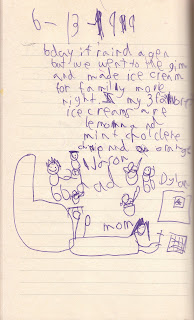 6/13/99: Today it rained again and we went to the gym and we made ice cream for Family Movie Night. My three favorite ice creams are lemon and mint chocolate chip and orange. 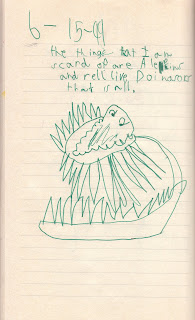