Oh, hi there. Welcome to Part 2 of Melisa’s Excellent Adventure. What? You didn’t read Part 1? Well, slow down Mister. You’ve got to do that first. Click here.

After the CAF River Cruise, I headed across the Michigan Avenue bridge to the Tribune Tower. 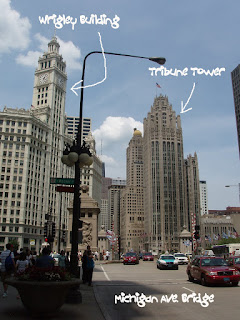 I was on my way to the McCormick Tribune Freedom Museum. As I approached the building, I saw something that caught my eye. The outside walls of the building were dotted with elements of different shapes and colors. 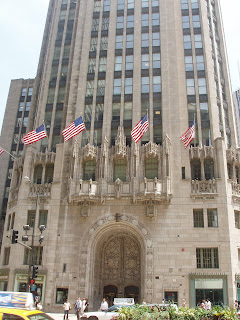 Now, I have passed this building countless times on countless trips downtown over the years and never noticed this. Upon closer inspection, I discovered that these elements are pieces of historical buildings and other structures that they cut the building stone for and then cement into place (after a 10-year wait, I read in the brochure, to make sure their historical credibility holds up)! This was so exciting to see! 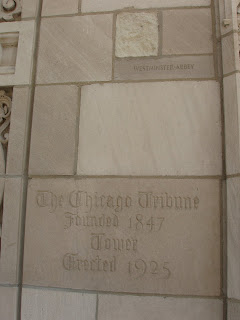 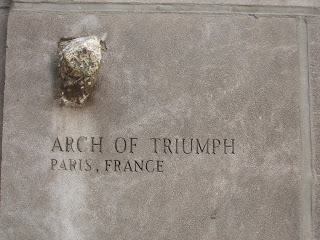 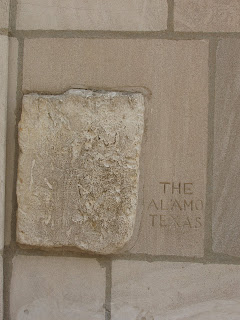 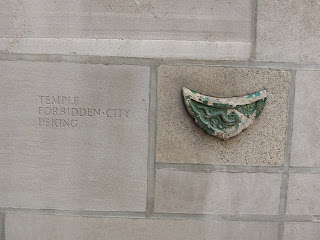 After that thrilling find (and about 20 minutes and 25 photos later), I headed in to the Freedom Museum. By the way, if you’re a local, you’ll be interested in knowing that admission is free at this museum EVERY DAY (how often does that happen?) until November 9. 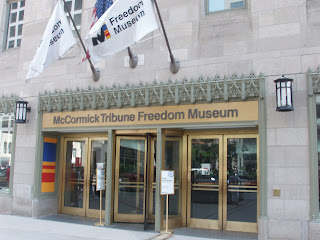 As you would expect of a museum sponsored by a newspaper and called the “Freedom Museum”, this was a great place to learn about the First Amendment and Freedom of Speech, as well as the other freedoms we take for granted. It’s a small museum that had many interactive exhibits, and I found it very informative. I was able to see everything in about an hour.

I even saw Justin Timberlake there. Really? Well, not in person. But the most amusing moment for me in that museum was when I discovered this exhibit: 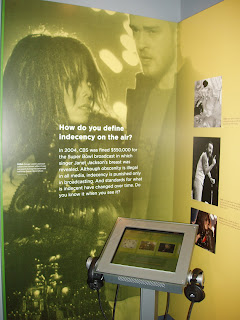 If you’d like to read it, you can click on the photo to enlarge it. It starts with “How do you define indecency on the air?” I wonder if Janet (Ms. Jackson if you’re Nasty) knows that there is a museum exhibit about her breast.

By the way, a shout-out to the late George Carlin, who is also featured in that exhibit (see him, to the right of Justin?) for his “Seven Dirty Words” routine.

On the way out, there was a great exhibit about what you would go through if you were running for President of the United States (the staff you would need, the issues you’d have to cover, etc.) and right before the museum exit you can vote in their unofficial election with a little poker chip that you get when you enter the museum. As you can see, Obama is slaughtering the competition in this unofficial election: 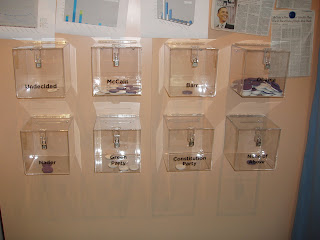 On my way out, I stopped at the desk and asked the girl there for a lunch suggestion. It was a little before one by this point and I needed to eat. I told her that I didn’t want Subway or Corner Bakery, because I can eat that in the burbs. I wanted a sit-down place that was reasonable. I was horrified that she couldn’t name off any place for me to eat that was in the area; she was just giving me suggestions that were at the other end of the Mag Mile, and I wasn’t headed up that way. I thanked her anyway and decided that what I needed even more than food at that point was sunscreen, since I would be outside for a couple of hours after lunch. I walked across the street to Walgreens and bought some, and then went outside and applied it liberally (it was too late for the burn but I had to put something on!)

Much to my delight and surprise, I stepped back onto the sidewalk in front of Walgreens and saw this: 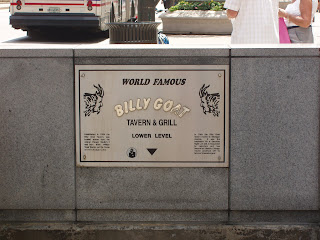 Are you kidding me??? The Billy Goat Tavern??? I have been wanting to go there for YEARS, and here it was, presented to me like a Hanukkah gift.

What? You don’t know what the Billy Goat Tavern is? It has historical significance for many reasons, but outside of Chicago it is best known as the inspiration for this:So, to the Billy Goat I went! 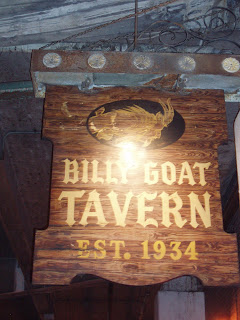 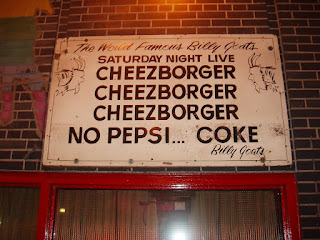 By the way, in reverse of the SNL sketch, now it’s “No Pepsi…Coke.”

I have to say, the experience was very fun and very much like SNL portrayed it. People were yelling “Cheezborger” and all that. Here’s how my order went:

The guy behind me, when ordering, smiled and said to the counter guy, “Can I get fries with that?” Of course the response was “No fries, CHEEPS!”

I found the next two videos on Youtube. (What did we ever do before Youtube?) The first one shows you how the tavern is below Michigan Avenue.

The second video shows you Sam at the Billy Goat. He’s much louder in person, but this will give you the flavor:

By the way, the Double Cheezeborger was fabulous! After lunch, it was time to go back upstairs to Michigan Avenue and head south, to Part 3! Click here!