The kid’s birthday this weekend was low-key, which is just how we like it. We mainly just went out to dinner and gave him his gifts. That’s partly because we had the “big celebration” LAST WEEKEND.

The reason we had to celebrate one week early is because he wanted to see Blue Man Group (again) for his sixteenth birthday, and I bought tix for the 14th of June. It was the four of us plus Aunt Julie, and the Birthday Boy was allowed to bring one friend. Of course he chose this one, because they’re pretty tight.

We went to dinner before the show, at Ed Debevic’s, which is a 50’s diner-style restaurant in which all of the staff is dressed up and in character, and everyone is really rude to the patrons: on purpose. 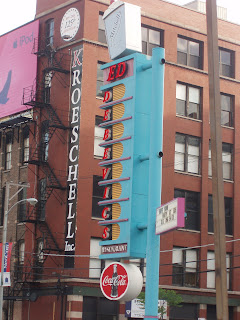 This lovely server was not there when we were, but I found her online and wanted to give you an idea of how they dress. They all choose a “character”; they are not all dressed alike at all. One guy had a homemade “Tesla” shirt on, and one guy was dressed sort of like a lifeguard but with an inflatable duck around his waist and flotation aids on his arms. 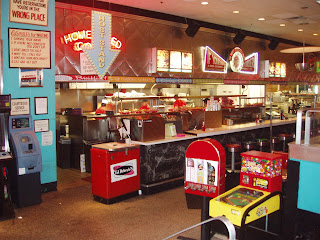 Nice view of the counter and kitchen. Every 30 minutes or so, the servers jump up on the countertops and dance to YMCA.

This place is so much fun, I can’t even express it in words. If you haven’t been to a place like this, I highly recommend it; it’s a great time.

I have to say, this particular visit was the most fun we’ve ever had there. Usually when we go, the staff is only moderately rude/funny/snarky…some more than others. On this visit? They were ALL “On”. We laughed practically from the time we walked in until the second we walked out the door.

A few examples of the staff, in character:

1. When we were being seated, a server was coming our way and we couldn’t all easily fit down the aisle. He yelled, “MOVE!!!”

2. The party at the table next to ours was made up of about 6 women and 2 men…something like that. Their server made an obnoxious comment about how they came in from the burbs (read: snobbier than city-folk), and later their server walked up to the table as one of the women was saying something to him (we didn’t hear it). He screamed, “Hey lady, I don’t come out to YOUR job in the suburbs and tell YOU how to clean YOUR house…”

3. When we were seated, our server asked us if we had been here before. I said that we all had except for my son’s friend. The server looked at J and said, “I’m gonna tell you how it’s gonna be. I’m going to be really rude to you and you’re going to deal with it. Got it?”

4. After a large group of older folks (yes, older than us: LOL) were seated in a party room, we noticed a server leading one of the older ladies (I think he had his arm around her) towards the restroom. He was gesturing grandly at the sign that said “Restrooms” and then when she went in, he turned around and came back our way saying, “Cha-ching! I’m retiring early, folks!”

But the best moment came after our food was served. The Birthday Boy was trying to pour the mustard on his burger, and it wasn’t coming out of the bottle. Each time this has ever happened in his life, I have tried to explain to him that he will wait forever if he just holds the bottle upside down and doesn’t actually do anything. (Cue the music: “An-ti-ci-paaaaa-tion…”) He never listens, and I try my best to keep my mouth shut, but on this occasion I needed the mustard! I got the bottle from him and pounded on the bottle a couple of times to get what I needed out. Then I gave it to Jim, who did the same. Jim may have given it to Julie, and then it ended up back with the boy, who proceeded to sit there for another minute with the bottle upside down. If I recall correctly, he was concerned about “breaking the bottle” by smacking it.

Finally, he set the bottle on the table and grabbed a new straw. He decided that it would be a good idea–NOT to suck the mustard out of the bottle, don’t worry–to sink the straw into the bottle and cover the top of the straw with his finger, keeping the mustard inside the straw until he could get the straw over his burger, release his finger from the top, and allow the mustard to drop out. (I would have just grabbed a knife and pulled mustard out that way, but kids…you gotta let them figure some things out on their own…)

At the moment when he was trying this little experiment, our server came up to our table screaming, “WHAT ARE YOU DOING???? WHAT ARE YOU, STUPID OR SOMETHING?”

That, combined with the look on my son’s face (BUSTED!), was just too much for me, Mrs. Mouth Full of Cheeseburger. I started the uncontrollable, watery-eyed, I-May-Choke kind of laughter. Don’t get me wrong. Under normal circumstances I would not be thrilled with somebody calling my kid stupid. I don’t ever call my kids names like that. But the combination of events that led us to that moment was just a piece of comedy in my life that I will never forget.

Our server continued his tirade. “What are you, an IDIOT? You owe me one mustard. I’m CHARGING you for that mustard!………STUPID!” 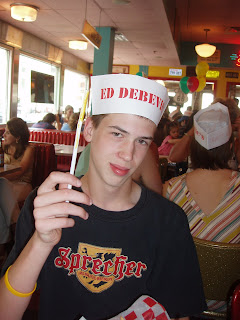 Here he is, shortly after his fall from grace.

Seriously, you probably had to be there. But we laughed about it all evening and still do re-enactments for a good time.

After the hilarity that was dinner was over, we headed over to the Briar Street Theater for the main event, Blue Man Group. Jim and I have seen it six times, Julie has seen it four times, and I think this made three for the kids. We’re done again for a while. Nobody should spend that much money on one show. 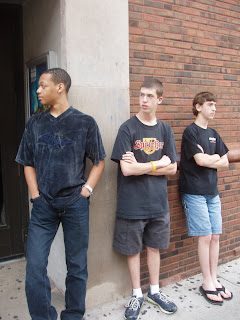 I adore this photo. Look how totally cool these boys look, waiting outside before the House was opened up for seating.

I can’t say much of anything about the show because I think there’s a Law against Blue Man audiences trying to explain the show. (It’s quite different; best if you see for yourself) What I can and will say/write is:

1. We sat farther back than we ever have: 3rd row. (We, especially Jim, are groupies or something and have always sat in the 1st or 2nd row!)

2. The 3rd row is still in the poncho section. (From wikipedia: Blue Man Group is…noted for having a “poncho section” of the audience; in the front rows, audience members are provided with plastic ponchos in order to protect them from various food, substances, paints, and so on, which are thrown, ejected, or sprayed from the stage.)

3. Julie and I needed the ponchos.

All in all, a very Happy Birthday Celebration! 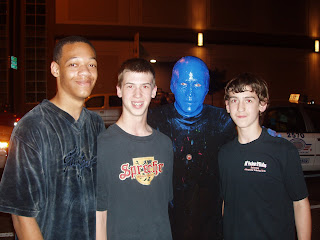 Previous post: Sixteen! Whaaat? But I Was Just Sixteen!