Though Our Team Ran Like a Well-Oiled Machine Only At Season’s End, THIS Machine Worked Properly On Day One

Lacrosse season is over, and now it’s time to turn LAX into RELAX. (Whew!) Although our JV team finished the season in last place with only one win, the final two games were proof that over the past 10 weeks they finally learned how to work together. The difference from their first games was night and day. I absolutely loved watching the games, and the fifteen-year-old not only learned alot but had fun, too. He had a great attitude about their record, and just kept trying his best.

I videotaped two games, but the fifteen-year-old is not thrilled that I’m even showing them to the grandparents eventually since they were losses, and that in addition to the fact that I haven’t yet edited anything made me decide to just throw a pro video clip on here so you can get a taste of the game. This is the Chicago Machine, the pro team for our area.

Though we still have a banquet to attend in two weeks, our final game was yesterday. Today, a bunch of the Varsity and Junior Varsity boys (along with some parents and siblings) went to the season opener of the Chicago Machine. Jim had a Boy Scout thing he had to take care of for their high adventure trip this summer, so the boys and I headed off without him to Toyota Park to enjoy the game. 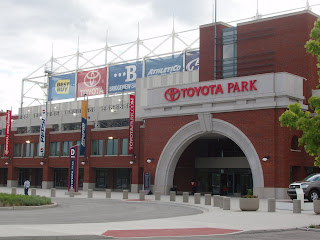 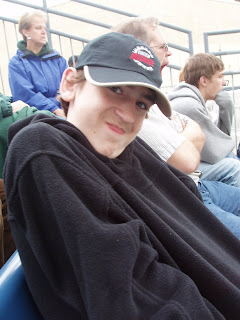 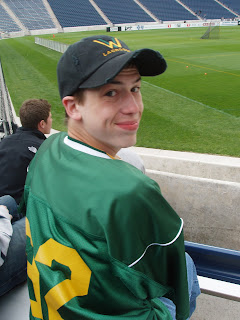 I sat in front of the Varsity Coach, and that was awesome. He still plays Club Lacrosse (goalie) and is very involved with the Machine; he has had some of the players come out to do workshops for the high school boys. During this game, it was fun to hear him “coaching” the Machine from his seat in the bleachers:

“Get moving, get moving…” 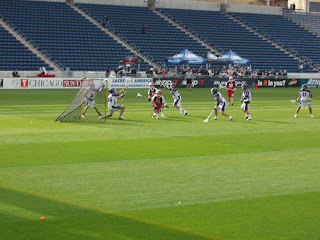 At halftime, the boys ran from their seats to raid the snack stands. As soon as they were out of the area, the Chicago Machine Dance Team came onto the field! (Figures, the teen boys missed them) Who ever even knew that Lacrosse teams have dancers??? 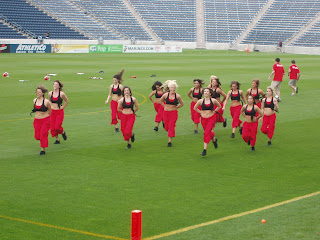 Although the high school games are more fun to watch, in my opinion (it must be the violence factor or something!), this game was awesome as well. We played San Francisco and won, 10-9.

I have never been a big sports fan, unless you count the Olympics. For those days, I’m a diehard. But now with Lacrosse, I have turned into a SuperFan. I don’t appreciate people trying to talk to me while I’m trying to watch the game. Strange noises come out of my clenched teeth when someone misses a pass or rams another player a little too hard. My hands are affixed to my face for the majority of the game. I pace like a caged tiger.

I love every minute of it.

If you have any kind of Lacrosse program in your area, amateur or pro, GO SEE IT. It just may change your life!

Next post: You Could Quite Possibly Add This One To The List of Differences Between Boys and Girls