What Do Frogs and John Belushi Have To Do With Teenagers, Anyway?

This post is a Public Service to you all out there:

One New Year’s Day morning, several years ago, my sister Julie and I were sprawled out in my living room, slightly hungover from our family (in-house) festivities of New Year’s Eve, the night before. (She smartly spent the night instead of getting on the road.) We were exhausted and not feeling much like moving. At some point, the current thirteen-year-old who was then about seven or eight, walked into the room and probably tried to have a conversation with us or something…that part I don’t remember. What I do remember is that he suddenly broke out into a dance where he acted like he had a top hat and, as he danced across the room, he repeatedly put his “top hat” on and took it off the whole way. There is no way I could possibly describe in words exactly what he did so you would be able to imagine it in your head as it happened, just like you won’t be able to get the exact tune he sang when I type

Anyway, since then Julie and I laugh about it on a regular basis. We call it the Michigan J. Frog incident, because that’s who he looked like when he was dancing. What? You can’t remember Michigan J. Frog? Here he is:

Little did I know on that day, when my younger son–the baby of the family–made us laugh so hard we were crying (and for a couple of years, put on the same show whenever we asked for it), that it was also an ominous foreshadowing of what was to come when Puberty hit him with full force starting at the age of twelve.

We should have expected the storm. After all, we do have an older son. Actually, when it happened to him, we referenced the son of our very good friends and former neighbors. This guy is now a senior in college and has grown into quite the young man. When he turned 14, however, he became a completely different person for a while. Jim and I referred to him (not to his face, of course!) as “the surly one”. We privately alternated between giggling about this sudden hormone boost that caused him to attempt to be disrespectful (I write “attempt” because dissing the parents was not allowed in that house, just like in my own) and dreading the puberty experiences of our own boys.

When the fifteen-year-old became surly about two years ago, we would look at each other over his head and nod, as if to acknowledge that we were on to him and the maturing that was going on. He became quiet and defensive about everything. He seemed to lose his mind, because he was forgetful about things that used to be no problem to remember, like feeding the dog or bringing his dirty clothes to the laundry room…or turning in homework (don’t even get me started on that).

Luckily, this older one is a talker. The three of us can sit and talk about just about anything, and although occasionally there is some squirming on his part, he braves it out and we have some memorable conversations because of it. In fact, as his mother, I was pleasantly surprised when he would come home from middle school and regale me with stories:

Why was I pleasantly surprised to hear this? Ask yourself this: how many teenaged boys do you know will be completely comfortable with saying the “M” word during a conversation with their mom? I rest my case.

When he brings up things like this, I take him very seriously. I give him respect, and I converse thoughtfully with him. I can ask him questions:

“Do you think ‘C’ really was confused about that, or do you think he was just trying to call attention to himself?”

or, on a different note,

So, by keeping the lines of communication open, being receptive to really HEAR what he was saying, NOT FREAKING OUT, and giving him respect, we are weathering the Puberty Storm with the older one quite well. He came out of the initial gust of hormones quite well. He’s still talking with us, his grades are great, and he’s really a well-rounded, hard-working, and thankful-for-everything kind of guy.

Back to the younger one. What was I saying before? Oh yes, we should have expected the storm. This Surly Storm, however, is a CAT 5. We are on DEFCON 1, for sure. Although this is our second time dealing with it, it is more difficult because this boy is not a talker. Rather than being comfortable talking about his feelings, he bottles everything up. We are attempting to be proactive about this because we feel like we have more of a worry with him regarding peer pressure situations that will inevitably come up in the next few years. Jim and I both try to create opportunities to talk with him without making him feel uncomfortable, and though we have been successful on occasion, haven’t found a recipe for success in this area. We have to remind ourselves that the older one was quite similar in his surliness, and that this one is just a little more challenging, that’s all.

This quality that he has makes this puberty thing very difficult and frustrating. In fact, he was quiet and to himself (mopey, one-grunt answers) yesterday morning as he often is. I had to take him over to the temple because a classmate was becoming a Bat Mitzvah. I tried my best to talk to him in the car, but he wasn’t going for it.

As we pulled up at the front door of the temple, he saw a friend of his and immediately perked up. “Hey! He’s here! Woo hoo!” (Or something to that effect)

He jumped out of the car, big smile on his face, and yelled across the parking lot to his friend. When his friend got to the door, they both walked into the building, laughing and joking around.

Then I thought of that New Year’s Day, years ago, and made an important realization.

He has become Michigan J. Frog.

With us or while doing “boring” things like feeding the dog, cleaning his room, doing homework, helping with dinner: 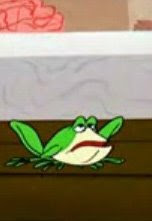 With friends or while doing something that interests him, like playing guitar, being outside, playing video games: 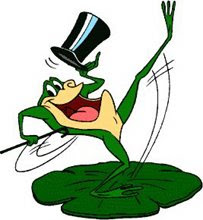 I was watching one of my favorite movies yesterday (“Animal House”), and one scene really hit a chord for me. I’m going to suck all of the inspiration that I can from it during this trying time. Nothing is over until WE decide it is.

Though times are currently difficult and frustrating, Jim and I will persevere. We became parents for better or worse and although this is bordering on “worse”, we know that we have been successful in making it through once and we will not fail on the second try. By employing the methods that we know (consistent parenting), we will make it through this storm only a little wet from the journey.