Celebrating Memorial Day With Thousands of My Closest Friends

Yesterday was Memorial Day, and we started it off the same way we have for the past couple of years: the two boys, along with others from their Boy Scout Troop, marched in our town’s parade, escorting the Gold Star Families (families who have lost a loved one who was defending our country at the time). I absolutely love love love our town’s parade. It takes place, as most parades do, in the downtown area. Thousands of people come out to watch, and it is just really charming. Our town has grown from a population of just over 100,000 when we moved here in 1995 to almost 130,000 now, yet I still see lots and lots of people that I know (both marching and observing) on parade day.

Jim is doing a big bike ride in Iowa in two weeks, so he had to skip the parade in order to train, so I went solo. After getting the boys to where they needed to be, I had to make one stop–to the candy shop so I could get my parade supplies: 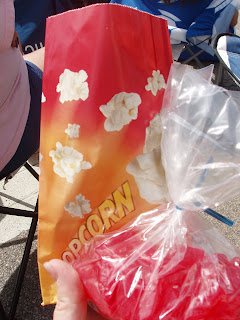 In addition to the popcorn and Swedish Fish, I grabbed a bottle of water and a pack of Skittles for each of the boys, for when they were finished marching. Then I hustled over to one of the main intersections in town and parked myself literally in the street, facing south. There were people everywhere you looked. 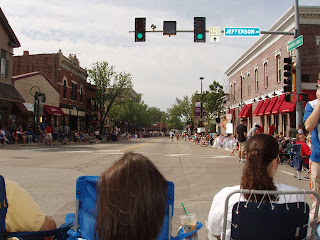 This is one of the few days you would ever hear parents yelling at their kids to go play in the street. The giddyness factor of those kids who at first thought they were doing something naughty but realized it was okay until the parade began was priceless. 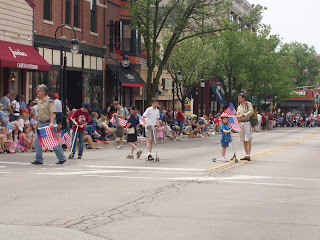 Then the parade started with a police escort, 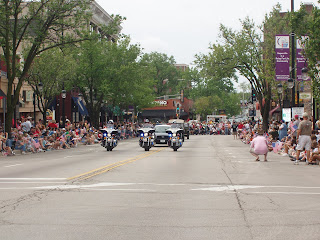 and then some members of the Armed Forces. This part is always a tearjerker for me, because as they walked up the route, you could see people standing and applauding wildly as they passed, sort of like a slow-motion “wave” like you see in sports stadiums. Soon everybody was standing and clapping, and I was crying: it was a beautiful thing. It’s so nice to see everybody being so appreciative of the people who keep our country free. 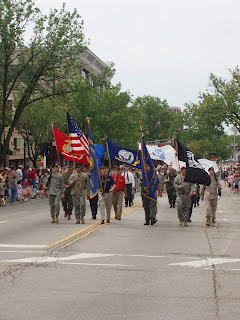 Our town’s municipal band came next, 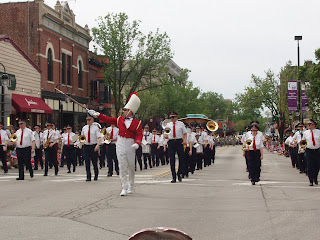 and of course no parade in our town would be complete without the trolley: 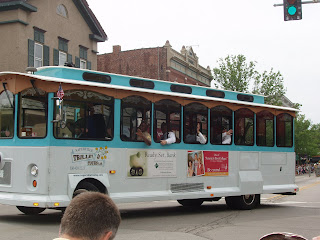 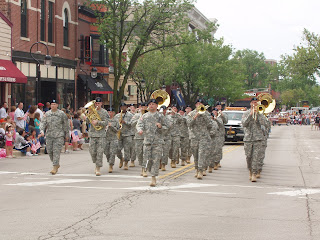 and then the boys from our troop appeared 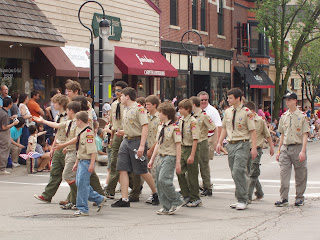 followed by Gold Star Families and Veterans in vintage cars. 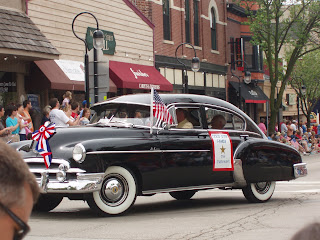 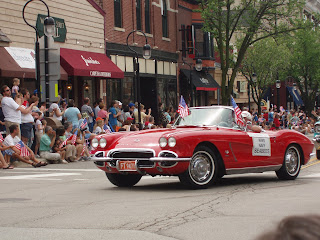 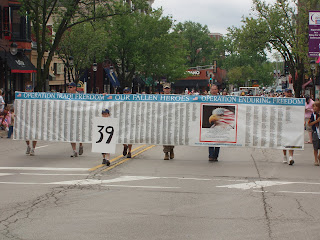 Each of the high schools and middle schools from our two school districts had marching bands in the parade, and they were awesome. Where I was sitting, I got a front-row seat to the high school bands doing that really cool turning manuever:

What a great time! I only had one complaint (surprised?): I was sitting right behind a girl (who was with her parents) who, I think, had just graduated from high school. She really bothered me for several reasons. For one, she was wearing shorts that were practically pornographic. They barely covered her lady parts (front and back) and she kept yanking on them everytime she stood up to stretch. I wanted to tell her to go put some clothes on, but that would have made me officially old, and I’m not ready to go there yet. Also, she had hair that was gorgeous, and I envied it: 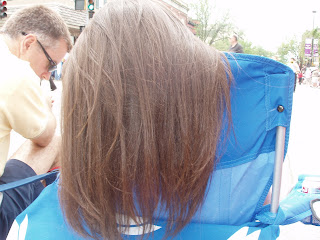 HOWEVER, every couple of minutes she had to run her fingers through it and sling it out, away from the chair, and…well, I took video:

That may not look so terrible, but imagine sitting right behind that, and that happening every couple of minutes for two hours. Ugh.

Don’t worry, I didn’t let it ruin my day!

After the boys finished their participation and found me after the parade was over, we walked back to the car and found something really cool: there was a yard along the way whose trees were full of bowling balls: 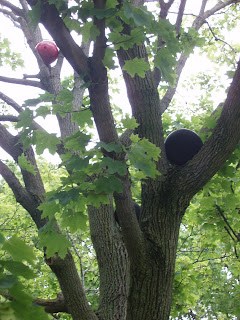 I have no idea why they did that (there were three trees that had the bowling balls up there)!

Anyway, it was a fun morning and we headed home to relax before starting part 2 of our day…(coming soon)

Next post: Oh, To Be Free To Eat What We Want…