Last week I received a package from my favorite German Evil Twin, Kat! (I love surprise packages, don’t you?)

Further confirmation that we are indeed long-lost evil twins came as I opened up all of the goodies that filled the box: all perfectly chosen. She sent me (okay, US…I shared with the family) some German chocolates from the area in Eastern Germany where she was born and raised (can I just say “YUM!”?). My favorite was the chocolate with Hazelnuts in it, which is a pretty common find in German chocolate: FOR A REASON. It’s delicious! Lucky for me, my family liked the other two candy varieties that she sent to us a little better.

She also sent an adorable black t-shirt that says “München” (Munich) in rhinestones with a rhinestone tiara over the word. Yay! 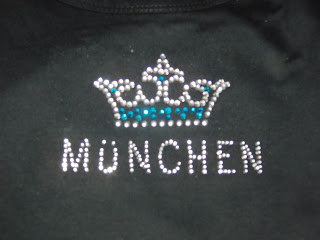 Jim’s favorite gift from the box was a beer stein from Oktoberfest 2007. Kat tells me that I have to get the Oktoberfest 2010 stein when we (hopefully) head on over there in 2 years. I’ll do that! 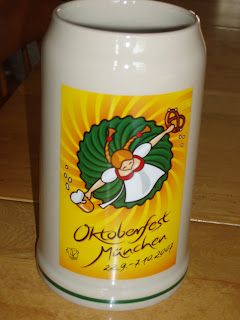 My favorite gift is as cute as a button. It’s a totally awesome miniature Lederhosen change purse! Look at it! 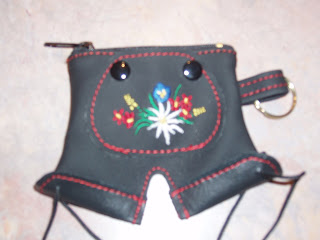 Kat also put some coins in it, to start my Europe 2010 trip savings. Great idea! I told her I plan to carry those little Lederhosen in my purse until they wear down to shreds.

Thank you SOOOO much, Kat! You made my week!