The Two of Us Were Up ALL Night Long. It Was Horrible.

And Jim was sleeping soundly.

That’s right, Roxie and I had quite the night. I ended up having to rush her to the vet this morning. She’s okay now, but a little out of it: 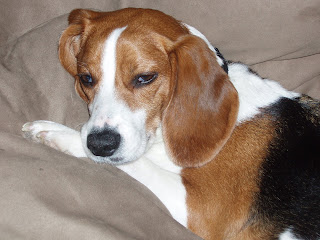 The sedation is still wearing off.

By the end of this post you can trust that you will be wondering why in the world I would write about this; in fact, I was wondering that myself as I was trying to think of a clever, interest-provoking title. But part of the reason people blog is to document the “ordinary”, and part of the reason people read blogs is to learn about what other people spend time doing.

So, let’s back up to last night around 9:30. I returned home from a scout meeting with the boys and shortly afterwards, Roxie jumped off the couch like something just bit her in the butt. Her tail was curled down (and between her legs) pretty tightly, and she looked a little distressed. I let her outside and she did her business, and when she came back in she didn’t seem to be relieved. I thought back to earlier in the day when I was at work and I called the kids at home (school was not in session) to see how things were going.

After I questioned further about the first two issues, I asked why Roxie was being a pain. Turns out that the fifteen-year-old was eating his lunch in the family room and the doorbell rang. He forgot that his paper plate was sitting on the end table and that it still had a little bit of Buffalo Wild Wings Spicy Garlic sauce on it. (He dips his grilled cheese sandwiches in it) When he got up, the dog pounced and the boy transferred his anger at himself for leaving the plate there, to the dog for doing what animals do.

So when she exhibited this strange behavior last night, I attributed it to the garlic sauce, figuring that it must be working its way through her system and she had a bit of intestinal upset from it.

We went to bed, and she just would not lay down in her bed for more than five minutes at a time; she kept getting up and walking around. She was just so uncomfortable. After more than 90 minutes of this, I took her downstairs and tried to settle us in on the couch. No luck. She wasn’t having any of this “Hey! Snuggle with me!” stuff. That’s how I totally knew that a vet visit was in her near future.

This morning, she whimpered a couple of times and was shaky. The vet was kind enough to fit us in this morning, so off we went.

I filled him in on the garlic sauce caper, as well as the fact that she was completely fine yesterday until last night. I told him that since she wouldn’t let us near her tail, I didn’t know if the problem was with her tail or her digestive system.

She completely freaked when he had his helper put her up on the exam table. He noticed that she was holding her head weirdly and checked her ears first. He totally found an ear infection in one ear. She was very upset by his ear-prodding, and they had to sedate her. Although it only took a second, it was hard for me to watch because they put the injection in the same area of her paw as our other vet did when we had to put Bijoux down. Icky feeling!

Anyway, to make a long story short, he discovered that her problem was something that I don’t want to type here because I can only imagine what kind of people will find me through a google search…so click here if you are “not easily offended”, as Perez Hilton would say. She didn’t have any of the scooting or the smell or anything (and she’s had minor problems with this in the past…we never even suspected it!) It gets “better” though. When the vet cleaned up the area, what he pulled out was a hard, marble-sized piece of…uh-huh, the stuff that’s in there. No wonder the poor thing was in pain.

(While I’m on the subject, can I just go on record by saying that I could never be a veterinarian? Bless our vets!)

We came home, I put her in her house briefly so I could get my foot rechecked at the podiatrist’s office (it’s coming along…), and then I came home for a nap with my little Roxie on the couch. The vet says she should be “perfect” by tomorrow. She’s never been perfect before, so we’re excited to see it! (Ba-dum-bum!)

So, that’s my exciting life for today!

Previous post: The Best Thing Ever When You Want To Count Your Blessings