Passing Down the Passover 4-1-1

Hello again, my little Jew Stuff students…it’s time to talk a little bit about the Jewish holiday that begins at sundown this evening: Passover. If you would like to read more detail than I will post here, go to this place and you can learn all about it. I am more interested today in writing about one of our favorite Passover foods than the historical significance of the holiday.

But since I’m here and you are all usually pretty receptive about learning, I’ll summarize. To make a long story short, Passover celebrates the Exodus of the Jewish people from Egypt, led by Moses. The name of the holiday comes from the part of the story where the Jews escaped the fate of the Tenth Plague, the death of each firstborn child, by putting some lamb’s blood on their doorway: the Angel of Death then PASSED OVER their homes, leaving their firstborn children free to live another day.

How does my family celebrate? Every year we go to the home of one of the families in our Havurah (“group”) from the temple for a seder. We have been getting together for most Jewish holidays with these five other families for about 11 years now. It’s been really cool to watch all of our kids grow up! Last year at Passover we were amazed at how we “suddenly” had all of these young adults sitting at the table, and Where The Heck Were All of The Four-year-olds??? Out of the 13 “kids” in the six families, there is only one left who has yet to become a Bat Mitzvah. One of the husbands remarked recently that once Julia becomes a Bat Mitzvah, we will start attending the weddings of the older kids. If that’s not enough to make a person feel ancient, then I don’t know what is!

Anyway, we are headed over there tonight where, for some reason this year, there will only be 10 of us instead of 25. (It’s rare that all of the people come, but we usually have at least 20…) Very bizarre. A couple of the families are headed out of town to be with Grandparents and other relatives.

My contribution to the seder is the same each and every year. I make the charoset. Charoset is an important part of the seder. It is one of the items that sits on the seder plate and symbolizes the mortar that the Jewish slaves used to put in between the bricks as they built the pyramids.

I can safely pronounce to the world that I make an excellent charoset. Ask my family, ask the people in our Havurah, ask my Religious School students…I’m sayin’ it loud and proud.

I SORT OF use a recipe from a book called Mama Leah’s Jewish Kitchen. I really take her recipe and run with it; first of all, I make a HUGE batch. Secondly, I don’t really measure the ingredients. I’ll put the recipe here if you’d like to try it. Honestly, it can be made and enjoyed any time, by people of any religion…I highly recommend it!

I will give you Mama Leah’s Recipe, and I will tell you what I do differently afterwards:

First I spend about 40 minutes chopping clean, UNPEELED apples into really small pieces. I use at least three different varieties of apples, because I love the color and the taste. I think today, my thirteen-year-old gourmet chef-wannabe helper and I used about 12 apples. I lost count: 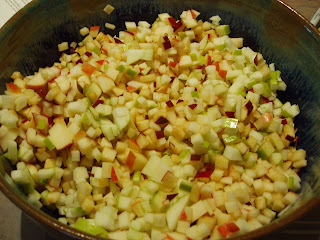 Add the lemon juice. Since I figured I used about 12 apples, we SORT OF tripled most of the ingredients: 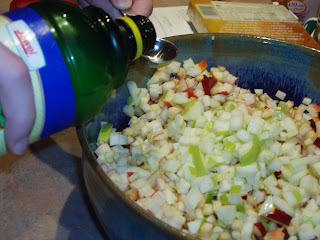 Don’t forget to give the four-year-old gourmet beagle some apples. She loves them. 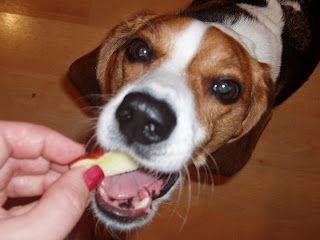 I cheated and just bought a 2 1/2 cup bag of diced walnuts. 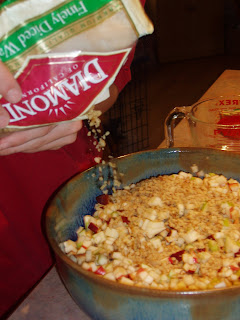 We added about 4 teaspoons of cinnamon: 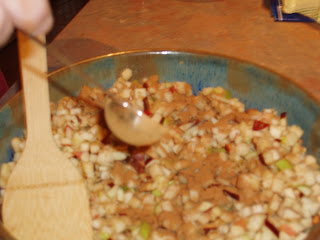 Okay, here’s where it gets crazy. Instead of choosing brown sugar OR honey, I add both! We threw in AT LEAST 6 tablespoons of brown sugar… 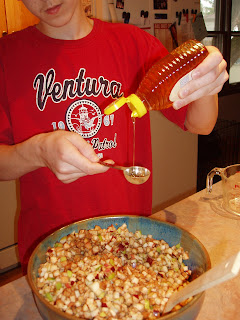 …and AT LEAST 6 tablespoons of honey. After the taste test I know we added more! 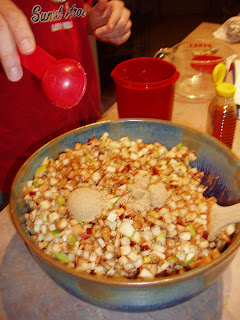 The next step is the wine. Wait, don’t drink it… 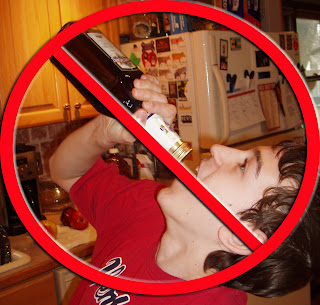 We used about 3/4 cup of Manischewitz. But you can just use grape juice too; it’s almost as tasty! 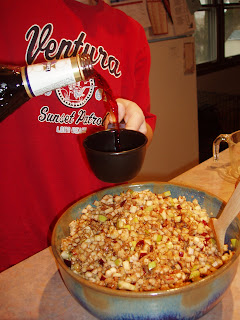 Mix that sucker up really good, and try it. It’s usually better after it sits in the fridge for a while so the flavors can blend (like salsa!). Add what you think it’s missing, and be prepared for people to want you to make it annually! 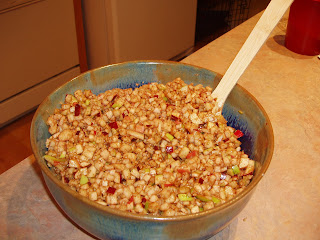 Have a great Saturday!

Next post: He Always Makes Us Proud, But This Is Ridiculous…