Just Like Being In Paradise…Without the Sun, Sand, or Threat of Shark Attacks

At long last, I am ready to post my vacation summary! Sorry for the delay: real life hit us hard upon returning home when I had a Wednesday full of group fitness classes (I subbed for someone in the morning and taught my own class in the evening), dentist appointments (for me and the two boys) and Lacrosse practice. But better late than never, I always say! And I think, when you see how hard I worked on this post, you’ll agree that it was worth the wait. And now, without further ado…

Just sit right back and you’ll hear a tale, a tale of a fateful trip…

The skies were always blue at Key Lime Cove… 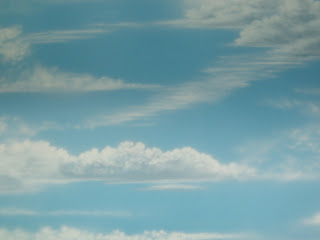 Here are some more photos of the scenery… 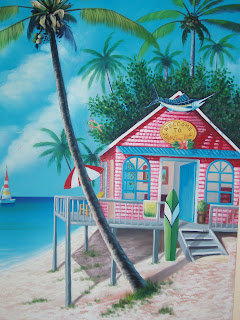 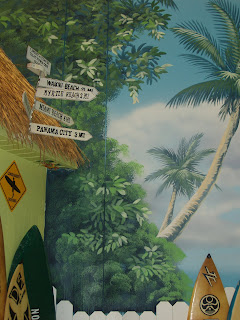 Just kidding. That’s just some of the great artwork that was all over the walls.

When we arrived at Key Lime Cove we were very excited about finally having a couple of days away. I stood in line for a bit to check us in: the place was hopping, for sure. When I was given wristbands for everybody (pretty standard for a place with a water park), I was excited to learn that our wristbands would also get us into our hotel room. What a genius idea! I loved it! But wait…it gets better. As the adults, Jim and I would be able to charge stuff to our room by scanning our wristband! How cool is that??

After check-in, it was time to go see what the room looked like. I always take a photo of any hotel rooms I stay in as part of my vacation pictures; I don’t know why. I told the kids what I always do: “Wait! Don’t put a thing down until I take some pictures!” The room was really bright and happy. I loved the décor…for a vacation room. It reminded me of Spongebob Squarepants, and I probably wouldn’t be able to live in that color scheme indefinitely! Here are the room photos: (we were in a Queen Deluxe room, which had two beds + a sofa bed) 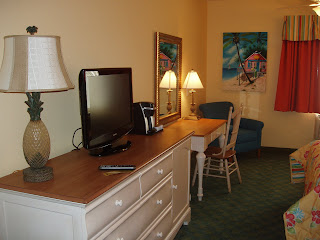 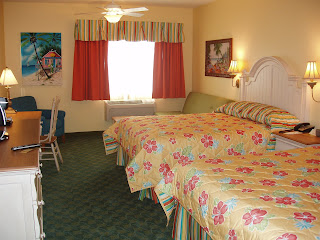 We (the kids and I, that is) also found the hallways really cool. (how many people pay attention to that???) They were painted in alternating colors. It was sort of psychedelic, walking down the hall! 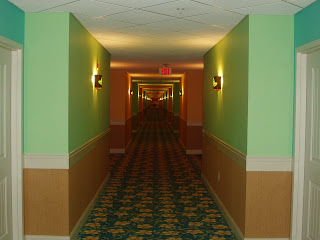 Due to the fact that the place had been only open for 3 weeks, you won’t be surprised to read that it was very clean. We really hope that, should we go back someday, we will see the same level of cleanliness. The place was crawling with employees, and they were all very friendly. Being the daughter of a career-hotel manager dad, I have always made a point of making eye contact with every hotel employee I pass, and I smile and say hello. The employees at some hotels do not respond or won’t even make eye contact: at KLC they were very, very nice.

On the main floor, where the Front DECK was, the resort designers recreated Duval Street in Key West. It’s a lively place with colorful storefronts (and real shops, too!); on the first night we stayed, there was a man who was showing us tourists his trained exotic birds. The fifteen-year-old even got to hold one, but the guy told him to keep it on the D.L., because the birds were still in training. 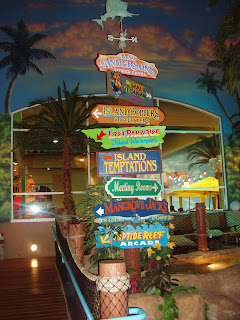 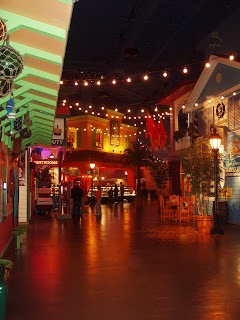 One of the shops was a Sweet Shop; they had a container full of the biggest jawbreakers I’d ever seen: Roxie would have loved them. 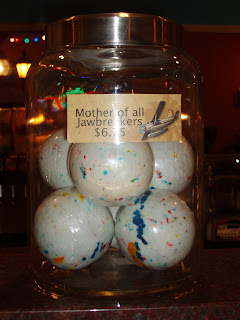 On to the water park! The use of color in this place was spectacular. We have been to a couple of other water park resorts; this one was very similar to Blue Harbor Resort in Sheboygan, Wisconsin (one of our faves) but it has a wave pool that was fabulous! I am currently irritated because I got video footage of the wave pool and the huge pineapple dumping water all over everything and everybody, and for some reason Youtube keeps giving me a failure message. You’ll have to pretend my photos are moving: 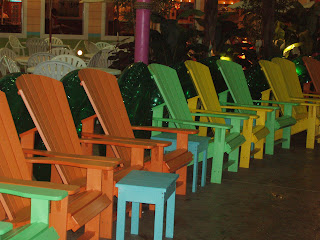 I loved the Adirondack chairs! 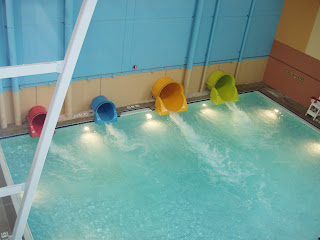 The red and blue ones are body slides (the blue one is TOTALLY DARK inside; you can see light through the red one. The orange and green slides are for tubes. They were awesome. (I prefer the orange one) 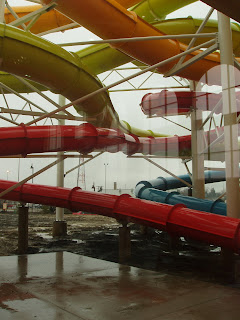 You never knew, while having fun indoors, that outside was a dreary, rainy day. Here’s a view of the four slides that twist and turn OUTSIDE of the building!

If you ever go, you’ll need to make sure that you try these slides during the day AND at night. At night, they are all pitch black, which makes it all the more exciting: I loved it!

And BY THE WAY, there are 69 steps that you have to walk up in order to get to the Hurricane and the other four big slides. So I still got a workout in!! Yay me! After the 8th or 9th time, yikes…

Can I just tell you this practically unbelievable story: When we went into the little snack bar to get some sodas, the girl behind the counter had a name that I just couldn’t believe: TIARA. I kid you not. In fact, I swear on the lives of both my children that Tiara was really the name on her nametag. I couldn’t make something like that up! Had a good laugh about it, too… 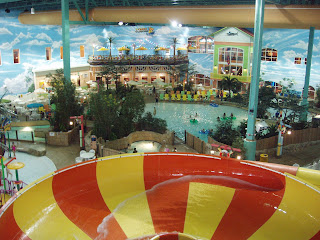 Here is an overview of the park. 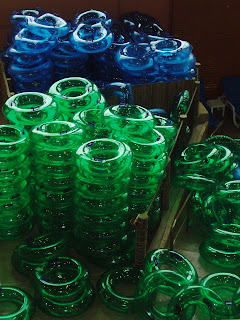 I thought this would make a nice photo. For those of you with toddlers, some of the two-person tubes have one hole and one “seat”.

I know that some of you wanted to know my opinion on taking toddlers to this place. In my OPINION, the parents of a 2-year-old wouldn’t have a relaxing time because of the constant supervision required: but that’s true of any activity you do with a 2-year-old, right? The water park is really big and I think that there is plenty to do with a toddler (there is a baby area that I forgot to snap a photo of…) but I think it would not be relaxing for the adults. I saw a bunch of wee ones throwing tantrums because they couldn’t go in their own individual tube (one of the green ones).

I know from my own experiences that once the kids got to be 4ish, trips were much more fun because there was less maintenance involved, but obviously others might disagree. I know that once your kids get to the age where you don’t worry about them in the water (and there are lifeguards EVERYWHERE), this kind of place is great because the kids can go off on their own. Basically I guess it’s just a personal decision! 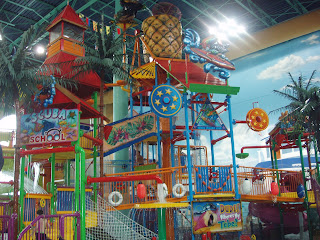 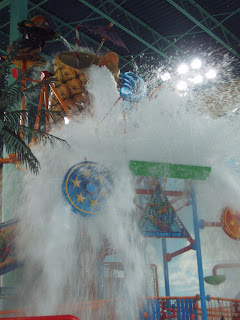 Here is the pineapple, dumping its water all over everybody. It happens every couple of minutes and is a blast. I wish Youtube could have made it possible for me to show it to you in action…

Another action piece will have to suffice. Here’s the thirteen-year-old on the Hurricane Bowl slide:

This slide was so much fun: a little scary at first, but fun! The lines were longer for this one. I actually got nauseated once! 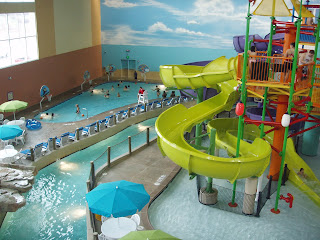 Here is an overview, taken from the top of the steps near the Hurricane Bowl slide. You can see the basketball pool in the far back, and the Lazy River… 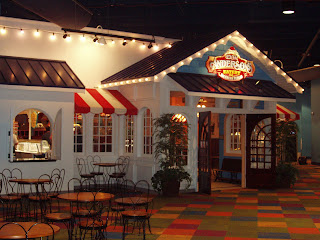 DW Anderson’s is just one of the eateries. Yummy!

The only complaint we had about this resort right now was that their food operations weren’t “tight” yet. It took entirely too long for our lunch pizza to cook at “Anna Chovies”, and the staff seemed to be confused. Also, I called the Front Deck to ask what time DW Anderson’s closed that night because we wanted to get ice cream. I was told that the restaurant part closed at 9 but the soda jerk was open until 10 for ice cream. Well, the water park closed at 9 so our plan was to go get ice cream after that. Besides the fact that tons of others had the same idea, what I was dismayed to find was that the soda jerk was only open through that WINDOW you see on the left. The line was enormous and there was no menu to be seen out there except for the ice cream flavors. When it was our turn, I asked if we could get a shake. The guy told me that they were doing shakes through the window, but not sundaes.

I said, “HUH? You mean we have to get ice cream with no toppings???” He said, “Well, if you want toppings I’ll do that for you. I actually think that rule is ridiculous.” I did too. It was very unorganized and not the ice cream sundae experience our family was looking for. They should have the restaurant side open until at least 30 minutes after the water park closes, in my opinion.

The other big draw for the kids was the arcade. Okay, for us too. We love Skeeball. As with all arcades that give tickets with game play, it was a ripoff for us, but one of those things you just have to do. “Fortunately”, the wristband system made it soooo easy for us to charge $15 in game tokens to our room! 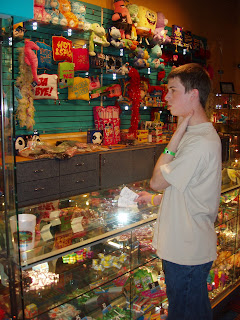 The arcade games gave out tickets, and here is the 15-year-old, shopping for prizes at the end of the evening. This place is a goldmine. 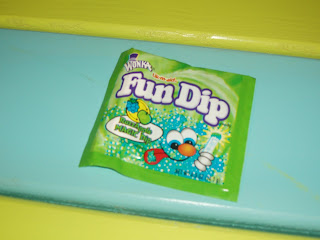 Jim and I were strolling around after playing Skeeball, trying to find another game to play that we thought would be fun, when we saw her.

Where they put all of the old games out to pasture.

Suddenly I was whisked away to my favorite decade as all of my mad skills came back. I played about four times before the thirteen-year-old asked me, “Why isn’t it giving you prize tickets when you’re done?” I just shook my head and told him that it wasn’t all about the tickets… 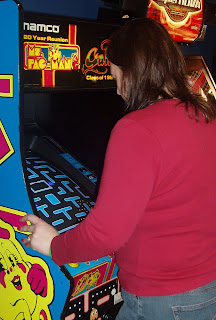 One funny thing that happened had nothing to do with the water park: 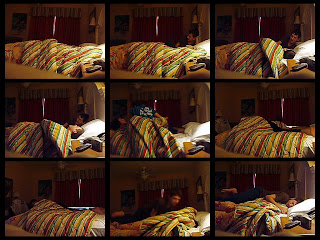 I have no idea how my camera took this photo, but it’s cool. This is the little wrestling match that happened in the morning. I have video:

Watch the thirteen-year-old try to attack his brother but then totally switch gears because Ashton Kutcher’s camera ad is on tv…and then he gets back to the matter at hand. Pay close attention to what he’s saying in the last 30 seconds. It’s hilarious.

All in all, a fun trip for everybody!

I hope I answered everyone’s questions! If not, leave your question in the comment section and I’ll answer it in a post tomorrow or the next day!

Next post: My Music Is Harder Better Faster Stronger