Trust Me, The Build-up Is Worth It.

The way we go about Parenting these days is very different from past generations; some of the changes were by virtue of necessity and some were just brought on by preference. Sadly, safety and “Stranger Danger” is a much bigger concern now than it was when I was a kid.

I remember, in the ’70s, happily walking with a friend (we were about nine years old) from our home on Bigelow Road in Park Forest, Illinois over to Park Forest Plaza, an outdoor shopping center (before “Malls” were being built). Alone. With no adult supervision.

I remember playing outside until well after dark, and my parents not having to worry that somebody was going to drive by and scoop my sister and me up, never to be seen again.

I remember walking to and from school, having to cross–with a Crossing Guard’s assistance–a major area intersection.

Nowadays, most kids don’t play outside for long once it gets dark. They aren’t going to the mall alone at the age of nine. And if there is a major intersection on the way to school, they’re either being bussed or their parents drive them when that’s possible.

I have to preface this next part–the punchline, if you will–with the fact that Julie and I have amazing parents and we credit them for turning us into the fine, upstanding citizens we are today. So let me continue.

…Being handed over to a complete stranger for a hilarious photo op! 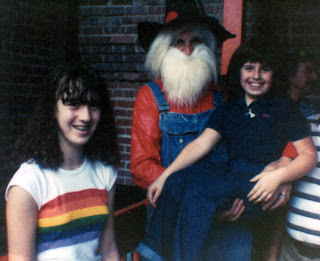 I almost peed my pants when I found this photo the other day, while looking for tiara-appropriate pictures. There are so many things wrong with it! Julie retouched it for me a bit because the color was a little off. Hold your cursor over the photo to see what she renamed the file before sending it back to me! (By the way, in case you didn’t know, I’m on the left, wearing yet another piece from my 1982 Rainbow Collection, and that’s Julie on the right, in the arms of some random Mountain Man at the 1982 World’s Fair.) Oh, and you can click on it if you want to see it in all its glory.

I wonder what Mom was thinking and saying when she came up with this photo idea. Let’s imagine it together, shall we? Leave a comment as if you’re my mom in 1982, when things were obviously safer and less worrisome than they are today!

Next post: And There Would Be No Orange Residue On My Fingers, Either!

Previous post: Yes! I Couldn’t Have Planned This Better If I Had Rigged The Test